Alpha decay is a type of radioactive decay in which an atomic nucleus emits an alpha particle (two protons and two neutrons bound together into a particle identical to a helium nucleus) and transforms (or 'decays') into an atom with a mass number 4 less and atomic number 2 less. For example:

although this is typically written as:

An alpha particle is the same as a helium-4 nucleus, and both mass number and atomic number are the same. 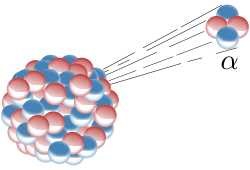 Gamma rays are often produced alongside other forms of radiation such as alpha or beta. When a nucleus emits an α or β particle, the daughter nucleus is sometimes left in an excited state. It can then jump down to a lower level by emitting a gamma ray in much the same way that an atomic electron can jump to a lower level by emitting visible light or ultraviolet radiation.

This video covers a session on the atomic nucleus. You will also understand...

This video explains the process of radioactivity in detail.

This video explains the mass-energy relation and the nuclear binding energy...

This video gexplains the types of radioactive decays