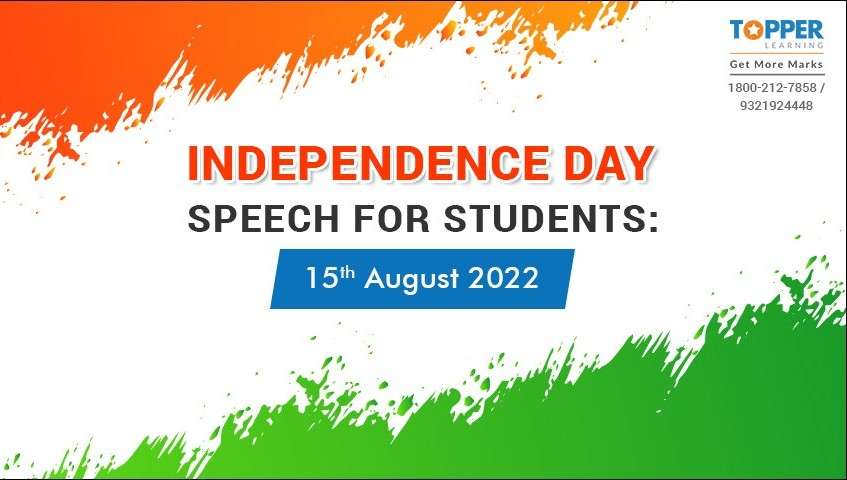 Read this article on Independence Day speech and get a sample of a long and short speech.

Since 1947, when the country became independent, India celebrated its independence day on the 15th of August every year. Every year on this day, the Prime Minister hoists the flag to honour the occasion. After the Prime Minister's address to the nation, a military parade is held, aired live across the country. In addition, the President delivers the Independence day speech.

Britishers have ruled India for more than 100 years, exploiting its citizens.  Many freedom fighters have sacrificed their lives to free India from slavery. Independence day speech is important to make people understand its importance. To let the younger generation know about India's freedom movement, many education facilities and other organisations organise Independence day speeches.

Mangal Pandey, a well-Indian freedom activist, is often regarded as the predecessor of the 1857 movement against the British, considered India's first battle for independence. Independence Day is noteworthy because it honours the bravery and spirit of the freedom warriors who battled for the nation's independence from British domination. Every year, Prime Ministers hoist the flag and address the nation from the Red Fort, recognising the day as national pride and honour.

Speeches To Deliver On Independence Day In English:

India is celebrating its 75th independence day today. Our honourable Prime Minister will be hoisting the flag at the Red Fort, Delhi. This will be followed by a military parade by our respected soldiers. It is indeed an eye-catchy event broadcasted in the entire country and watched by millions of Indian citizens.

I am a proud Indian to be born in an independent India and, therefore, would like to acknowledge the sacrifice of our freedom fighters. Country-wide celebration of this day shouldn't just be about a holiday, watching a patriotic movie on the television, or just grabbing a shop discount. Lokmanya Tilak, Sardar Vallabhbhai Patel, Bhagat Singh, Mangal Pandey, Sukhdev, and many more dreamed of Free India and fought for it till their last breath.

After the constitution went into action on January 26, 1950, India became a sovereign democratic republic. Every citizen was given rights and responsibilities. For example, the right to vote was immediately given to every Indian citizen after independence, whereas it took 150 years for America to give the same to its citizens.

India has achieved a lot after its independence. In the last 75 years, we all have witnessed the greatest events of all time, making us proud citizens of this country. On August 4, 1956, India built and designed Asia's first nuclear reactor, the Apsara nuclear reactor. We designed our first satellite, Aryabhatta, in 1975. We received Oscars for movies like Slumdog Millionaire, Mother India, etc.! We won our first-ever world cup under the captaincy of Kapil Dev.

Green Revolution, white revolution, demonetisation, strengthening the Indian army, surgical strikes, removal of article 370 from Kashmir, and many more revolutionary events were witnessed by Indians. India is the only country where people of different religions, castes, languages, cultures stay together happily under one roof. This Unity in diversity will not be seen anywhere in the world.

While celebrating the 75th independence day, we can not overlook the challenges we face. Corruption, illiteracy, women’s safety, poverty, pollution, etc. However, with the bold youth generation, revolutions are being witnessed. This will bring positive changes in the coming years.

I'd want to end by noting that no matter how often I celebrate my country's accomplishments, they will always be less. Our nation is our motherland, and we should always be grateful for all we have received from it.

Today, we are celebrating our 75th independence day; let us take a moment to acknowledge the efforts taken by our freedom fighters to free India from Britain’s hold. India celebrates this auspicious day with an absolute patriotic spirit. It's the most important day in Indian history as on this day, we became a free nation, and Pakistan was parted away from India.

Since its independence, India as a democratic country has achieved many milestones. India has the forth-strongest army in the world. It is a home for people with numerous castes and religions. Every citizen of India is given the right to freedom of speech, work, stay and follow the religion they wish to. Every festival is celebrated here with equal enthusiasm. Although Modern India still faces many challenges, unity among its citizens will do wonders for sure.

Our responsibility doesn't come to an end by celebrating it today. So many flags are seen in the dumpsters in the torn state. We all should learn to respect our national flag. Freedom is of utmost importance. Hence, we must know how to protect it!