For a geostationary satellite movin around the earth, calculate 1.Time period of revolution.2.Radius of parking orbit.3.Height from surfave of earth to satellite.

Dear Student
Geostationary satellites are located exactly above the earth’s equator and revolve around the earth in a circular orbit. Its revolving speed and direction (west to east) is exactly same as that of the earth, which makes it look stationary from the earth’s surface. 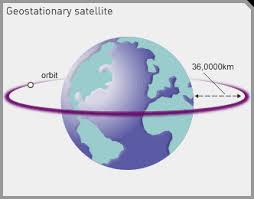 1. Time Period: Travels with a period equal to equal to the Earth's rotational period, i.e. one orbit takes 24 hours.
2. Radius of Parking orbit:

In any circular orbit, the centripetal force required to maintain the orbit is provided by the gravitational force on the satellite. To calculate the geostationary orbit altitude, one begins with this equivalence, and uses the fact that the orbital period is one sidereal day.

By Newton's second law of motion, we can replace the forces F with the mass m of the object multiplied by the acceleration felt by the object due to that force: