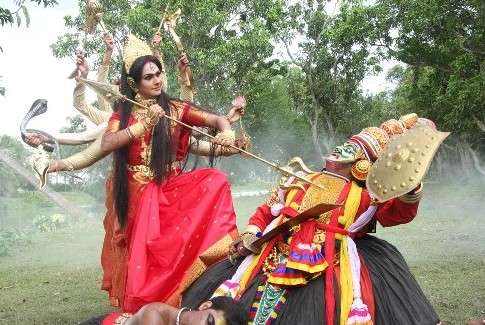 Durga Puja is widely celebrated across the world mostly among the Bengali community. It is especially popular in Bengal where life comes to a standstill for four days – Shashti, Mahasaptami, Mahaashtami, Mahanabami and Vijayadashami, which is the day of visarjan (immersion of Durga idols).

Durga has ten hands with ten different weapons gifted to her by the Devas (masters of heaven) to defeat the mighty demon-king Mahisasura who is half man and half buffalo. She is seen holding a trishul (trident) which is piercing through Mahisasura’s chest who is lying at her feet.

This has several connotations.  The victory of good over evil is celebrated. Many think that it also signifies the emancipation of women and their power (shakti) for the good of society. Both Durga and Asura rest inside us. Durga represents wisdom and Asura is our self-destructive ego. The killing of our ego and removing the cloud of ignorance inside us is the moment of enlightenment. Durga’s eyes are not only fierce but also kind and forgiving.

The traditional six-day countdown to Mahasaptami starts from Mahalaya, when the spirit of the Goddess descends on the Earth for four days. Mahalaya signifies the end of Pitri Paksha and the start of Devi Paksha.  Pitri Paksha holds great significance in all Bengali households where the eldest male member from each family pays homage to the ancestors.

It is the day when many throng to the banks of the River Ganga, clad in dhotis to offer prayers to their dead relatives and forefathers and to take a holy dip. This ritual is known as Torpon.

On this day, which is also the beginning of Devi Paksha, it is believed that the Devi (Goddess) starts her journey towards the Earth for her devotees. Many Bengalis get up early in the morning on this day to listen to the soul-stirring Mahalaya mantra, which invokes the spirit of the Devi to our world. Songs like Jago Tumi Jago (Awaken Thou Holy Spirit) are played afterwards.

In Ramayana, when Rama goes to Lanka to rescue his abducted wife, Sita, from the Demon king Ravana, he invokes the Goddess for her blessings. Durga being pleased with Ram’s devotion finally appears and showers her blessings.

The battle started on Saptami, and Ravana was finally killed on Sandhikshan [i.e. the crossover period between Ashtami (the next day) and Navami (the day after)]. Ravana was cremated on Dashami when Dussehra, the victory of Ram over Ravana, is celebrated.