Supermen of Malegaon is enjoyable

Armed only with a handicam and an unputdownable spirit, Sheikh Nasir, an amateur filmmaker in Malegaon, a small industrial town about 270 kms outside Mumbai, struggles to make his version of the Superman story, titled Malegaon Ka Superman. 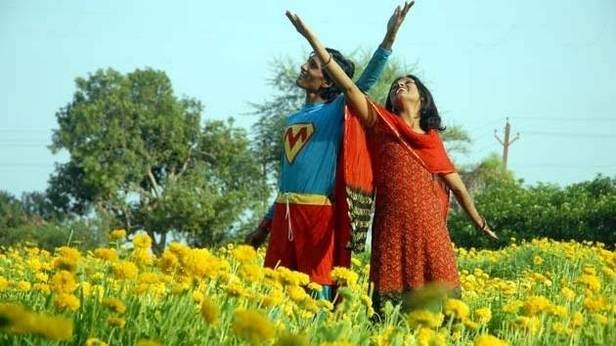 Armed only with a handicam and an unputdownable spirit, Sheikh Nasir, an amateur filmmaker in Malegaon, a small industrial town about 270 kms outside Mumbai, struggles to make his version of the Superman story, titled Malegaon Ka Superman.

But there are many hurdles to overcome…like raising the Rs 50,000 or so it will cost to make this film; finding a girl willing to play the damsel-in-distress in this conservative, mostly Muslim-populated town; and then there is that delicate business of figuring out how to make his superhero fly. In her charming documentary Supermen of Malegaon, Faiza Ahmed Khan casts a warm, affectionate eye on Nasir's bumpy journey to realize his dream.

Early on in the documentary, Nasir bemusedly wonders why so many people are credited for doing different jobs on a Bollywood film set. After all, he shoots, directs, produces and edits his own material, scours markets for his props, and sketches a design for the local tailor to stitch the superhero suit. He does have a handful of accomplices - a soulful writer who arrives on the set to recite the dialogues as the actors speak, and a sound technician-cum-dubbing artiste-cum-special effects whiz all rolled into one, who even shaves his head to play the Lex Luthor-like villain in Nasir's film. His lead actor is a spindly powerloom worker, Shafique, who comically channels Charlie Chaplin and Mr Bean when he plays Superman who must fight the evil of tobacco in Malegaon.

Expectedly, it's a far-from-smooth production. At one point the camera falls into a lake, another time the shoot must halt four days to accommodate Shafique's wedding, and on one occasion Superman slips into a ditch while performing a stunt. But these turn out to be small hiccups in the way of Nasir's sheer inventiveness and passion. It's hard not to gape in amazement as he mounts himself and his camera on a bullock-cart to take an up-down crane shot, or when he rides a cycle with assistants hurling him ahead when he desires a zoom.

Supermen of Malegaon cheerfully celebrates the enthusiasm and the commitment of this motley group to make the best possible superhero film they can. At roughly 65 minutes it's brisk, enjoyable, and will have you smiling from ear to ear.

I'm going with three-and-a-half out of five for Supermen of Malegaon. If you love the movies, make time for this one.

Bol Bachchan bites off more than it can chew