Home/ Blog /bol bachchan bites off more than it can chew

Bol Bachchan bites off more than it can chew

This is primarily why 'Bol Bachchan' fails. Look up at your screens. Is it a comedy? Is it a pulpy action flick? Is it a family drama espousing middle-class values? Why, it's all that and more, since the makers have left no equation unexplored. Had it foc 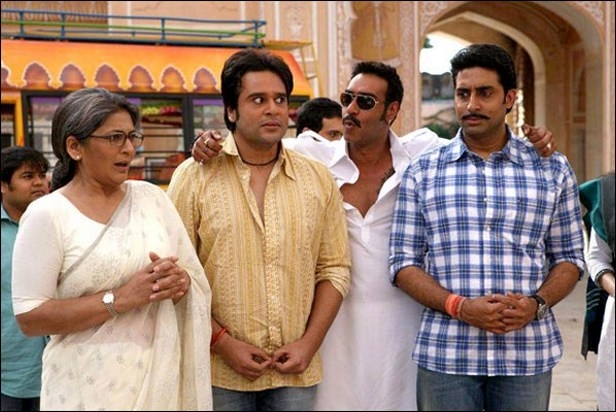 This is primarily why 'Bol Bachchan' fails. Look up at your screens. Is it a comedy? Is it a pulpy action flick? Is it a family drama espousing middle-class values? Why, it's all that and more, since the makers have left no equation unexplored. Had it focused on one (we'd have gone with comedy), it could have been a far more satisfying experience. But in trying to jam in every element that's ever clicked with audiences, 'Bol Bachchan' is at most a film that's mildly entertaining, but mostly exasperating.

What's it about?
'Bol Bachchan' starts off as a weepy tale of the brother-sister duo of Abbas (Abhishek Bachchan) and Sania (Asin) having lost their ancestral property to greedy poachers. Their kindly uncle Shastri (Asrani) whisks them away to Ranakpur, a small village that's run by Prithviraj (Ajay Devgn), a pehelwan who hates being lied too. A series of incidents forces Abbas to introduce himself as Abhishek Bachchan to the village and before you know it, lie upon lie is being spun to cover up the initial fib. It doesn't help that Abbas loses his heart to Prithviraj's sister Radhika (Prachi Desai), while Prithviraj nurses a soft spot for Sania. Soon Abbas is even forced to make up the character of an identical half-brother, and that's when all hell breaks loose.

Devgn as the megalomaniac, killer-English spouting pehelwan has the best lines ('Hard work is the keyhole to saxophone' is only one of the many gems). Archana Puran Singh as Abhishek's hired mother,  is a delight. The action sequences, that alternatively move in slow-motion and fast-forward, are also fun to watch once you shelve everything you learnt about Newton's laws of motion in grade eight into the far recesses of your brain.

But soon enough, the plot twists begin to gnaw at your last shreds of patience. The catch in the love story between Devgn and Asin feels wholly unnecessary and hurriedly contrived. Abhishek's comic timing is mostly off by a mile. The movie's humour works, but the liberal sprinkling of action sequences and boo-hoo melodrama throws the flick off a track that could have clicked.

What to do?
Wait for the television premiere, unless you have absolutely nothing better to do this weekend. Or rent out the original 'Gol Maal' - a sure proof chuckle-fest.

Supermen of Malegaon is enjoyable