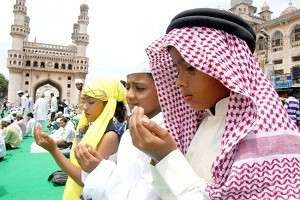 Perhaps the most well-known Muslim practices among non-Muslims is ritual prayer, or salat, which is performed five times each day: at dawn (al-fajr), midday (al-zuhr), afternoon (al-'asr), sunset (al-maghrib) and evening (al-'isha). Exact prayer times for

Perhaps the most well-known Muslim practices among non-Muslims is ritual prayer, or salat, which is performed five times each day: at dawn (al-fajr), midday (al-zuhr), afternoon (al-'asr), sunset (al-maghrib) and evening (al-'isha). Exact prayer times for your area can be calculated here.

Prayer is always directed in the direction (qibla) of the Ka'ba shrine in Mecca. A prayer mat, sajjada, is commonly used during salat. Salat may be performed individually, but it carries special merit when done with other Muslims. The focal prayer of the week is the midday prayer at the mosque on Fridays.

Salat must always be preceded by ablutions (wudu') of ritually washing the face, hands, and feet. This can be done with sand when water is not available. (Qur'an 5:6; also 2:222, 4:43.) (See Islamic-Paths.org for a detailed article on the ritual of ablutions.)

At the five appointed times, a muezzin announces a call to prayer (adhan), traditionally from a mosque's minaret. The words of the shahada feature heavily in the call to prayer:

In modern times, the muezzin is usually heard on the radio. One can also utilize a service such as the "salat pager," which sends a reminder to the believer's pager as prayer times approach.

When performing salat at the mosque, worshippers are aligned in parallel rows behind the prayer leader (imam), who directs them through the rak'as (prescribed postures and recitations).

Islamic prayer begins in a standing position and moves through several simple postures until the supplicant is kneeling. (IslamicVoice.com has an illustrated guide to the rak'as, with an emphasis on the health benefits of the postures.) Specified recitations are said in each posture.

The content of prayer is glorification of God, recitations of the Qur'an, and blessings on the Prophet. Salat concludes with the taslima (greeting), "Peace be upon you," even when praying alone.

In addition to the regular prayer times, special congregational prayers take place just after noon on Fridays and mid-morning on the two major holidays. Individual devotional prayers, though not obligatory, are encouraged, especially during the night (tahajjud).