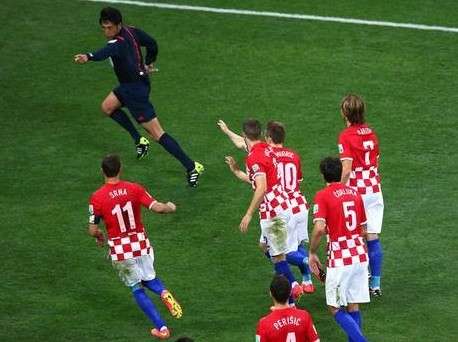 Refereeing hit its all-time-low when Ecuadorian official, Carlos Vera, awarded a penalty to Greece’s Samaras in a crucial do-or-die match against Ivory Coast. Replays clearly showed that Samaras tripped on his own with minimum interference from Ivory Coast’s defender Giovanni Sio. The Ivory Coast players were left in dismay as Greece toppled them to move to the next round. This controversial penalty decision, not a first in this tournament, gave an added importance to the FIFA president Sepp Blatter’s plan to introduce video referees.

Blatter, who had been an opponent of the goal-line technology, took a complete U-turn to include the feature in this year’s tournament after English player, Frank Lampard, was denied a goal against Germany in the last World Cup.

“Why don’t we give team managers the possibility of two challenges for refereeing during a match? If a manager disagrees with a decision, he could ask for an immediate TV review with a referee.”

Blatter’s revolutionary idea has attracted a lot of criticisms. The International Football Association chief executive, Stewart Regan countered by saying, “It would be a complete departure from what we’ve said so far in that goal-line technology is black and white. If a manager has an appeal and that results in the game being stopped, that interferes with how you and I understand football operates.”

Almost all popular games in today’s world like cricket and tennis have used technology to good use to reduce errors--errors which we can do without.

In this World Cup, what is done cannot be undone. However, it’s high time that after these controversial penalties, Blatter’s idea should be implemented. A bad decision can break millions of hearts or morale of players who have toiled hard for 4 years just to get a shot at the coveted cup.

With the advent of technology, the fans and players could be spared of such a horror in the near future.

The penalty, which was awarded to Brazil, which showed that there was no intentional foul made by the Croatian defender.

“If that was a penalty we don’t need to play football any more.”