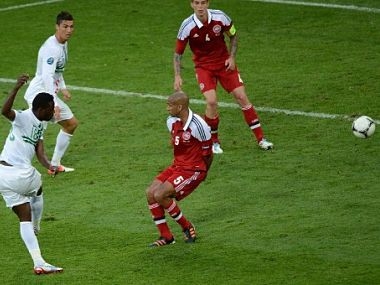 The Group of Death produced another thrilling encounter as Portugal won 3-2 against a resilient Denmark who had clawed back to equalise, only to be stunned with a late strike.

Centre-back Pepe thumped in a header to give Portugal the lead before Helder Postiga swept in Nani’s cross. Nicklas Bendtner took advantage of a defensive error to head in for Denmark but it was not enough to give them anything from an open game.

As Ronaldo spurned a glorious one-on-one chance on one end, Bendtner rose in to smash a header off the post to equalise in style.


But Portugal had an ace in their pack as substitute Silvestre Varela broke Danish hearts with an 86th minute strike.  The winger found a bit of space in the box and swiveled to pack a powerful volley into the back of the net.

Ronaldo’s match started off with a few shakes of his head as he demanded better service from his teammates but he slowly got into his stride, proving to be a constant threat from distance.

But it took a corner from Joao Moutinho for Pepe to steal ahead of his markers and glance in a header which was almost identical to the one Andriy Shevchenko scored for Ukraine against Sweden.

Portugal’s dominance was justified after a weak clearance made it’s way to Nani. The Manchester United winger found some space to lay it up for Postiga, who struck the low cross first time and into the roof of the net.

It made him only the sixth player to score at three different Euros.

Denmark poured forward in the second half, crossing in at every opportunity and forcing the Portuguese to defend deep and hang on to keep the lead.

As Ronaldo kept missing on one end, Denmark kept knocking on the door and finally leveled the score in the 80th minute.

The late winner from Varela means that Portugal are also on three points in a group which could be decided in the final round of matches.