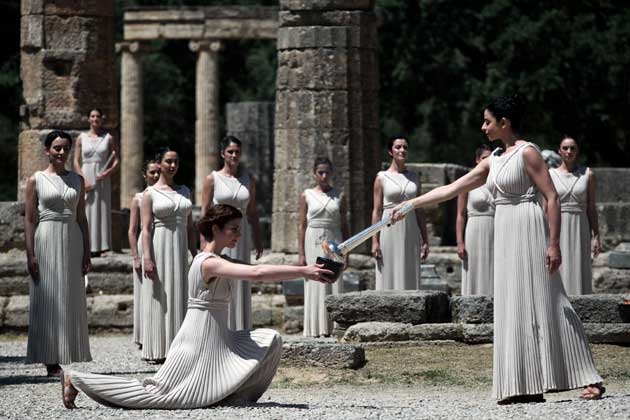 A high priestess passes on the Olympic flame she has just lit using a concave mirror.(AP Photo)

A high priestess, holding a lit torch and an olive branch. (AP Photo)

The flame, lit in the birthplace of the Ancient Olympics, will travel to London, where the Summer Games will take place from July 27-Aug. 12. (AP Photo)

Actress as high priestess Ino Menegaki passes on the Olympic flame to Spyros Gianniotis, a 32-year-old Liverpool-born swimmer, who won a silver medal for Greece in the 5-kilometer open water event four years ago in Beijing . (AP Photo)

An actress as a high priestess, lights the Olympic flame using a concave mirror to concentrate the sun's rays during the lighting of the flame ceremony. (AP Photo)

Sushil Kumar to be India's flag bearer at Olympics