Shiva is a major God in the Hindu panteon. In the Shaiva tradition of Hinduism, he is the Supreme God, and in the Smarta tradition he is one of the five main forms of God.

Shiva is a major God in the Hindu panteon. In the Shaiva tradition of Hinduism, he is the Supreme God, and in the Smarta tradition he is one of the five main forms of God. Shiva is depicted having a Trident in the right lower arm, with a crescent moon on his head. He shown to be as fair as camphor or like an ice clad mountain. He has fire and Damaru and Mala or a kind of weapon. He wears five serpents as ornaments. He wears a garland of skulls. He is pressing with his feet the demon Muyalaka, a dwarf holding a cobra. He faces south. Panchakshara itself is his body. It is believed that Shiva became a god through meditating everyday. 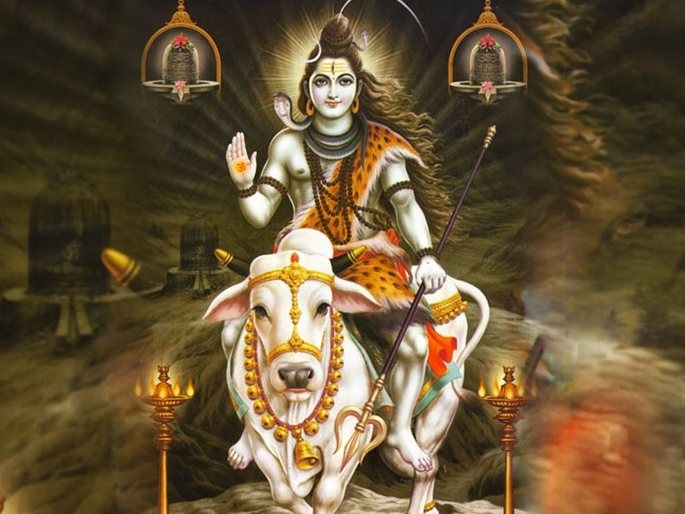 The shape of the moon gives us an idea of time. The crescent moon on Shiva's head signifies his control over time.

The snake coiled three times around his neck represents the past, present and future-time in cycles. The deadly cobra which is worn as an ornament by him symbolises his control over time and death.

Shiva is often referred to as Tryambaka Deva, meaning "three-eyed Lord". The sun is said to be his right eye, the moon the left eye while fire is his third eye. While his other two eyes indicate his activity in the physical world, his third eye in the center of his forehead looks beyond the obvious. It stands for spiritual knowledge and power, and is thus called the eye of wisdom or knowledge.

He is almost always shown as wearing a necklace having 108 beads made with seeds of the Rudraksha tree. The beads represent the elements used in the creation of the world. The word 'Rudra' means "strict or uncompromising" and aksha means "eye." It illustrates the fact that Lord Shiva is firm about His cosmic laws and strictly maintains law and order in the universe.

Shiva wears the skin of the tiger, elephant and deer. The tiger stands for energy, thus symbolising his power over all the energies present in the universe.

Elephants stand in for pride while deer represent the flickering mind. Wearing elephant and deer skin shows that Lord Shiva has conquered both these vices.

His unclad body smeared with ashes points out that his presence is much more higher than any physical phenomenon. The ashes on his boyd are cemetry ashes, which indicates that death is the ultimate reality of life. Hence he is also called the God of destruction. But Shiva is beyond the cycle of birth and death.

The flow of his matted hair is a representation of the breath present in all living beings.

The sacred Ganga flows thru Shiv's matted hair, because of this he is also known as the Gangadhara or "bearer of the Ganges". This proves that Shiva is not only the representation of destruction but also the bestower of knowledge, purity and peace.

Shiva's half open eyes symbolise that the cycle of the universe is in process, with no beginning and no end.

Shiva's particular weapon is the trident. His Trisul that is held in His right hand represents the three Gunas—Sattva, Rajas and Tamas. That is the emblem of sovereignty. He rules the world through these three Gunas.

The three lines made of ashes on his forehead are a symbol of his immortality.

The Kundalas refer to the two ear rings, Alakshya (meaning "which cannot be shown by any sign") and Niranjan (meaning "which cannot be seen by mortal eyes"), worn by the Lord. The ornaments in the ears of the Lord signify that He is beyond ordinary understanding. It is noteworthy that the kundala in the left ear of the Lord is of the type used by women and the one in His right ear is of the type used by men. The dual type of Kundalas represent the Shiva and Shakti (male and female) principle of creation.

The water pot (Kamandalu) often shown adjacent to the Lord is another of his accessories. It is said to be made from a dry pumpkin and containing amrit (nectar). The carrying of the Kamandalu shows the yogic nature of the Lord. But it has a deeper significance. As a ripe pumpkin has been plucked from a plant, its fruit removed and shell cleaned for containing the nectar, an individual too must give up his attachment to the physical world and clean his inner self of egoistic desires to experience the bliss of the Self, symbolized by the nectar in the Kamandalu.

His blue throat refers to a story in which Shiva drank the poison churned up from the ocean. This shows that he is the withholder of all evil things.

His holding deer on one hand indicates that He has removed the Chanchalata (tossing) of the mind. Deer jumps from one place to another swiftly. The mind also jumps from one object to another.

Shiva rides Nandi(bull), his association with cattle is reflected in his name Pashupati"lord of cattle". The bull represents Dharma Devata(Rishabh). This denotes that Lord Shiva is the protector of Dharma or is an embodiment of Dharma or righteousness.

Shiva holds a Damaru in one of his hands in a specific gesture called 'damaru-hasta'. The two sides of the drum separated from each other by a thin neck-like structure represents the two utterly different states of existence, unmanifest and manifest. When the damaru is shaken, it produces Nada, the cosmic sound of Aum, which can be heard during deep meditation. According to Hindu scriptures, Nada is the source of creation. This is one of the attributes of Shiva in his
famous dancing representation known as Nataraja.


Disclaimer- This article based on various descriptions written in various Hindu religious scriptures.