Greed and excessive desire always meets a gruesome end and also help your friends in need.

Let me tell you of a time when Lord Shiva himself got into trouble….

Many ages ago…there lived a wicked and foolish demon called Bhasmasura. He decided to pray to Lord Shiva to fulfill his evil desires and performed rigorous penance (tapasya) for thousands of years in a desolate place. Shiva happy with his prayers appeared in front of him and agreed to grant him a boon. 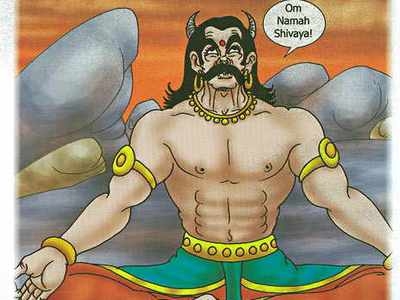 The evil Bhasmasura asked Shiva to fulfill his wish that if he touched anybody with his right hand, he would be reduced to ashes. Shiva said ‘tathastu’ and Bhasmasura’s joy knew no bounds.Bhasmasura told Shiva that he wanted to test his boon. Since there was nobody around, the wicked Bhasmasura said that he would test it on Lord Shiva himself. Poor Lord Shiva fled from there. He started running and Bhasmasura was following him.

Lord Shiva crossed vaikuntha – Lord Vishnu’s heavenly abode while running. When Vishnu saw him and Bhasmasura in hot pursuit, he realised what had happened. He decided to help his best friend Shiva and took the form of a grogeous women called Mohini and approached Bhasmasura.

Bhasmasura was bewitched by Mohini’s beauty proposed to her. Mohini however refused his hand in marriage saying that she would accede only if Bhasmasura agreed that Mohini would be his only wife. The demon agreed but Mohini – the intelligent woman that she was refused to accept his word.

Bhasmasura entreated Mohini and she finally told him that he should touch his forhead with his right hand and swear that she would be his only wife. The foolish and arrogant Bhasmasura touched his forehead and was immediately reduced to ashes…

Note: This story is a puranic tale and one form has been retold here.