One always seems to be undecided on the options to consider before setting out to buy a PC. While assembling your own PC may have its own merits, one would have to do a bit of searching to configure their own rig. Manufacturers such as Lenovo, Acer, HCL,

One always seems to be undecided on the options to consider before setting out to buy a PC. While assembling your own PC may have its own merits, one would have to do a bit of searching to configure their own rig. Manufacturers such as Lenovo, Acer, HCL, Dell, among others have all successfully launched their desktop PCs in the market. One of the world’s most well known PC manufacturers, Dell launched the Dell Inspiron 620s desktop PC, which features Intel’s 2nd Generation Core processors, HD multimedia capabilities, and dressed in a range of colours. 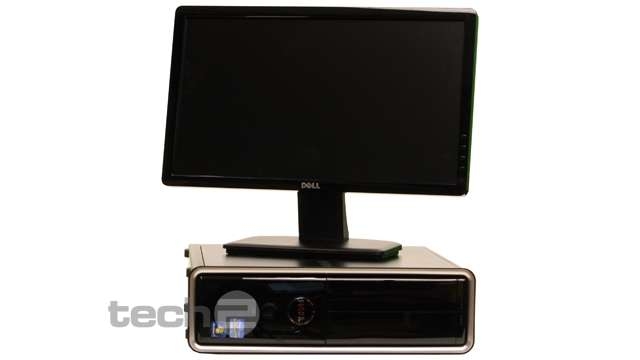 The Dell Inspiron 620s follows up from a previous release from Dell, which had the same name - 620s. The rehashed version of the 620s desktop comes with a slimmer form factor. That being said, only the tower is slimmer, as compared to its predecessor. The new version comes bundled up with a monitor, a keyboard and a mouse.

The front panel of the cabinet of the 620s is finished in glossy black with silver border. Style and class is what Dell have gone with while manufacturing this OEM PC. Quick access connectors like USB ports, audio and mic jacks along with a memory card reader are all located in a bay on the front right of the cabinet. To left of it lies an optical drive. Unlike the previous model of the 620s, Dell has positioned the optical drive vertically to maintain the slim design. The connectors are located in the bay to the right of the optical drive and the bay can be opened by pushing a button located on top of it. With the review piece that we received, we noticed that the USB ports were a bit narrow and trying to insert a drive in them became quite a task. The cabinet can be placed sideways, so it can rest on four rubberized legs located along the four corners. This makes a lot of sense as it helps in further reducing the amount of space taken. Other connections are located at the back. These include an HDMI port, six USB 2.0 ports, an ethernet port, VGA port and audio connectors.

The bundled up monitor that comes along with this OEM PC is a Dell In1920 HD monitor. The monitor on a whole, seemed quite sturdy, but we had a problem with the stand. The stand was a bit wobbly and this was a bit annoying, even though the display was attached well. The keyboard and mouse that came with this review unit were well-built and we faced no issues with it, whatsoever.

The Dell 620s is stylish, yet simple in design. This PC will definitely not win any beauty contests, but it is not the ugliest looking desktop in the market. Apart from the monitor wobbling and the issue we faced with the USB ports in the front, the overall build quality of this PC was good.

How to Re-use Your Old Notebook as a Second TV