17-year-old boy is the fastest texter in US

A 17-year-old boy who says he has "abnormally fast thumbs" has been named the fastest texter in America for the second year in a row.

New York: A 17-year-old boy who says he has "abnormally fast thumbs" has been named the fastest texter in America for the second year in a row. "It feels incredible," said Austin Wierschke of Rhinelander, Wis., after winning the sixth annual US LG National Texting Competition in Times Square on Wednesday. He gets $ 50,000 in prize money, which he says he'll save and use to pay for college, along with the $50,000 he won last year.

Eleven contestants from around the US competed, all using the same type of cellphone, an LG Optimus Zip phone with QWERTY keyboard. Cellphone-maker LG Electronics sponsored the contest.

The competition tested three skills - speed, accuracy and dexterity - on four different challenges. They were "do you know text speak?", in which contestants had to spell out text abbreviations; texting while blind-folded; "text blitz," where phrases were shown to the contestants for a length of time and they copied them as fast as they could; and texting backward, where jumbled words were given to the contestants and they had to figure out the word. 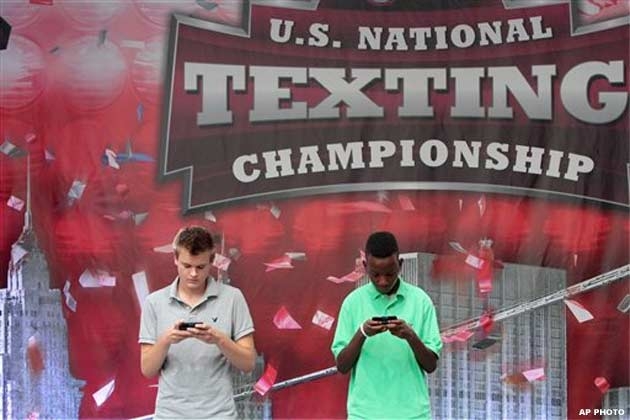 To practice for the competition, the 17-year-old champion said he sent almost 500 texts a day to his friends.

Runner-up Kent Augustine, 16, from Queens, said he was "a little disappointed," but he won't be walking away empty-handed, since the second-place winner gets $10,000. He said he was going to try again next year.

Fellow competitor Kelly Barracato was not surprised that Wierschke won. She said she noticed that during the press tour, "his thumbs were flying."

Anita Levine, 16, and Anan Arias, 17, came out to see the competition.

Arias is an avid texter who says she sends more than 100 texts a day. "Texting is part of the new generation," she said.

Levine said she loves texting but her father won't let her. "My dad thinks it is pointless," she said.

Jan and Lori Emanuele, both in their 50s, were curious to see the competition. Both text often but say it can sometimes get a bit overwhelming.

"When I first saw 'ttyl,' I thought, 'what is that?'" Jan Emanuele said. TTYL stands for talk to you later.

Google's Olympics Doodles: The Inside Story