i am srry this is not on this topic.i have heard that venus would create a solar eclipse on 21-12-2012 and that all planets and the sun will align in a line which happens once in a line.is this true?

In the Solar system the planets and the Sun lie roughly within the same flat plane, known as the plane of the ecliptic, From our perspective on Earth, the ecliptic is the path taken by the Sun across the sky over the course of the year. The twelve constellation that line the ecliptic are known as the zodiacal constellations and, annually, the Sun passes through all of them in turn. Additionally, over time, the Sun's annual cycle appears to recede very slowly backward by one degree every 72 years, or by one constellation approximately every 2,160 years. This backward movement, called "precission", is due to a slight wobble in the Earth's axis as it spins, and can be compared to the way a spinning top wobbles as it slows down.Over the course of 25,800 years, a period often called a Great year, the Sun's path completes a full, 360-degree backward rotation through the zodiac.In Western astrological traditions, precession is measured from the March equinox, one of the two annual points at which the Sun is exactly halfway between its lowest and highest points in the sky. Presently, the Sun's March equinox position is in the constellation Pisces and is moving back into Aquarius. This signals the end of one astrological age (the Age of Pisces) and the beginning of another.

It is important to define what the Galactic Alignment is in precise astronomical terms. (See the Glossary below for terms.)

The Galactic Alignment is the alignment of the December solstice sun with the Galactic equator. This alignment occurs as a result of the precession of the equinoxes.

Precession is caused by the earth wobbling very slowly on its axis and shifts the position of the equinoxes and solstices one degree every 71.5 years. Because the sun is one-half of a degree wide, it will take the December solstice sun 36 years to precess through the Galactic equator (see diagram below).

The precise alignment of the solstice point (the precise center-point of the body of the sun as viewed from earth) with the Galactic equator was calculated to occur in 1998 (Jean Meeus, Mathematical Astronomy Morsels, 1997).

This Galactic Alignment occurs only once every 26,000 years, and was what the ancient Maya were pointing to with the 2012 end-date of their Long Count calendar. 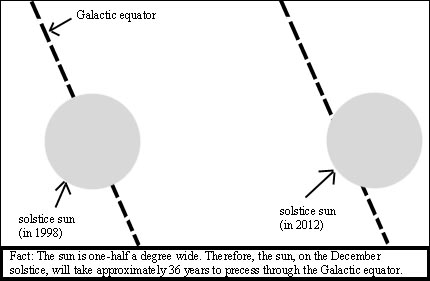