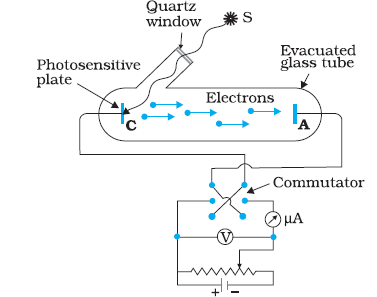 Figure given above depicts a schematic view of the arrangement used for the experimental study of the photoelectric effect.
It consists of an evacuated glass/quartz tube having a photosensitive plate C and another metal plate A.
Monochromatic light from the source S of sufficiently short wavelength passes through the window W and falls on the
photosensitive plate C (emitter). A transparent quartz window is sealed on to the glass tube, which permits ultraviolet radiation
to pass through it and irradiate the photosensitive plate C. The electrons are emitted by the plate C and are collected by
the plate A (collector), by the electric field created by the battery.
The battery maintains the potential difference between the plates C and A, that can be varied.
The polarity of the plates C and A can be reversed by a commutator. Thus, the plate A can be maintained at a desired
positive or negative potential with respect to emitter C. When the collector plate A is positive with respect to the emitter plate C,
the electrons areattracted to it. The emission of electrons causes flow of electric current in the circuit. The potential difference
between the emitter and collector plates is measured by a voltmeter (V) whereas the resulting photo current
flowing in the circuit is measured by a microammeter (μA). The photoelectric current can be increased or decreased by
varying the potential of collector plate A with respect to the emitter plate C. The intensity and frequency of the incident light
can be varied, as can the potential difference V between the emitter C and the collector A.
The experimental arrangement is used to study the variation of photocurrent with
(a) intensity of radiation,
(b) frequency of incident radiation,
(c) the potential difference between the plates A and C, and
(d) the nature of the material of plate C.
Light of different frequencies can be used by putting appropriate coloured filter or coloured glass in the path of light falling
on the emitter C. The intensity of light is varied by changing the distance of the light source from the emitter.
(1) Effect of intensity of light on photocurrent
The collector A is maintained at a positive potential with respect to emitter C so that electrons ejected from C are
attracted towards collector A. Keeping the frequency of the incident radiation and the accelerating potential fixed, the
intensity of light is varied and the resulting photoelectric current is measured each time. It is found that the photocurrent
increases linearly with intensity of incident light . The photocurrent is directly proportional to the number of photoelectrons emitted per
second. This implies that the number of photoelectrons emitted per second is directly proportional to the intensity
of incident radiation.
(2) Effect of potential on photoelectric current 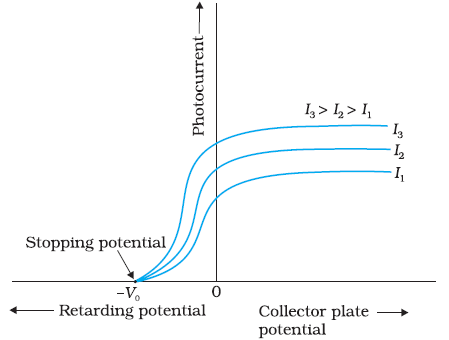 is frequency of radiation and w is workfunction.