Sound is caused due to vibrations of a body.

Sound is a form of energy that produces the sensation of hearing in our ears. Sound is produced by a vibrating body.

Experiment: A tuning fork is taken and its one arm is struck on a rubber pad and it is brought near a tennis ball suspended by a thread as shown in figure. 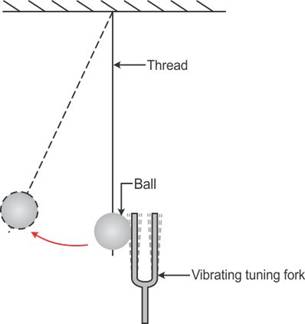 Experiment to demonstrate that a material medium is necessary for the propagation of sound:

An electric bell is suspended inside an airtight glass bell jar. The bell jar is connected to a vacuum pump as shown in figure. As the circuit of electric bell is completed by pressing the key, the hammer of the electric bell begins to strike the gong repeatedly due to which sound is heard.

Keeping the key pressed, air is gradually withdrawn from jar by starting the vacuum pump. It is noticed that the loudness of sound goes on decreasing as the air is taken out from the bell jar and finally no sound is heard when all the air from the jar has been drawn out. The hammer of the electric bell is still seen striking the gong repeatedly which means that sound is still produced but it is not heard.

When the jar is filled with air, the vibrations produced by the gong are carried by the air to the walls of jar which in turn set the air outside the jar in vibration and sound is heard by us but in absence of air, sound produced by bell could not travel to the wall of the jar and thus no sound is heard. It proves that material medium is necessary for the propagation of sound waves.

We cannot hear each other on moon's surface because there is no air on moon and for sound to be heard, a material medium is necessary.

Requisites of the medium for propagation of sound:

(i) The medium must be elastic.

(ii) The medium must have inertia.

(iii) The medium should be frictionless.

Take a vertical metal strip with its lower end fixed and upper end being free to vibrate as shown in fig (a).

As the strip is moved to right from a to b as shown in Fig (b), the air in that layer is compressed (compression is formed at C). The particles of this layer compress the layer next to it, which then compresses the next layer and so on. Thus, the disturbance moves forward in form of compression without the particles themselves being displaced from their mean positions.

As the metal strip returns from b to a as shown in Fig (c) after pushing the particles in front, the compression C moves forward and particles of air near the strip return to their normal positions.

When the strip moves from a to c as shown in Fig (d), it pushes back the layer of air near it towards left and thus produces a low pressure space on its right side i.e. layers of air get rarefied. This region is called rarefaction (rarefaction is formed at R).

Thus, one complete to and fro motion of the strip forms one compression and one rarefaction, which together form one wave. This wave through which sound travels in air is called longitudinal wave. 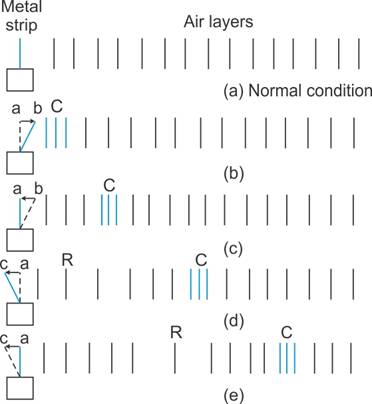 Sound travels in a medium in form of longitudinal and transverse waves.

A type of wave motion in which the particle displacement is parallel to the direction of wave propagation is called a longitudinal wave. It can be produced in solids, liquids as well as gases.

A type of wave motion in which the particle displacement is perpendicular to the direction of wave propagation is called a transverse wave. It can be produced in solids and on the surface of liquids.

A longitudinal wave propagates by means of compressions and rarefactions.

A crest is a point on the transverse wave where the displacement of the medium is at a maximum.

A point on the transverse wave is a trough if the displacement of the medium at that point is at a minimum.

Experiment to show that in a wave motion, only energy is transferred, but particles of the medium do not move:

If we drop a piece of stone in the still water of pond, we hear a sound of stone striking the water surface. Actually a disturbance is produced in water at the point where the stone strikes it. This disturbance spreads in all directions radially outwards in form of circular waves on the surface of water.

If we place a piece of cork on water surface at some distance away from the point where the stone strikes it, we notice that cork does not move ahead, but it vibrates up and down, while the wave moves ahead. The reason is that particles of water (or medium) start vibrating up and down at the point where the stone strikes. These particles then transfer their energy to the neighboring particles and they themselves come back to their mean positions. Thus only energy is transferred but the particles of the medium do not move.

The maximum displacement of the particle of medium on either side of its mean position is called the amplitude of wave.

Its SI unit is metre.

The number of vibrations made by the particle of the medium in one second is called the frequency of the wave. It can also be defined as the number of waves passing through a point in one second.

Frequency of a wave is the reciprocal of the time period.

The distance travelled by a wave in one second is called its wave velocity.

Let the velocity of a wave be V, time period T, frequency

. By the definition of wavelength,

Wavelength = Distance travelled by the wave in one time period i.e., in T second

The speed of sound in a medium depends upon its elasticity and density.

(i) No, sound cannot travel in vacuum as it requires a material medium for its propagation.

(ii) Speed of sound is maximum in solids, less in liquids and least in gases.

This happens because the light travels much faster than sound.

(i) The diver would hear the sound first.

(ii) This is because sound travels faster in water than in air.

(iii) It would take 0.25t to reach the diver because sound travels almost four times faster in water.

(i) Frequency of sound has no effect on the speed of sound.

(ii) Speed of sound increases with the increase in the temperature of sound.

(iii) Pressure of sound has no effect on the speed of sound.

(iv) Speed of sound increases with the increase in presence of moisture in air.

(i) Speed of sound does not change with a change in amplitude.

(ii) Speed of sound does not change with a change in wavelength.

Speed of sound is more in humid air because in presence of moisture, the density of air decreases and sound travels with greater speed.

The simple experiment that a person can do to calculate the speed of sound in air is that a person stands at a known distance (d meter) from the cliff and fires a pistol and simultaneously start the stopwatch. He stops the stopwatch as soon as he hears an echo. The distance travelled by the sound during the time (t) seconds is 2d. So, speed of sound = distance travelled / time taken = 2d/t

The approximation made is that speed of sound remains same for the time when the experiment is taking place.

Sound needs medium, but light does not need medium for its propagation.

Given, heart beats 75 times a minute

Separation between two consecutive compressions is the wavelength of a wave.

Frequency of wave = number of waves per second

Distance between the two observers = 1650 m

Thus, B will hear the sound 5s after the gun is shot.

Time in which sound of fire is heard after flash is seen (t) = 2.5s

Time taken by the observer to hear the sound of the first tank A= 3.5s

Distance between the two tanks = 510m

The audible range of frequency for humans is 20 Hz to 20 kHz.

Sounds of frequency above 20 kHz are called ultrasound.

The approximate speed of ultrasound in air is 330 m/s-1.

Two properties of ultrasound which make it useful to us are:

(i) Ultrasound is used for drilling holes or making cuts of desired shape in materials like glass.

(ii) Ultrasound is used in surgery to remove cataract and in kidneys to break the small stones into fine grains.