Pressure in Fluids and Atmospheric Pressure Exercise Ex 4(A)

Thrust is the force acting normally on a surface.

Pressure is the thrust per unit area of the surface.

(a) Pressure is measured in 'bar'.

One pascal is the pressure exerted on a surface of area 1 m2 by a force of 1N acting normally on it.

Thrust is a vector quantity.

Pressure is a scalar quantity.

Thrust is the force applied on a surface in a perpendicular direction and it is a vector quantity. The effect of thrust per unit area is pressure, and it is a scalar quantity.

The tip of an allpin is made sharp so that large pressure is exerted at the sharp end and it can be driven into with less effort.

(a) It is easier to cut with a sharp knife because even a small thrust causes great pressure at the edges and cutting can be done with less effort.

(b) Wide wooden sleepers are placed below the railway tracks so that the pressure exerted by the rails on the ground becomes less.

A substance which can flow is called a fluid.

Due to its weight, a fluid exerts pressure in all directions; the pressure exerted by the fluid is called fluid pressure.

Take a can or large plastic bottle filled with water. Place it on a horizontal surface. Make a series of holes in the wall of the vessel anywhere below the free surface of the liquid. The water spurts out through each hole. This shows that the liquid exerts pressure at each point on the wall of the bottle. 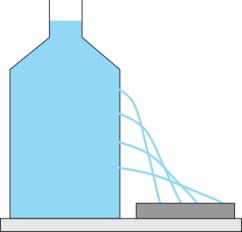 Liquid exerts pressure at all points in all directions

Pressure at a point in a liquid depends upon the following three factors:

(i) Depth of the point below the free surface.

(iii) Acceleration due to gravity.

Here, P = Pressure exerted at a point in the liquid

h = Depth of the point below the free surface

= Density of the liquid

g = Acceleration due to gravity

Consider a vessel containing a liquid of density 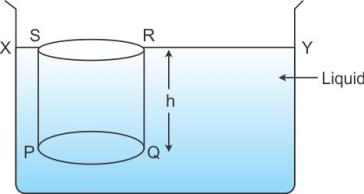 = Weight of the liquid column PQRS

This thrust is exerted on the surface PQ of area A. Therefore, pressure is given as shown below.

The pressure exerted by a liquid increases with its depth. Thus as depth increases, more and more pressure is exerted by water on wall of the dam. A thicker wall is required to withstand greater pressure, therefore, the thickness of the wall of dam increases towards the bottom.

(i) Pressure at a point inside the liquid increases with the depth from its free surface.

(ii) In a stationary liquid, pressure is same at all points on a horizontal plane.

(iii) Pressure is same in all directions about a point in the liquid.

(iv) Pressure at same depth is different in different liquids. It increases with the increase in the density of liquid.

(v) A liquid seeks its own level.

The liquid from hole B reaches a greater distance on the horizontal surface than that from hole A.

This explains that liquid pressure at a point increases with the depth of point from the free surface.

(i) As the diver moves to a greater depth, pressure exerted by sea water on him also increases.

(ii) When the diver moves horizontally, his depth from the free surface remains constant and hence the pressure on him remains unchanged.

Pascal's law states that the pressure exerted anywhere in a confined liquid is transmitted equally and undiminished in all directions throughout the liquid.

The principle of a hydraulic machine is that a small force applied on a smaller piston is transmitted to produce a large force on the bigger piston.

Hydraulic press and hydraulic brakes work on this principle.

It states that a small force applied on a smaller piston is transmitted to produce a large force on the bigger piston.

Use: It is used for squeezing oil out of linseed and cotton seeds.

(ii) When the lever is moved down, valve B closes and valve A opens, so the water from cylinder P is forced into the cylinder Q.

(iv) When the release valve is opened, the ram (or press) plunger Q gets lowered and water of the cylinder Q runs out in the reservoir.

Working: When handle H of the lever is pressed down by applying an effort, the valve V opens because of increase in pressure in cylinder P. The liquid runs out from the cylinder P to the cylinder Q. As a result, the piston B rises up and it raises the car placed on the platform. When the car reaches the desired height, the handle H of the lever is no longer pressed. The valve V gets closed (since the pressure on the either side of the valve becomes same) so that the liquid may not run back from the cylinder Q to cylinder P. 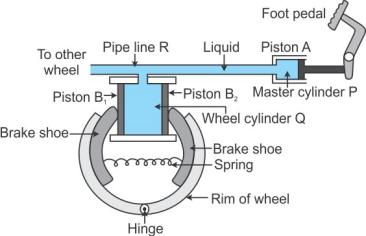 Working: To apply brakes, the foot pedal is pressed due to which pressure is exerted on the liquid in the master cylinder P, so liquid runs out from the master cylinder P to the wheel cylinder Q. As a result, the pressure is transmitted equally and undiminished through the liquid to the pistons B1 and B2 of the wheel cylinder. Therefore, the pistons B1 and B2 get pushed outwards and brake shoes get pressed against the rim of the wheel due to which the motion of the vehicle retards. Due to transmission of pressure through the liquid, equal pressure is exerted on all the wheels of the vehicle connected to the pipe line R.

On releasing the pressure on the pedal, the liquid runs back from the wheel cylinder Q to the master cylinder P and the spring pulls the break shoes to their original position and forces the pistons B1 and B2 to return back into the wheel cylinder Q. Thus, the brakes get released. 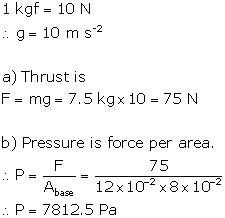 Area of cross section of piston A = 8 cm²

ii) According to Pascal's law,

iii)  Thrust acting on piston B in the upward direction

Thrust acting on piston B in upward direction = 160 kgf

In a hydraulic machine 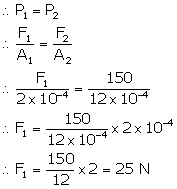 Pressure in Fluids and Atmospheric Pressure Exercise Ex 4(B)

Atmospheric pressure is measured in 'torr'.

At normal temperature and pressure, the barometric height is 0.76 m of Hg at sea level which is taken as one atmosphere.

Take a thin can fitted with an airtight stopper. The stopper is removed and a small quantity of water is boiled in the can. Gradually the steam occupies the entire space of can by expelling the air from it [Fig (a)]. Then stopper is then tightly replaced and simultaneously the flame beneath the can is removed. Cold water is then poured over the can.

It is observed that the can collapses inwards as shown in fig (b).

Consequently, the excess atmospheric pressure outside the can causes it to collapse inwards. 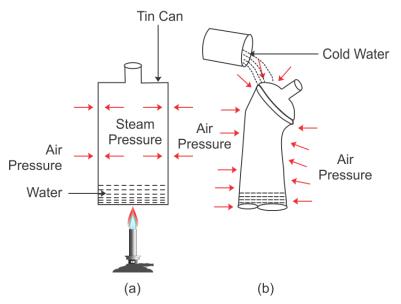 (i)When air is removed from the balloon, the pressure inside the balloon (which was due to air in it) is much less than the atmospheric pressure outside and hence the balloon collapses.

(iii) There is no air inside a completely filled and sealed can. When a single hole is made to drain out the oil from the can, some of the oil will come out and due to that the volume of air above the oil will increase and hence the pressure of air will decrease. But if two holes are made on the top cover of the can, air outside the can will enter it through one hole and exert atmospheric pressure on the oil from inside along with the pressure due to oil column, and it will come out of the can from the other hole.

A barometer is used to measure atmospheric pressure.

A barometer is an instrument which is used to measure the atmospheric pressure.

Construction of a simple barometer:

A simple mercury barometer can be made with a clear, dry, thick-walled glass tube about 1 metre ling. The glass tube is sealed at one end and is filled with mercury completely. While filling the tube with mercury care has to be taken so that there are no air bubbles present in the mercury column. Close the open end with thumb and turn the tube upside down carefully over a trough containing mercury. Dip the open end under the mercury level in the trough and remove the thumb. 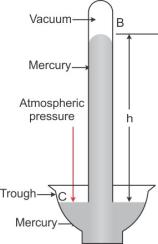 The vertical of the mercury column in it (i.e., AB = h) is called the barometric height.

Had the pressure at points A and C be not equal, the level of mercury in the tube would not have been stationary. 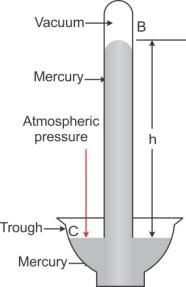 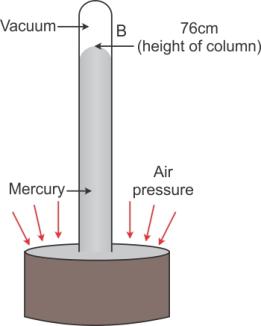 The space above mercury is a vacuum. This empty space is called 'Torricellian vacuum'.

(a) The barometric height remains unaffected.

(b) The barometric height remains unaffected.

(a) To measure the atmospheric pressure.

(b) For weather forecasting

(i) The density of mercury is greater than that of all the liquids, so only 0.76m height of mercury column is needed to balance the normal atmospheric pressure.

(ii) The mercury neither wets nor sticks to the glass tube therefore it gives the correct reading.

Water is not a suitable barometric liquid because:

(i) The vapour pressure of water is high, so its vapours in the vacuum space will make the reading inaccurate.

(ii) Water sticks with the glass tube and wets it, so the reading becomes inaccurate. 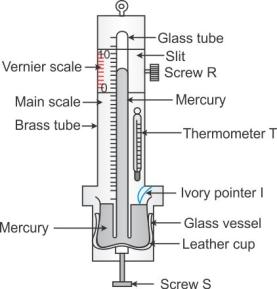 To measure the atmospheric pressure, first the leather cup is raised up or lowered down with the help of the screw S so that the ivory pointer I just touches the mercury level in the glass vessel. The position of the mercury level in the barometer tube is noted with the help of main scale and the vernier scale. The sum of the vernier scale reading to the main scale reading gives the barometric height.

A barometer calibrated to read directly the atmospheric pressure is called an aneroid barometer. It has no liquid, it is light and portable. 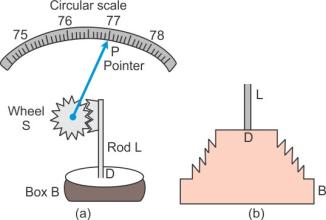 Construction: Figure above shows the main parts of an aneroid barometer. It consists of a metallic box B which is partially evacuated. The top D of the box is springy and corrugated in form of a diaphragm as shown. At the middle of diaphragm, there is a thin rod L toothed at its upper end. The teeth of rod fit well into the teeth of a wheel S attached with a pointer P which can slide over a circular scale. The circular scale is initially calibrated with a standard barometer so as to read the atmospheric pressure directly in terms of the barometric height.

Working: When atmospheric pressure increases, it presses the diaphragm D and the rod L gets depressed. The wheel S rotates clockwise and pointer P moves to the right on the circular scale. When atmospheric pressure decreases, the diaphragm D bulges out due to which the rod L moves up and the wheel S rotates anti-clockwise. Consequently, the pointer moves to the left.

Aneroid barometer has no liquid and it is portable. It is calibrated to read directly the atmospheric pressure.

(i) In a mine, reading of a barometer increases.

The atmospheric pressure decreases with an increase in the altitude. 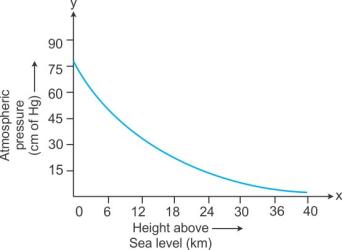 Factors that affect the atmospheric pressure are:

(i) Height of air column

An altimeter is a device used in aircraft to measure its altitude.

The scale of altimeter is graduated with height increasing towards left because the atmospheric pressure decreases with increase of height above the sea level.

(a) It indicates that the moisture is increasing i.e., there is a possibility of rain.

(b) It indicates the coming of a storm or cyclone.

(c) It indicates that the moisture is decreasing i.e., it indicates dry weather. 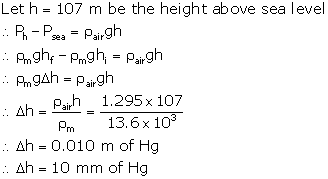