Gas is a state of matter in which interparticle attraction is weak and interparticle space is so large that the particles become completely free to move randomly in the entire available space.

The phenomenon is diffusion. In air, gas molecules diffuse to mix thoroughly. Hence, we can smell hydrogen sulphide gas from a distance in the laboratory.

Diffusion is the process of gradual mixing of two substances, kept in contact, by molecular motion.

If a jar of chlorine is opened in a large room, the odorous gas mixes with air and spreads to every part of the room. Although chlorine is heavier than air, it does not remain at the floor level but spreads throughout the room.

Temperature affects the kinetic energy of molecules. So, molecular motion is directly proportional to temperature.

Temperature remaining constant, the product of the volume and pressure of the given mass of a dry gas is constant

According to Boyle's Law, where K is the constant of proportionality.

If V' and P' are some other volume and pressure of the gas at the same temperature, then 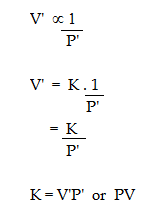 : Variation in volume (V) plotted against (1/P) at a constant temperature: A straight line passing through the origin is obtained.

2. V vs P: Variation in volume (V) plotted against pressure (P) at a constant temperature: A hyperbolic curve in the first quadrant is obtained.

3. PV vs P: Variation in PV plotted against pressure (P) at a constant temperature: A straight line parallel to the X-axis is obtained.

According to Boyle's law, on increasing pressure, volume decreases. The gas becomes denser. Thus, at constant temperature, the density of a gas is directly proportional to the pressure.

At higher altitude, atmospheric pressure is low so air is less dense. As a result, lesser oxygen is available for breathing. This is the reason mountaineers carry oxygen cylinders.

Boyle's law on the basis of the kinetic theory of matter:

At constant pressure, the volume of a given mass of a dry gas increases or decreases by 1/273rd of its original volume at 0°C for each degree centigrade rise or fall in temperature.

For Temperature = Conversion from Celsius to Kelvin

T vs V: The relationship between the volume and the temperature of a gas can be plotted on a graph. A straight line is obtained.

Significance of Charles's Law: The volume of a given mass of a gas is directly proportional to its temperature; hence, the density decreases with temperature. This is the reason that

(a) Hot air is filled in balloons used for meteorological purposes. (b) Cable wires contract in winters and expand in summers.

Charles's law on the basis of the kinetic theory of matter:

According to the kinetic theory of matter, the average kinetic energy of gas molecules is directly proportional to the absolute temperature. Thus, when the temperature of a gas is increased, the molecules would move faster and the molecules will strike the unit area of the walls of the container more frequently and vigorously. If the pressure is kept constant, the volume increases proportionately. Hence, at constant pressure, the volume of a given mass of a gas is directly proportional to the temperature (Charles's law).

Absolute or Kelvin scale of temperature

The temperature scale with its zero at -273°C and each degree equal to one degree on the Celsius scale is called Kelvin or the absolute scale of temperature.

The value on the Celsius scale can be converted to the Kelvin scale by adding 273 to it.

The Kelvin scale can be converted to the degree Celsius scale by subtracting 273 So, the boiling point of water on the centigrade scale is 373 K - 273 = 100°C.

Value: The standard values chosen are 0°C or 273 K for temperature and 1 atmospheric unit (atm) or 760 mm of mercury for pressure.

The standard values chosen are 0°C or 273 K for temperature and 1 atmospheric unit (atm) or 760 mm of mercury for pressure.

Temperature on the Kelvin scale (K)

= 273 + temperature on the Celsius scale

Standard pressure is taken as 1 atmosphere (atm) or 760 mmHg. 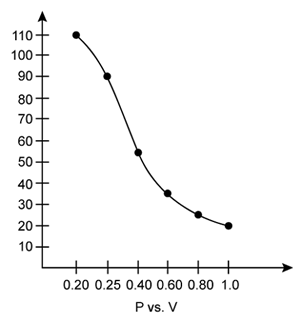 At constant temperature, P is inversely proportional to V. Thus, the plot of V versus P will be a rectangular hyperbola. 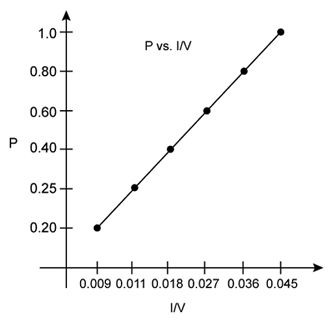 According to Boyle's law, at constant temperature, pressure of a fixed amount of gas varies inversely to its volume. The graph of pressure verses 1/V shows a positive slope. 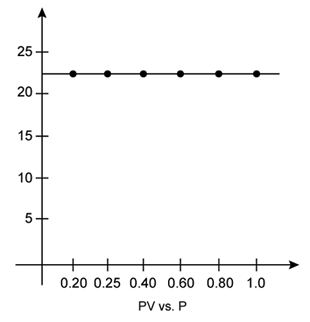 According to Boyle's law, the product of pressure and volume is constant at constant temperature. The graph of PV versus P is constant which indicates that the given gas obeys Boyle's law. 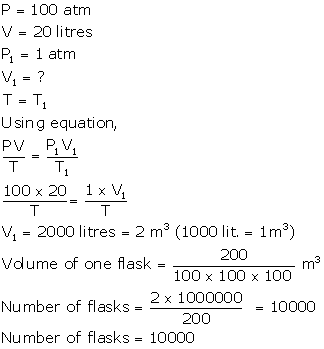 As the temperature is constant, 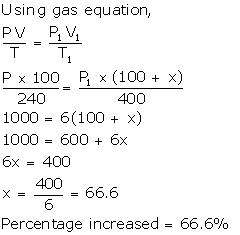 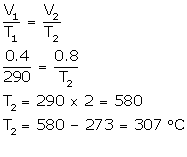 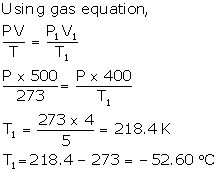 T1 = to be calculated 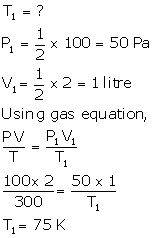 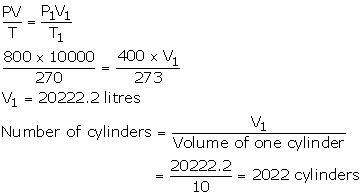 Pressure due to dry air,