An α-particle is a doubly charged helium ion (He2+) containing two protons and two neutrons. It is formed by removing two electrons from the helium atom.

Cathode rays are the beam of electrons which travel from the negatively charged end (i.e. cathode to anode) of a vacuum tube, across a voltage difference between the electrodes placed at each end.

These rays are called cathode rays and they travel from the cathode towards the anode. 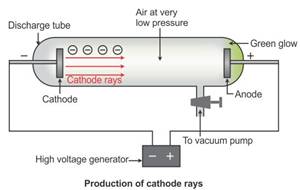 When a beam of cathode rays is made to fall upon hard metallic targets like tungsten, X-rays are produced.

When perforated rays were used in the discharge tube, another set of rays travelling in a direction opposite to that of the cathode rays, i.e. from the anode towards the cathode, is seen, as in the figure below. These rays are called canal rays because they passed through the holes or canals in the cathode. These rays were named positive rays or anode rays. 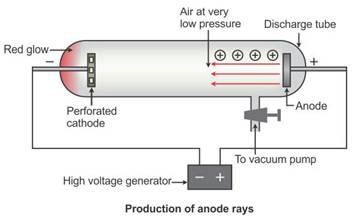 Discovery of the neutron also showed that an atom is divisible.

a. Hydrogen does not contain any neutron.

According to Thomson's atomic model, an atom is made of positively charged substances in the form of a sphere. Electrons are embedded into this sphere, and the total positive charge of the sphere is equal to the total negative charge of electrons, and hence, the atom remained electrically neutral. This model was not accepted because it was unable to explain how positively charged particles were shielded from negatively charged particles without getting neutralised.

According to Rutherford's model of an atom, the subatomic particle in a nucleus is a proton.

The nucleus was discovered by Rutherford.

Rutherford performed an experiment by allowing a stream of alpha particles to pass through a very thin gold foil. He observed that alpha particles pass through the metal foil without deviating from their path. This shows that an atom contains a large empty space called nuclear space.

One major drawback of Rutherford's model was the comparison of electrons with the planets in the solar system.

Thus, when an electron moved around the nucleus continually, it should radiate energy, i.e. lose energy. As a result it should be gradually pulled towards the nucleus and end up colliding with it. This should result in the total collapse of the atom.

However, we know that the atom is structurally stable. Thus, Rutherford's model could not explain this stability.

B is for L shell or II shell.

C is for M shell or III shell.

Shell K has the minimum amount of energy.

b) X is a nucleus; it is positively charged.

c)  The above sketch is of Bohr model of an atom.

Rutherford used gold for his scattering experiment because gold is the most malleable metal and he wanted the thinnest layer as possible.

The gold sheet used was around 1000 atoms thick.

Atomic number = Number of protons or number of electrons = 4

Atomic number (11) of sodium conveys information that the number of protons and electrons is the same.

Mass number (23) of sodium indicates the sum of protons and neutrons. 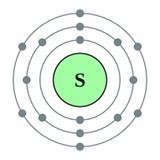 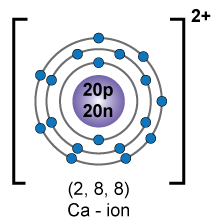 The latest research on the atom has proved that most of the postulates of Dalton's atomic theory contradict. However, Dalton was right that atoms take part in chemical reactions.

The three isotopes differ only due to their mass number which is respectively 1, 2 and 3 and named protium, deuterium and tritium. 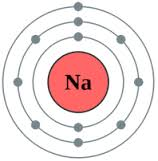 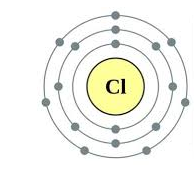 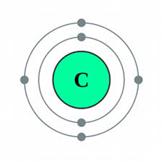 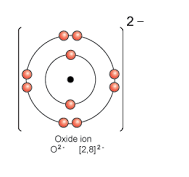 The number of protons in the nucleus of an atom determines the element type of the atom.

Number of electrons in the M shell = 2

Nucleons: Particles which constitute the nucleus are called nucleons.

Protons and neutrons are the nucleons. 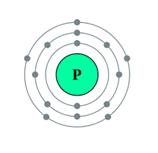 Isotopes: Atoms of the same element having the same atomic number but different mass numbers.

Isotopes differ with reference to neutrons.

Only electrons take part in chemical reactions. Chemical properties depend on the electronic configuration. Isotopes of the element Cl

have the same atomic number, and hence, the same configuration. So, they have the same chemical properties. These differ only in physical contents and weights because neutrons contribute to the mass of an atom.

have different number of neutrons 18 and 20, respectively.

a. Atomic number of an element is the number of protons in the nucleus of an atom.

Valency of B = Zero

Elements tend to combine with one another to attain the stable electronic configuration of the nearest inert gas.

The chemical bond formed due to the electrostatic force of attraction between a cation and an anion is called an electrovalent bond.

Metals have a tendency to lose their valence electrons (1, 2 or 3). So, they combine with non-metals which have 7, 6 or 5 electrons in their valence shell to form an electrovalent bond.

Electrovalent compounds are usually formed between metals and non-metals. 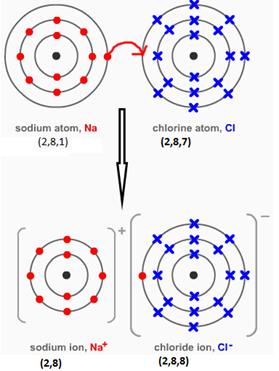 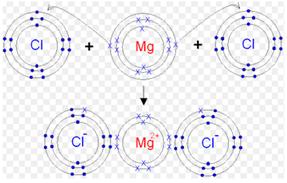 In chloride ion, there are 17 protons but 18 electrons.

Fluoride ion is a negatively charged ion with 9 protons and 10 electrons.

Neon atom is electrically neutral with 10 protons and 10 electrons.

i. Oxidation: In the electronic concept, oxidation is a process in which an atom or ion loses electron(s).

ii. Reduction: In the electronic concept, reduction is a process in which an atom or ion accepts electron(s).

An oxidising agent oxidises other substances either by accepting electrons or by providing oxygen or an electronegative ion, or by removing hydrogen or an electropositive ion.

A single covalent bond is formed by sharing of one pair of electrons between atoms, each atom contributing one electron.

A double bond is formed by sharing of two pairs of electrons between two atoms.

A triple bond is formed by sharing of three pairs of electrons between two atoms.

Element A with 1 electron in its first shell is hydrogen, and element B with 7 electrons in its third shell is chlorine.

So, a single covalent bond is formed between hydrogen and chlorine by sharing one pair of electrons.

Potassium chloride is an electrovalent compound and conducts electricity in the molten or aqueous state because the electrostatic forces of attraction weaken in the fused state or in aqueous solution.

Polar covalent compounds like hydrogen chloride ionise in their solutions and can act as an electrolyte. So, both can conduct electricity in their aqueous solutions.

Formula of compound when combined with sulphur - MS

Formula of compound when combined with chlorine - MCl2 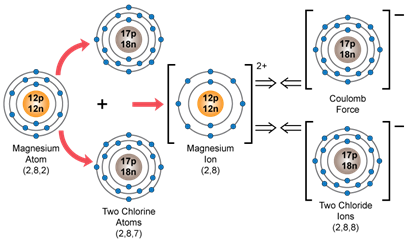 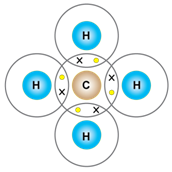 The bond formed between metal and nonmetal is ionic bond.

Bond formed between metal M and chlorine is ionic bond.

(i) B. They are formed between metals and non-metals.

(ii) A. It loses electrons and is oxidised.

Element X has 2 electrons in its M shell.

The electronic configuration would be 2, 8, 2.

Element Y has 7 electrons in its third orbit.

The electronic configuration would be 2, 8, 7. 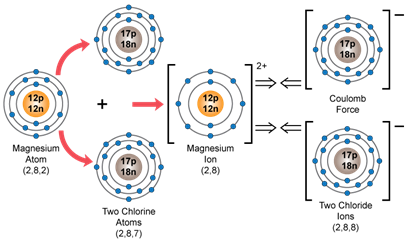 In the formation of