1. (c) in which glucose is broken down into pyruvate

2. (b) Stomata and lenticels

Respiration is an essential life process for all living organisms. Therefore, plants also respire all day and all night.

(a) False. Aerobic respiration of one mole of glucose yields 38 ATP.

(d) False. All leaves of a green plant normally respire aerobically at night.

The energy liberated in respiration is stored in the form of ATP inside the cells. Some part of it is lost as heat to the surroundings.

Respiration is said to be the reverse of photosynthesis due to the following reasons:

(2) In respiration, CO2 is given out, while in photosynthesis CO2 is consumed.

(3) In respiration, O2 is consumed, while in photosynthesis O2 is released or evolved.

(4) In respiration, energy is liberated, while in photosynthesis energy is absorbed.

Tilling makes the soil porous and airy. The underground parts of the plants get sufficient amount of oxygen for respiration. In this way, tilling helps the crops to grow faster.

C because the enzymes involved in respiration become inactivated at high temperatures.

Similarities between respiration and burning:

(i) Both require oxygen

(iii) Both result in the formation of CO2 and water

Differences between respiration and burning:

Difference between aerobic and anaerobic respiration in plants:

(1) Take two thermos flasks 'A' and 'B'. (2) Take about 200 bean or pea seeds and soak them in water for more than 24 hours. (3) Divide the seeds into two equal groups. Kill one group of seeds by boiling them and then, wash them with dilute formalin to prevent bacterial decay. Place the live germinating seeds in flask A and the killed one in flask B. (4) Insert a thermometer in each of the flasks and plug their mouths with cotton wool. Note the initial reading in the thermometer. (5) After few hours, the thermometer in flask A will show a higher reading indicating that the germinating seeds produce heat. There will not be any rise in the temperature of flask B. 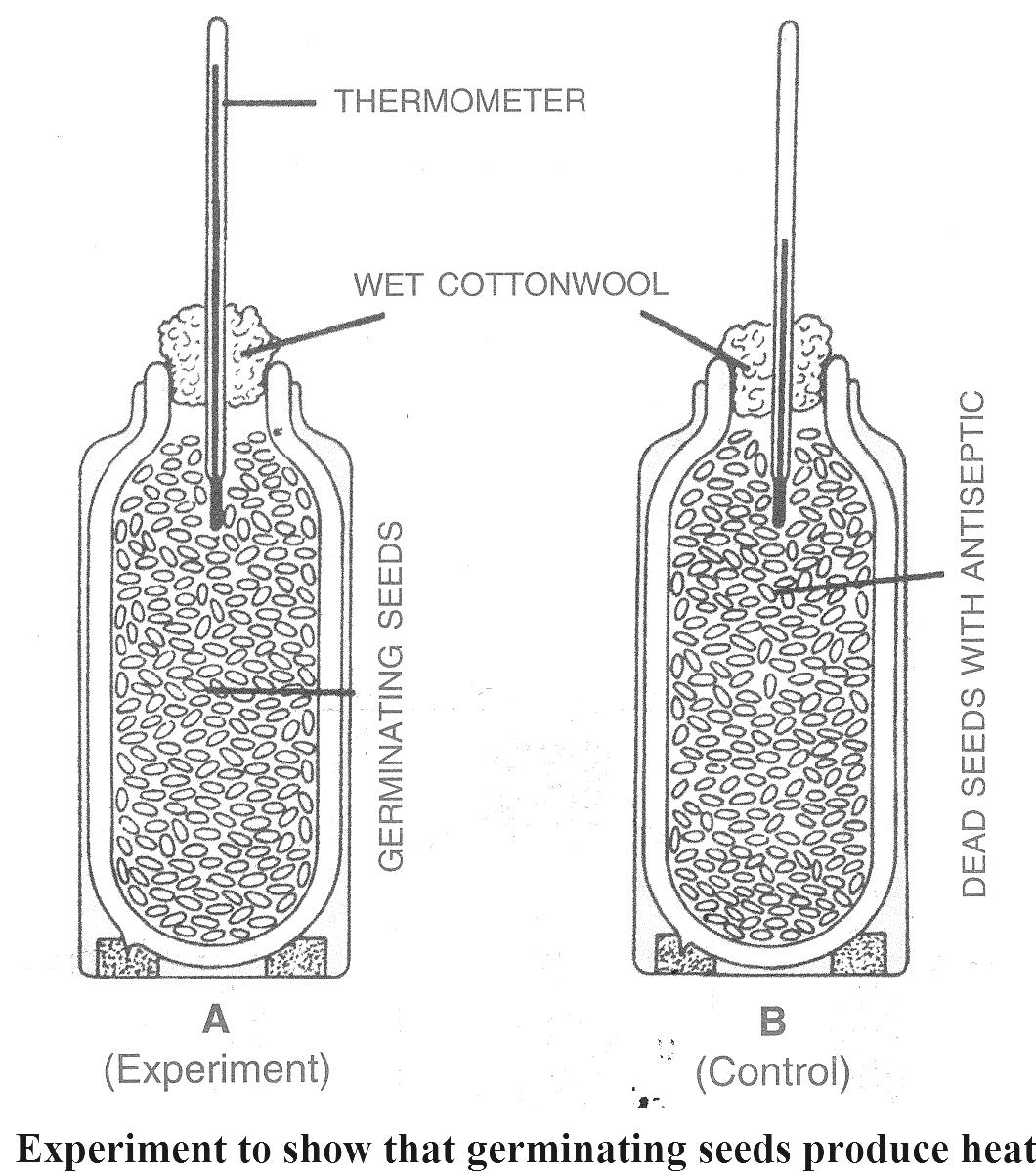 (b) Experiment demonstrating that germinating seeds give out carbon dioxide.

(1) Take two flasks 'A' and' B'. (2) Place some wet cotton wool at the bottom of both the flasks. (3) Place some soaked seeds of pea in flask A and an equal number of boiled or dead seeds in flask B. Add some carbolic acid to flask B to prevent the growth of bacteria on dead seeds. (4) Cork the flasks and keep them undisturbed for few days. (5) After few days, the seeds in flask A will have germinated and the seeds in flask B do not show any signs of germination. (6) The gases in each of the flasks are then tested by removing the cork and tilting the flask over a test tube containing limewater and then shaking up the test tube. (7) The expected CO2 present in flask A will turn limewater milky showing that germinating seeds give out CO2, while the gas in flask B will show no effect on limewater. 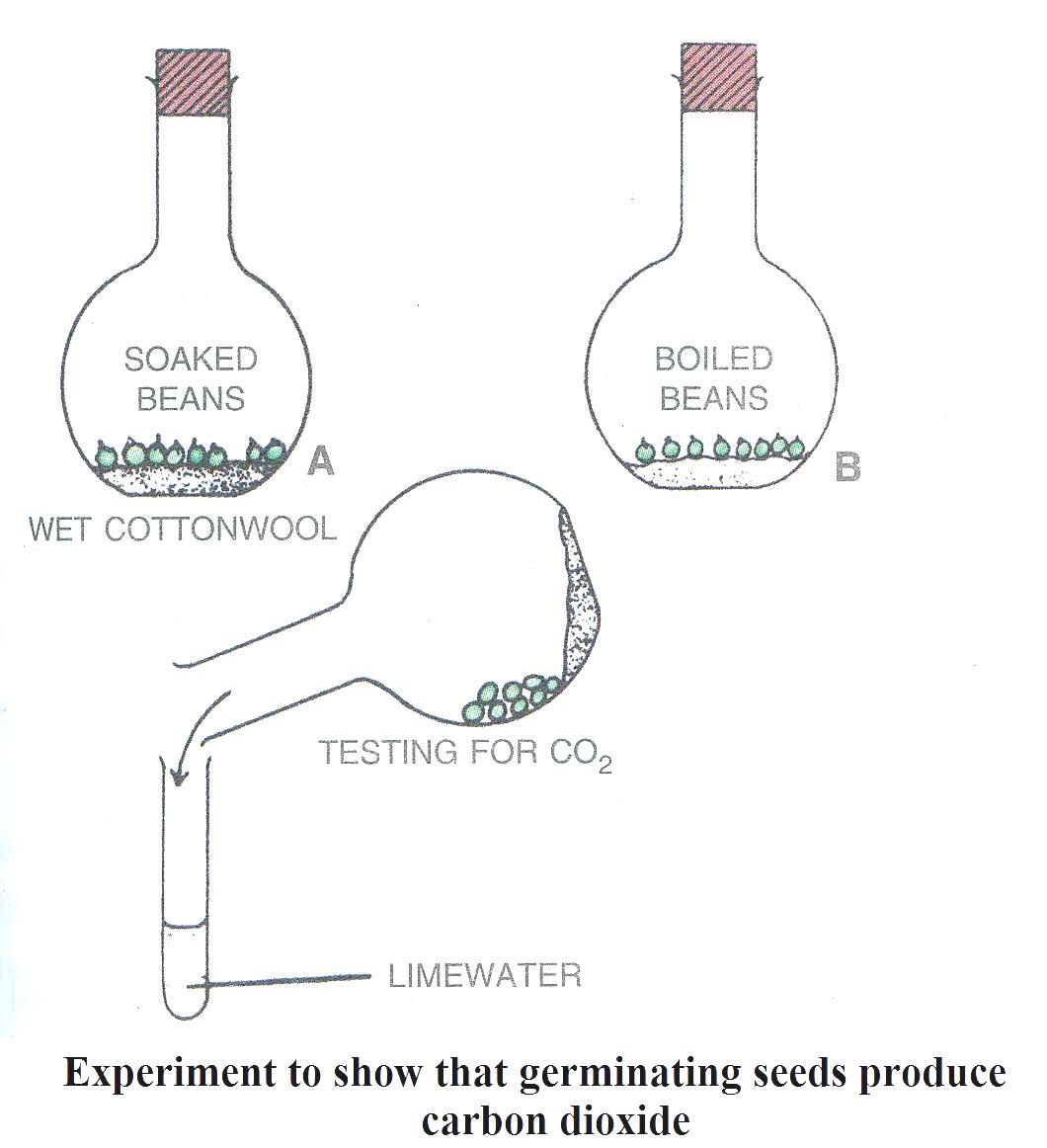 (c) Experiment demonstrating that germinating seeds can respire even in total absence of air.

(1) Take few soaked and peeled off pea seeds and push them into the mouth of a test tube filled with mercury and inverted in a beaker of mercury. The seeds will float to the top and will be completely surrounded by mercury. (2) After few days, the level of mercury falls and the presence of some gas in the test tube can be detected. (3) Add some KOH to the test tube. The gas present in the test tube will be absorbed and the level of mercury will again rise showing that the gas was CO2. Hence, we can prove that germinating seeds respire even in the total absence of air. 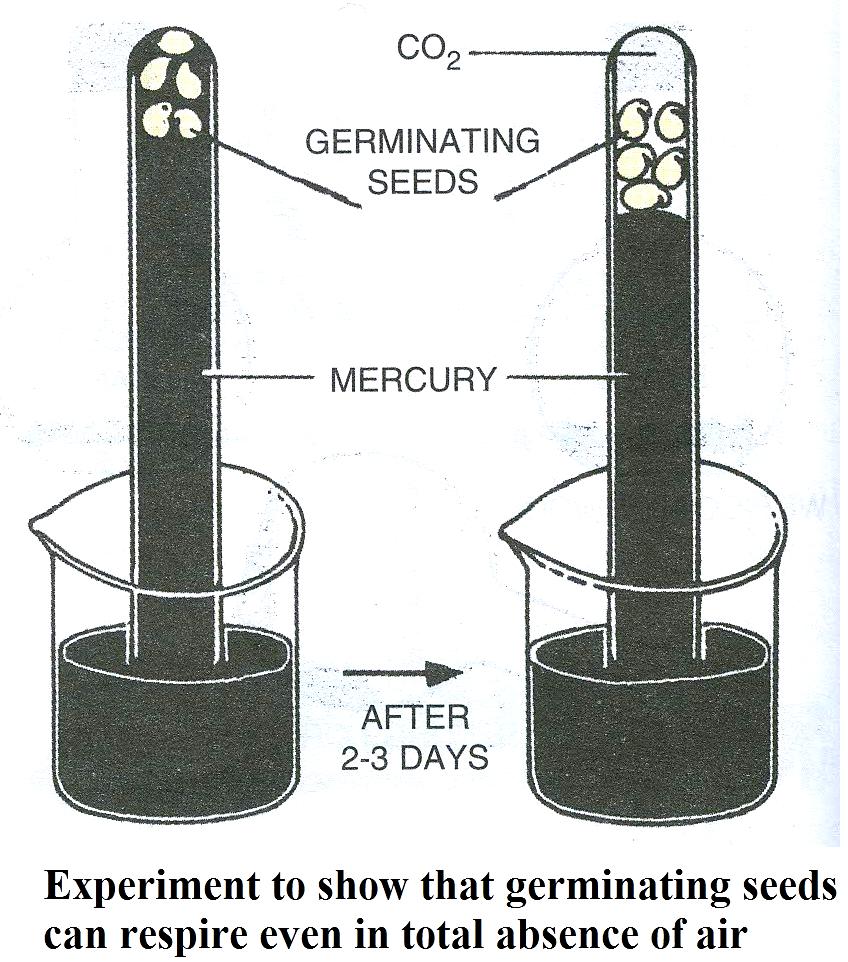 (a) Lenticels help the stem to participate in respiration.

(b) Stomata help the leaves to participate in respiration.

(c) Root hairs help the roots to participate in respiration.

(a) Potassium hydroxide solution is kept in test tube X and Y to check the presence of CO2, as KOH can absorb CO2, if it is produced.

(c) In test tube Y, boiled peas soaked in disinfectant are kept because the boiled seeds are dead and cannot respire. Therefore, the process of respiration does not take place in test tube Y.

(d) Respiration is the cause of the above rise.

(e) The catabolic process of releasing energy from simple sugars for carrying out life processes is called respiration.

(a) Five flasks (A-E) are having different plant parts for observation.

(b) Limewater absorbs CO2 present in the flasks. If CO2 is produced, limewater turns milky.

(d) Set-up F acts as a control for the experiment, where all the conditions are similar except for the plant part, which is missing.

(e) It can be concluded from this experiment that CO2 is produced during respiration.

(a) The experiment was set up to study that CO2 is given off from living plant material which performs respiration.

The limewater present in bottle 'B' shows that no CO2 is entering bottle C with the air passing through bottle C.

(c) The bottle 'D' having limewater will show that CO2 is produced due to respiration taking place in bottle 'C' having germinating seeds in it. Due to the CO2 produced in bottle C, the limewater turns milky, which passes through bottle 'D'.

(e) The bottle 'C' when covered with black cloth will have no scope for photosynthesis. Hence, only the process of respiration can be observed.