Covalent bonding is present in ammonia.

Formula of liquid ammonia is: NH3.

Liquid ammonia is liquefied ammonia and is basic in nature. It dissolves in water to give ammonium hydroxide which ionizes to give hydroxyl ions.

(a) Lab preparation of ammonia:

(b) The ammonia gas is dried by passing through a drying tower containing lumps of quicklime (CaO).

(d) Ammonia is highly soluble in water and therefore it cannot be collected over water. 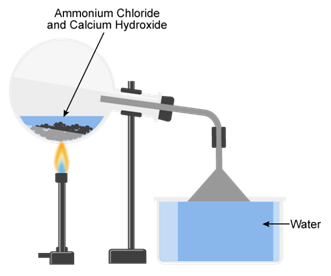 (b)The drying agent used is CaO in case of ammonia.

Other drying agents like P2O5 and CaCl2 are not used. As ammonia being basic reacts with them.

The substance A is Ammonium chloride and 'B' is Ammonia.

(a) Conditions for reactants to combine :

Traces of molybdenum or Al2O3 as promoters.

(b) Dry nitrogen and dry hydrogen in the ratio of 1:3 by volume is made to combine.

Source of Nitrogen: It is obtained from fractional distillation of liquid air.

(e)Two possible ways by which NH3 produced is removed from unreacted N2 and H2 by:

(ii)Absorbing in water: As ammonia is highly soluble in water.

(ii)Molybdenum acts as a promoter to increase the efficiency of the catalyst.

(h) The unchanged nitrogen and hydrogen are recirculated through the plant to get more ammonia. By recirculating in this way, an eventual yield of 98% can be achieved.

(a) Ammonium compounds being highly soluble in water do not occur as minerals.

(b) Ammonium nitrate is not used in the preparation of ammonia as it is explosive in nature and it decomposes forming nitrous oxide and water vapours.

(c) Conc. H2SO4 is not used to dry ammonia, as ammonia being basic reacts with them.

(d)  (i) In order to better mixing of ammonium chloride, calcium hydroxide used in excess.

(ii) The flask is fitted in slatting position because of the water formed in the reaction does not trickle back into the heated flask.

An element has 2 electrons in its N shell = Ca (calcium)

The compound formed is calcium nitride (Ca3N2) which reacts with warm water and produces the basic gas ammonia (NH3).

(a) The formula of the compound is Mg3N2.

(c) Ammonia is a reducing agent and reduces less active metal oxide to its respective metal.

a. A reddish brown precipitate is obtained when ammonium hydroxide is added to ferrous chloride.

b. Aqueous ammonia is a solution of NH3.

d. Quicklime (CaO) is a drying agent for NH3.

(a)Ammonia is less dense than air. By Fountain Experiment, we demonstrate the high solubility of ammonia gas in water.

(b) The high solubility of ammonia gas in water

(c)The balanced equation for the reaction between ammonia and sulphuric acid is:

(a) Ammonia is basic in nature.

(b) Copper oxide because CuO is less reactive can be reduced by C, CO or by hydrogen whereas Al2O3, Na2O, MgO are reduced by electrolysis.

(b) Ammonia is used for removing grease and dirt as it emulsifies or dissolves them.

(c) Ammonia is formed by bacterial decomposition of urea, so ammonia has a pungent smell.

It is used in the industrial preparation of nitric acid by Ostwald process.

It is used in the manufacture sodium carbonate by Solvay process.

Ammonia solution in water gives a blue precipitate when it combines with a solution of copper salt.

This reaction is reversible and exothermic. From the reaction, it is proved that ammonia contains nitrogen and hydrogen.

Ammonia burns with a yellowish flame. It produces water vapour and nitrogen. This shows that ammonia contains nitrogen and hydrogen.

(i) Ammonia act as reducing agent is explained by equation (c).

(ii) Urea the nitrogenous fertilizer is prepared from equation (d).

(a) Dirty green ppt. of Ferrous hydroxide is formed which is insoluble in excess of NH4OH.

(b) Reddish brown ppt. of ferric hydroxide is formed which is insoluble in ammonium hydroxide.

(c) White ppt. of lead hydroxide is formed which is insoluble in NH4OH.

(d)White gelatinous ppt. of Zinc hydroxide is formed which is soluble in NH4OH.

Calcium chloride does not react with ammonium hydroxide.

When ammonium hydroxide is added drop wise to solution to be tested.

When ammonium hydroxide is added drop wise to solution to be tested.

Zinc nitrate gives white gelatinous ppt. of their hydroxides which is soluble on adding excess of ammonium hydroxide.

Whereas, lead nitrate gives white ppt. of their hydroxides which is insoluble on adding excess of ammonium hydroxide.

(b) Hydrogen chloride and chlorine gas.

The cation present in solution B is Copper (Cu+2).

The colour of solution B is Blue.

Three ways in which ammonia gas can be identified is:

It has a sharp characteristic odour

As the 'A' turns red litmus blue it is a base.Now the gas 'A' combines with 'B' in presence of Catalyst to give colourless gas Nitrogen monoxide. It reacts with oxygen to give brown gas which is Nitrogen dioxide.

The free radical [Cl] reacts with ozone and chlorine monoxide is formed.

(b) Liquid ammonia can be used as a refrigerant, as an alternative for chlorofluorocarbons.

(c) Advantages of ammonia as refrigerant:

(i) Ammonia is environmentally compatible. It does not deplete ozone layer and does not contribute towards global warming.

(ii) It has superior thermodynamic qualities as a result ammonia refrigeration systems use less electricity.

Ammonia has a recognizable odour and so leaks are not likely to escape.

Both are examples of Thermal dissociation.

(a)It is the basic nature of ammonia molecule.

(c) The red litmus paper turns blue in the solution.

b. Ammonia burns with a yellowish flame. It produces water vapour and nitrogen.

ii. 1 part of nitrogen gas and 3 parts of hydrogen gas

i. Ammonia and hydrogen chloride gas

a. In small quantity: A bluish white ppt. is obtained.

In excess quantity: A deep blue solution is obtained.

iii. By downward displacement of air

v. Bring a moist red litmus paper to the mouth of  the inverted jar if it immediately turns blue.

Bring a glass rod dipped in hydrochloric acid to the mouth of the inverted jar. If it produces dense white fumes, then the jar is full of gas.

b. Magnesium nitride reacts with boiling water to liberate ammonia.

i. Ammonium nitrate is a highly explosive substance and cannot be heated.

iii. By the downward displacement of air or upward delivery as it is lighter than air.

It is not collected over water because it easily dissolves in water.

a. A yellow-coloured explosive is formed.

i. When added in small quantity, it forms a gelatinous white ppt.

ii. When added in excess, it dissolves to form a complex salt.

a. Downward displacement of air.

i. Hydroxyl (OH-) ion other than ammonium ion

f. In the presence of platinum catalyst at 800°C.