b. The balanced equation for the reaction:

e. Hydrogen chloride gas is highly soluble in water. Therefore, it is not collected over water.

f. The funnel arrangement is done to dissolve HCl gas in water.

(a) Anhydrous HCl is poor conductor due to the absence of ions in it whereas aqueous HCl is excellent conductor since it contains ions.

(b) When the stopper is opened HCl gas comes in contact with water vapors of air and gives white fumes due to the formation of hydrochloric acid.

(c) A solution of HCl in water gives hydronium ions and conducts electricity, but HCl is also soluble in dry toluene, but in that case it neither (i) turns blue litmus red (ii) nor does conducts electricity. This indicates the absence of H+ ions in toluene showing thereby that hydrogen chloride is a covalent compound.

(d) When ammonium hydroxide is brought near the mouth of HCl, dense white fumes are formed due to the formation of ammonium chloride.

(f) Hydrogen chloride is not collected over water as it is highly soluble in water.

(a) Hydrochloric acid is prepared by this method.

(b) The reactants are sodium chloride and Sulphuric acid.

(c) The empty flask acts as Anti-Suction device. In case the back suction occurs the water will collect in it and will not reach the generating flask.

Prevents or minimizes back suction of water.

Provides a large surface area for absorption of HCl gas.

i. The experiment is the fountain experiment and is used to demonstrate solubility.

ii. The colour of the water that has entered the round-bottomed flask is red.

When hydrogen chloride is collected by downward delivery or upward displacement, it shows that it is heavier than air.

a. Hydrogen reacts with chlorine to form hydrogen chloride.

b. Dilute hydrochloric acid cannot be concentrated by boiling beyond 22.2% because molecules of HCl(g) get mixed with water vapour.

We can prove that hydrochloric acid contains both hydrogen and chlorine by the following experiment.

Take a voltameter used for electrolysis of water, fitted with platinum cathode and graphite anode.

Into the voltameter pour 4 molar HCl and pass direct current.

When a burning splinter is brought near a colourless gas, it bursts into flame thereby proving that it is hydrogen gas.

When moist starch iodide paper is held in the greenish yellow gas, it turns blue black, thereby proving that the gas is chlorine.

This experiment proves that hydrochloric acid contains both hydrogen and chlorine.

(b) Hydrogen chloride and ammonia

A is Silver nitrate

B is Hydrochloric acid

a. Sodium carbonate on treating with dil.HCl results in the formation of sodium chloride with the liberation of carbon dioxide gas.

Sodium sulphite on treating with dil.HCl results in the formation of sodium chloride with the liberation of sulphur dioxide gas.

Sulphur is not precipitated when sulphites are treated with dil.HCl.

HCl gas gives thick white fumes of ammonium chloride when glass rod dipped in ammonia solution is held near the vapours of the acid.

A greenish yellow gas is liberated when concentrated hydrochloric acid is heated with oxidizing agent like manganese dioxide.

MnO2, PbO2 and red lead react with conc. HCl acid to liberate Cl2. This shows that hydrochloric acid is oxidized to chlorine by oxidizing agents.

When hydrogen chloride gas is dissolved in water, hydrochloric acid is formed. The covalent compound ionises in water because of its polar nature and it can conduct electricity.

Hydrogen chloride gas is soluble in toluene, but there is an absence of H3O+ in toluene, so it does not ionise the gas; thus, it cannot conduct electricity.

A mixture having three parts of conc. hydrochloric acid and one part of conc. nitric acid gives nascent chlorine.

A mixture having three parts of conc. Hydrochloric acid and one part of conc. Nitric acid is called aqua-regia.

Equations for the reactions of hydrochloric acid on

a. Aqua regia is a mixture of Concentrated hydrochloric acid [3 parts] and concentrated nitric acid [1 part].

a. Hydrogen chloride gas being highly soluble in water is dried by conc. sulphuric acid.

i. Sodium thiosulphate is reacted with dilute  hydrochloric acid:

i. Diagram to show the arrangement used for the absorption of HCl gas in water: 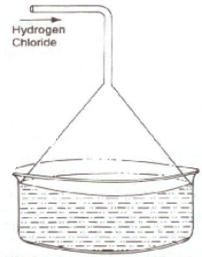 ii. Such an arrangement is necessary to prevent back suction of water into the apparatus and it provides a large surface area for dissolution of hydrogen chloride gas.

b. Because HCl undergoes a chemical reaction with quicklime.

d. Balanced equations with conditions for the following conversions:

a. i. When potassium sulphite is treated with dilute hydrochloric acid, sulphur dioxide gas is evolved.

ii. When concentrated hydrochloric acid is made to react with manganese dioxide, chlorine gas is evolved.

b. i. Hydrogen sulphide gas is evolved which has the smell of rotten eggs.

ii. A white precipitate of silver chloride is formed which is soluble in ammonium hydroxide.

a. Quicklime is not used to dry HCl gas because CaO is alkaline.

b. Action of dilute hydrochloric acid on sodium sulphide:

Sodium carbonate crystals on reaction with dilute HCl form sodium chloride, water and carbon dioxide gas, which is evolved with brisk effervescence. This is a neutralisation reaction because sodium carbonate is a basic salt, while hydrochloric acid is an acid. The chemical equation for this reaction is as follows:

i. The gas is HCl (hydrogen chloride) gas.

ii. The extreme solubility of hydrogen chloride gas is demonstrated by the fountain experiment.

iii. Another gas which has the same property and can be demonstrated through this experiment is ammonia gas.

(ii) For purification of HCl, it is dried by passing through conc. Sulphuric acid. It is preferred over the other drying agent because it does not react with HCl

(iii) i. Temperature should be maintained at nearly 200oC.

iii. The lower end of the thistle funnel must be dipped in conc. Sulphuric acid.

HCl is highly soluble in water.

HCl is highly soluble in water. Its high solubility may be demonstrated by the fountain experiment.

The gas released has a rotten egg smell.