Oxidation: In the electronic concept, oxidation is a process in which an atom or ion loses electron(s).

Reduction: In the electronic concept, the reduction is a process in which an atom or ion accepts electron(s).

(a) A chemical bond may be defined as the force of attraction between any two atoms, in a molecule, to maintain stability.

(c) The chemical bond formed due to mutual sharing of electrons between the given pairs of atoms of non-metallic elements is called as a covalent bond.

Conditions for formation of Ionic bond are:

(ii) A high difference of electronegativity of the two atoms is necessary for the formation of an Ionic bond.

(iii) There must be an overall decrease in energy i.e., energy must be released.

(iv) Higher the lattice energy, greater will be the case of forming an ionic compound.

Atoms combine with other atoms to attain stable octet or noble gas configuration.

X and Y form an ionic bond in XY2.

(b) The formula of the compound would be XY.

i. Orbit structure and electron dot diagram of NaCl: 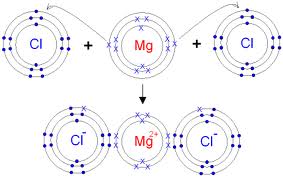 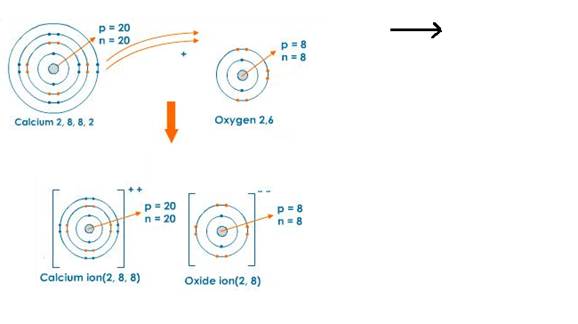 (a) Sodium atom and sodium ion

(i) Sodium atom has one electron in M shell while sodium ion has 8 electrons in L shell.

(iii) Sodium atom is highly reactive while its ion is inert.

iv) Sodium atom is poisonous while sodium ion is non-poisonous.

(iii) Chlorine atom is highly reactive while its ion is inert.

iv) Chlorine gas is poisonous while chloride ion is non-poisonous.

Fluoride ion is negatively charged while neon atom is neutral.

i. Oxidation: In the electronic concept, oxidation is a process in which an atom or ion loses electron(s).

ii. Reduction: In the electronic concept, the reduction is a process in which an atom or ion accepts electron(s).

An oxidising agent oxidises other substances either by accepting electrons or by providing oxygen or an electronegative ion, or by removing hydrogen or an electropositive ion.

(b) X will be a strong reducing agent as it will have the tendency to donate its valence electron.

The crystalline solid is ionic in nature. It has strong electrostatic forces of attraction between its ions, which cannot be separated easily.

Crystalline solids have high melting and boiling points, and a large amount of energy is required to break the strong bonding force between ions.

Water is a polar compound, so it decreases the electrostatic forces of attraction in the crystalline solid, resulting in free ions in the aqueous solution. Hence, the solid dissolves.

Methane is a covalent compound and is non-polar in nature. This is because the shared pair of electrons is equally distributed between the two atoms. So, no charge separation takes place and the molecule is symmetrical and electrically neutral.

(i) Both atoms should have four or more electrons in their outermost shells, i.e., non-metals.

(ii) Both the atoms should have high electronegativity.

(iii) Both the atoms should have high electron affinity and high ionisation potential.

(iv) Electronegativity difference between the two atoms should be zero or negligible.

(v) The approach of the atoms towards one another should be accompanied by decrease of energy.

(a) A is a non-metal; B is a metal while C is a chemically inert element.

A polar covalent compound is the one in which there is an unequal distribution of electrons between the two atoms.

(b) Ionic compounds, made up of ions, are generally crystalline solids with high melting and boiling points.

They are soluble in water and good conductors of electricity in aqueous solution and molten state.

Covalent compounds, made up of molecules, can exist as soft solids or liquids or gases with low melting and boiling points. They are generally insoluble in water and poor conductors of electricity.

(c) Polar covalent compounds are formed between 2 non-metal atoms that have different electronegativities and therefore have unequal sharing of the bonded electron pair.

Non-polar compounds are formed when two identical non-metals equally share electrons between them.

Covalent compounds are said to be polar when shared pair of electrons are unequally distributed between the two atoms. For example in HCl, the high electronegativity of the chlorine atom attracts the shared electron pair towards itself. As a result, it develops a slight negative charge and hydrogen atom develops a slight positive charge. Hence, a polar covalent bond is formed.

One atom of carbon shares four electron pairs, one with each of the four atoms of hydrogen.

b. Methane is a covalent compound and is non-polar in nature. This is because the shared pair of electrons is equally distributed between the two atoms. So, no charge separation takes place and the molecule is symmetrical and electrically neutral.

(a) Properties of Electrovalent Compounds:

1. Ionic compounds usually exist in the form of crystalline solids.

3. Ionic compounds are generally soluble in water but insoluble in organic solvents.

4. They are good conductors of electricity in the fused or in an aqueous solution state.

(b) Properties of Covalent Compounds:

1.The covalent compounds exist as gases or liquids or soft solids.

2. The melting and boiling points of covalent compounds are generally low.

3. Covalent compounds are insoluble in water but dissolve in organic solvents.

4. They are non-conductors of electricity in the solid, molten or aqueous state.

a. Electrovalent compounds are good conductors of electricity in the fused or aqueous state because electrostatic forces of attraction between ions in the solid state are very strong and these forces weaken in the fused state or in the solution state. Hence, ions become mobile.

b. Electrovalent compounds have a strong force of attraction between the oppositely charged ions, so a large amount of energy is required to break the strong bonding force between ions. So, they have high boiling and melting points.

Covalent compounds have weak forces of attraction between the binding molecules, thus less energy is required to break the force of binding. So, they have low boiling and melting points.

c. As water is a polar compound, it decreases the electrostatic forces of attraction, resulting in free ions in the aqueous solution. Hence, electrovalent compounds dissolve.

d. Electrovalent compounds are usually hard crystals yet brittle because they have strong electrostatic forces of attraction between their ions which cannot be separated easily.

e. Polar covalent compounds conduct electricity because they form ions in their solutions.

Potassium chloride is an electrovalent compound and conducts electricity in the molten or aqueous state because the electrostatic forces of attraction weaken in the fused state or in aqueous solution.

Polar covalent compounds like hydrogen chloride ionise in their solutions and can act as an electrolyte. So, both can conduct electricity in their aqueous solutions.

(c) If the compound formed between A and B is melted and an electric current is passed through the molten compound, then element A will be obtained at the cathode and B at the anode of the electrolytic cell.

The bond formed between two atoms by sharing a pair of electrons, provided entirely by one of the combining atoms but shared by both is called a coordinate bond. It is represented by an arrow starting from the donor atoms and ending in the acceptor atom.

1. One of the two atoms must have at least one lone pair of electrons.

2. Another atom should be short of at least a lone pair of electrons.

The two lone pair of electrons in the oxygen atom of water is used to form coordinate bond with the hydrogen ion which is short of an electron resulting in the formation of the hydronium ion.

H3O+ Over here the hydrogen ion accepts one lone pair of electrons of the oxygen atom of water molecule leading to the formation of a coordinate covalent bond.

A pair of electrons which is shared between two atoms resulting in the formation of a covalent bond is called a shared pair.

c. O and H are bonded with a single covalent bond and oxygen possesses a single negative charge in the hydroxyl ion.

(i) Ammoniumion and hydronium ion

Cl - will accept one electron, so two Cl atoms will share an electron pair.

H - will donate one electron by sharing an electron pair with carbon.

(c) Ionic or electrovalent compounds do not conduct electricity in their solid state.

i. Y is getting reduced.

ii. Y is positive and it will migrate towards negative electrode that is cathode.

c. It is a non-polar covalent compound and does not dissolve in polar solvents like water.

Magnesium oxidises and chlorine reduces during the formation of magnesium chloride.

A single covalent bond is present.

a. Dative or coordinate bond

b. B Ammonium chloride

c. C Are insoluble in water

d. Their constituent particles are molecules. These exist as gases or liquids or soft solids because they have weak forces of attraction between their molecules.

(i) Ionic bond is formed by transfer of one electron from element W to element X.

(ii) Covalent bond is formed by sharing of electrons between elements Y and Z.

b. No, in the formation of an ionic compound, one element is a metal and the other is a non-metal.