(b) evaporation of water from the aerial surfaces of a plant

(b) protection and reduced transpiration

(i) False. Most transpiration occurs at mid-day.

(a) Transpiration increases with the velocity of wind. If the wind blows faster, the water vapour released during transpiration is removed faster and the area surrounding the transpiring leaf does not get saturated with water vapour.

(c) Plants absorb water continuously through their roots, which is then conducted upwards to all the aerial parts of the plant, including the leaves. Only a small quantity of this water i.e. about 0.02% is used for the photosynthesis and other activities. The rest of the water is transpired as water vapour. Hence water transpired is the water absorbed.

(e) The stomata in most plants are more numerous on the lower surface of a leaf as compared to the upper surface because lower surface does not face direct sunlight. This arrangement helps to reduce the rate of transpiration.

(i) False. Most transpiration occurs at mid-day.

(iv) False. Potometer is an instrument used for measuring the rate of transpiration in green plants.

(a) Transpiration: Transpiration is the loss of water in the form of water vapour from the aerial parts (leaves and stem) of the plant.

(b) Exudation: The process by which plants lose water or other fluids along with dissolved substances directly in liquid form and not as water vapour is called exudation.

(c) Potometer: Potometer is a device that measures the rate of water intake by a plant and this water intake is almost equal to the water lost through transpiration.

(d) Wilting: The collapsing of leaves due to excessive loss of water i.e. transpiration or due to some disease is called wilting.

(e) Hydathodes: Special pore-bearing structures present on the margins of the leaf to allow exudation are called hydathodes.

(f) Cuticle: Cuticle is a waxy layer secreted by the epidermis on the two surfaces of the leaf which prevents evaporation of water from the leaf surfaces.

(a) Differences between stomata and lenticels:

(b) Differences between guttation and bleeding:

(c) Differences between transpiration and evaporation:

Take the small potted rose plant and cover it with a transparent polythene bag. Tie its mouth around the base of the stem. Leave the plant in sunlight for an hour or two. 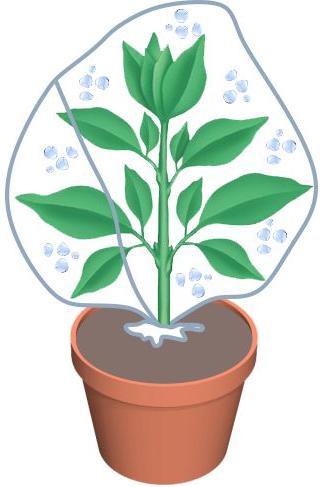 Drops of water will soon appear on the inner side of the bag due to the saturation of water vapour given out by the leaves. A similar empty polythene bag with its mouth tied and kept in sunlight will show no drops of water. This is the control to show that plants transpire water in the form of water. If tested with dry cobalt chloride paper, the drops will be confirmed as water only.

Stomatal transpiration is controlled by the plant by altering the size of the stoma, where as this does not happen in case of lenticular transpiration. This is because the lenticels never close, but remain open all the time.

No, they are not dew drops.

This is water given out by the plant body through guttation. Since the banana plant is growing in humid environment, transpiration is hampered. But the roots continue to absorb water from the soil. This builds up a huge hydrostatic pressure within the plant and forces out the excess water from the hydathodes, which are pores present at the tips of veins in the leaf. This is observed especially during the mornings.

(b) Humidity of the atmosphere - When the air is humid; it can receive very less water vapour. Thus, high humidity in the air reduces the rate of outward diffusion of the internal water vapour across stomata, thereby reducing the rate of transpiration.

(i) Leaf D: i.e. the leaf with no greasing on either surfaces would dry first because it would lose water from both surfaces i.e. it would lose maximum quantity of water.

(ii) Leaf A: which was coated with grease on both the surfaces would dry last because greasing prevents evaporation of water and transpiration occurs through stomata which are present more on the lower surface of the leaf.

(b) The experimental leaf is a dicot leaf as it shows reticulate venation and there are more number of stomatal openings on the undersurface of a dicot leaf. Hence, transpiration is more and can be easily observed.

(c) Glass slides are placed over the dry cobalt chloride papers so as to retain the strips in their position.

(a) CaCl2 is a hygroscopic compound that absorbs moisture/water without changing its state. CaCl2 vials inside the cup to absorb water.

(b) Yes, after few hours the weight of the CaCl2 vials will increase because they will absorb water lost by the leaf of the plant due to transpiration.

(d) Transpiration is the loss of water in the form of water vapour from the aerial parts (leaves and stem) of the plant.

(a) A is transpiration. Transpiration is the evaporative loss of water from the aerial parts (leaves and stem) of the plants.

(b) Significance of transpiration for the plants:

• Distribution of water and minerals 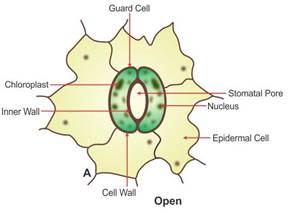 (b) Transpiration is a process during which water is lost in the form of water vapour through aerial parts of the plant.

(c) The pot is covered with a plastic sheet to prevent evaporation of water from the soil.

(d) A control for this experiment will be an empty polythene bag with its mouth tied.

(e) Transpiration is beneficial to plants in the following ways:

(f) Adaptations in plants to reduce transpiration are

(b) Transpiration is a process by which water is lost in the form of water vapour from aerial parts of the plant.

Weight of test tube B remains the same before and after the experiment, because no loss of water occurs in test tube B.

(d) Test tube B is used here as a control. This makes the observation of the change in test tube A easy.