(b) Contains both sensory and motor fibres

(b) Maintaining posture and equilibrium

(a) Corpus Callosum - It is located located in the forebrain. It connects two cerebral hemispheres and transfers information from one hemisphere to other.

(b) Central canal - It is located in centre of the spinal cord. It is in continuation with the cavities of the brain. It is filled with cerebrospinal fluid and acts as shock proof cushion. In addition, it also helps in exchange of materials with neurons.

(a) Association neuron: It acts as a connecting neuron and interconnects the sensory and motor neurons.

(b) Myelin sheath: It acts like an insulation and prevents mixing of impulses in the adjacent axons.

(c) Medullary sheath: It provides insulation and prevents mixing of impulses in the adjacent axons.

(d) Cerebrospinal fluid: It acts like a cushion and protects the brain from shocks.

(a) Three types of neurons:

(b) Three types of nerves:

(e) Three layers of the meninges:

(a) Neuron: Neurons are the fundamental units of the nervous system specialized to transmit information in the form of electrical impulses to different parts of the body.

(b) Nerve: Nerve is a bundle of nerve fibres (axons) of separate neurons, enclosed in a tubular sheath.

(c) Stimulus: An agent or the sudden change of the external or internal environment that results in a change in an organism or any of its body parts is called a stimulus.

(d) Synaptic cleft: The gaps between the axon terminals and the dendrites of another one or more neurons are called synaptic clefts.

(e) Reflex action: Reflex action is an automatic or quick or immediate involuntary action in the body brought about by a stimulus.

(a) Differences between cerebrum and cerebellum (function):

(d) Differences between cerebrum and spinal cord (arrangement of cytons and axons of neurons):

(f) Differences between nerve impulse and flow of electricity (transmission and speed):

(a) The brain and the spinal cord lie in the skull and the vertebral column respectively. They have an important role to play because all bodily activities are controlled by them. A stimulus from any part of the body is always carried to the brain or spinal cord for the correct response. A response to a stimulus is also generated in the central nervous system. Therefore, the brain and the spinal cord are called the central nervous system.

(b) Neurotransmitters are broken down by an enzyme just after passing an impulse from one neuron to the other to make the synapse ready for the next transmission of impulse.

The advantages of having a nervous system are as follows:

(a) Keeps us informed about the outside world through sense organs.

(b) Enables us to remember, think and reason out.

(c) Controls and harmonizes all voluntary muscular activities such as running, holding, writing

(d) Regulates involuntary activities such as breathing, beating of the heart without our thinking about them. 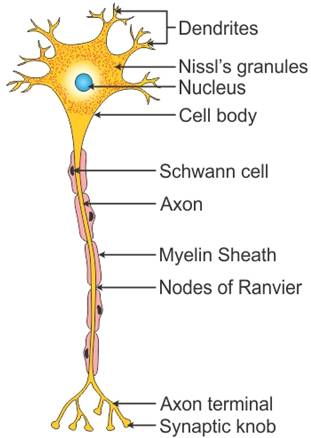 Salivation is an example of conditioned reflex that develops due to experience or learning. Saliva starts pouring when you chew or eat food. Therefore, this reflex will occur not just on the sight or smell of food. The brain actually needs to remember the taste of food. Boy B started salivating because he must have tasted that food prior unlike boy A.

(b) Meninges. The three layers of meninges are dura mater, arachnoid and pia mater.