(a) Circulatory system: The circulatory system is responsible for transport of various substances in human beings and is composed of the heart, arteries, veins and blood capillaries.

(b) Blood: Blood is the circulating fluid contained in the heart and in the blood vessels such as arteries, veins and capillaries of the circulatory system.

(c) Heart: Heart is the muscular pumping organ which pushes the blood around the body and has different chambers such as right atrium, left atrium, right ventricle, left ventricle to prevent the mixing of oxygenated blood and carbon dioxide rich blood.

(d) Diapedesis: Diapedesis is the squeezing of leucocytes through the wall of capillaries into the tissues.

(e) Phagocytosis: Phagocytosis is the process in which most WBCs and particularly the neutrophils engulf particle-like solid substances, especially bacteria.

(f) Rh factor: Rh factor is an inherited antigen often found on the blood cells. Some individuals have these antigens and are thus Rh positive (Rh+) while others who do not have this antigen are Rh negative (Rh-)

(a) Differences between systole and diastole:

(b) Differences between arteriole and venule:

(d) Differences between arteries and veins:

(e) Differences between haemoglobin and chlorophyll:

(c) The mechanism of blood clotting involves the presence of calcium and other clotting factors. Thrombokinase activates an enzyme called prothrombin activator. The enzyme prothrombin activator then converts plasma protein prothrombin into thrombin. Thrombin is the enzyme which in turn converts fibrinogen into fibrin. Polymerized fibrin together with platelets forms a clot at the wound site. The prothrombin is a plasma protein synthesized in the liver. Vitamin K is essential for the synthesis of prothrombin. Hence, Vitamin K is essential for the process of blood clotting.

(a) Tonsils: Tonsils are lymph glands located on the sides of the neck. They tend to localize the infection and prevent it from spreading it in the body as a whole.

(b) Spleen: The spleen is a large lymphatic organ. The spleen acts as a blood reservoir in case of emergency such as haemorrhage, stress or poisoning. It produces lymphocytes and destroys worn out RBCs.

(c) Hepatic portal vein: The hepatic portal vein is a blood vessel that carries blood from the gastrointestinal tract, gallbladder, pancreas and spleen to the liver. This blood contains nutrients and toxins extracted from digested contents.

(d) Basophils: They are a type of granular WBCs which release chemicals called histamine for inflammation which dilate blood vessels.

(e) S.A.N.: The sinoatrial node is a group of cells located in the wall of the right atrium of the heart. The action potential required for the rhythmic contractile activity of the heart is generated at the SA node. When the impulse is initiated, it results in the atrial systole.

Double circulation is a process during which blood passes twice through the heart during one complete cycle. The flow of blood in the heart consists of two phases-

Difference between pulmonary and systemic circulation:

(a) lymphocytes and monocytes

(a) closure of tricuspid and bicuspid valves

(b) rushing of blood through valves producing turbulence

(a) Blood platelets and blood coagulation

(b) Neutrophils and phagocytosis

(c) Erythrocytes and transportation of gases

(e) Bone marrow and destruction of old and weak RBC's/production of RBCs and WBCs.

(a) The blood vessel that begins and ends in capillaries is the hepatic portal vein.

(b) A blood vessel which has small lumen and thick wall is artery.

(c) The valve which prevents the back flow of blood in the veins and lymph vessels is semilunar valve.

(d) An anticoagulant present in the blood is heparin.

A matured mammalian erythrocyte lacks a nucleus and mitochondria. The lack of a nucleus increases the surface area-volume ratio of RBCs, thus increasing the area for oxygen absorption. Also, the lack of a nucleus reduces the size of the cell, making it easy to flow through the blood vessels and more cells can be accommodated in a small area.

The lack of mitochondria implies that the cell does not use any oxygen absorbed for respiration, thus increasing the efficiency of the cell to transport oxygen as all the oxygen absorbed is transported without any loss.

(a) Differences between antibodies and antibiotics based on their source:

(b) Differences between serum and vaccine based on their composition:

(c) Differences between erythrocytes and leucocytes based on their function:

The functions of blood plasma are:

(a) Transports of digested food from the alimentary canal to tissues.

(b) Transports excretory materials from tissues to excretory organs.

(c) Distributes hormones from the glands to their target site.

Blood clotting or coagulation occurs in a series of the following steps:

(a) The injured tissue cells and the platelets disintegrate at the site of wound to release thromboplastin.

(b) The thromboplastin with the help of calcium ions converts inactive prothrombin into active thrombin.

(c) Thrombin in the presence of calcium ions converts soluble fibrinogen into insoluble fibrin which forms a mesh or network at the site of wound.

(d) The blood cells trapped in this network shrink and squeeze out the plasma to leave behind a solid mass known as the clot. 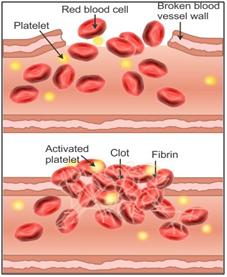 The functions of the blood are:

(a) Transport of digested food from the alimentary canal to tissues. These substances are simple sugars like glucose, amino acids, vitamins, mineral salts, etc.

(b) Transport of oxygen in the form of an unstable compound 'oxyhaemoglobin' from the lungs to the tissues.

(c) Transport of carbon dioxide from the tissues to the lungs.

(d) Transport of excretory materials from the tissues to the liver, kidney or the skin for elimination.

(e) Distribution of hormones from glands to the target sites.

(f) Distribution of heat to keep the body temperature uniform.

Blood flows twice in the heart before it completes one full cycle. This process of blood circulation in the human body is called double circulation.

The expansion or relaxation phase of the atria is called a diastole.

Function of part 2 (WBC): WBCs play major role in defense mechanism and immunity of the body.

Function of part 3 (Blood Platelet): Blood platelets are the initiator of blood clotting.

(a) The structure 3 represents the heart. It forms the centre of double circulation and is located between the liver and the head (as per the diagram). Also the blood circulation (indicated by 1) begins from heart to lungs.

(d) The lymph supplies nutrition and oxygen to those parts where blood cannot reach. The lymph drains away excess tissue fluids and metabolites and returns proteins to the blood from tissue spaces.

(b) 1 - External layer made of connective tissue

(e) At the capillary level the actual exchange of gases takes place.

(a) Atrial Diastole and Ventricular Systole

(b) Ventricular muscles are contracting during this phase because the valves between the two ventricles and pulmonary artery and aorta are open while the atrio-ventricular valves are closed.

(e) Two i.e., bicuspid and tricuspid valves are closed in this phase.

d. The process which occurs in B and C is phagocytosis. In this process, the WBCs engulf the foreign particles and destroy them, thus preventing the occurrence of disease.

b. Such an arrangement can be observed in the lungs.