(b) DNA and Histones

(c) both ovary and testis

(d) - Phosphate, Sugar and Nitrogenous base.

(a) DNA replicates in the synthesis (S) phase of the cell cycle.

(b) Mitosis occurs in our somatic (body) cells.

(d) Modern humans have 46 chromosomes. Their sperms and eggs will have 23 chromosomes each.

(e) During the pairing of chromosomes in meiosis, the homologous chromosomes come to lie side by side.

(f) The two non-sister chromatids of a paired chromosome are attached to each other at chaisma during the process of crossing over.

Rungs of DNA ladder is made of nitrogenous bases which includes Adenine (A), Guanine (G), Cytosine (C) and Thymine (T).

(a) The four nitrogenous bases in the DNA ladder are Guanine, Thymine, Adenine and Cytosine.

(b) Genes are specific sequences of nucleotides on a chromosome.

(c) A nucleotide is composed of a phosphate, sugar (pentose) and a nitrogenous base.

(e) If there are 46 chromosomes in a cell there will be 46 chromatin fibres inside the nucleus during interphase.

(a) False (F); Surface skin cells are continuously lost and replaced by the underlying cells.

(b) False (F); Nuclear membrane disappears in Prophase itself, however it reappears during Telophase.

(c) True (T); Mitotic cell division can be a mode of asexual reproduction in unicellular organisms like amoeba or yeast cell which divides into two daughter cells.

(d) True (T); While the maternal and paternal chromosomes are separating, the chromatid material gets exchanged between the two members of a homologous pair resulting in genetic recombination.

(a) Chromosome: Chromosomes are highly condensed coiled chromatin fibres made of DNA which carry the hereditary material of the organisms.

(b) Gene: Genes are specific sequences of nucleotides on a chromosome that encode particular proteins which express in the form of some particular feature of the body.

(c) Cell division: Cell division is the method in which the cell divides and the duplicated chromosomes get evenly distributed into the daughter cells.

(d) Chromatid: Duplicated chromosomes consist of two identical strands, each of these is called a chromatid.

(e) Aster: Each centriole is surrounded by radiating rays and is termed aster.

(c) The mixing up or recombination of genes during meiotic division provides for the innumerable variations and diversity in the progeny. That is how, the children of the same parents, howsoever similar, are different from each other in certain aspects.

(a) Differences between cytokinesis and karyokinesis:

(b) Differences between DNA and RNA:

(c) Differences between nucleosome and nucleotide:

(d) Differences between centrosome and centromere:

(e) Differences between haploid and diploid:

Changes which occur in the nucleus of the cell during mitosis:

• The nuclear membrane and the nucleolus disappear.

• The duplicated chromosomes begin to move towards the equator of the cell.

• The two sister chromatids of each chromosome separate and are drawn apart towards the opposite poles.

Stages of the cell cycle:

In interphase, cells grow in size and volume and prepare for the next cell division.

It is divided into three phases:

• First growth phase (G1): RNA and proteins are synthesised, and the volume of the cytoplasm increases.

• Synthesis phase (S): DNA is synthesised and chromosomes are duplicated.

It consists of the following phases:

• Karyokinesis: It is the division of the nucleus during cell division.

• Cytokinesis: It is the division of the cytoplasm during cell division.

It occurs in four phases:

• Metaphase: Chromosomes are arranged on the metaphase plate or equatorial plane.

• Anaphase: The centromere divides, and the sister chromatids separate from each other. Spindle fibres contract and pull chromatids towards opposite poles.

• The furrow continues to deepen in the cell, and it finally divides the cytoplasm forming two new daughter cells.

• In plant cells, a cell plate appears at the equatorial plane.

c. The division is mitotic division and this kind of cell division occurs in all the cells of the body except for the reproductive cells.

d. The stage before anaphase is metaphase. 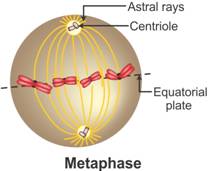 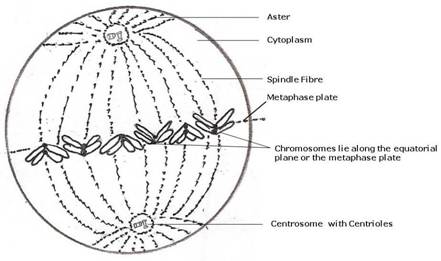 The exchange of chromatids between homologous chromosomes is called crossing-over. This is the process by which the two chromosomes of a homologous pair exchange equal segments with each other.

Since the chromosomes are homologous, breaks at corresponding points mean that the segments that are broken off contain corresponding genes, i.e., alleles. The broken sections are then exchanged between the chromosomes to form complete new units, and each new recombined chromosome of the pair can go to a different daughter sex cell. It results in recombination of genes found on the same chromosome, called linked genes that would otherwise always be transmitted together.

(a) Late prophase. Because the nuclear membrane and nucleolus have disappeared.

(d) Metaphase. The centromeres of chromosomes are drawn to the equator by equal pull of two chromosomal spindle fibres that connects each centromere to the opposite poles, forming a metaphasic plate.

(a) This is an animal cell because:

(i) The outline is circular (in plants it would be angular {rectangular or polygonal}) and cell wall is absent.

(ii) Centrosomes on centrioles are present. (These are found only in animal cells) 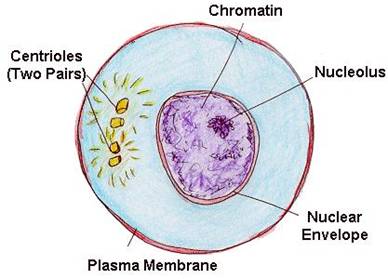 (a) It is a plant cell because centrioles are not shown in the diagram.

(c) Metaphase. Chromosomes arrange themselves on the metaphase or equatorial plate.

(d) Difference between mitosis and meiosis based on the chromosome number in daughter cells: 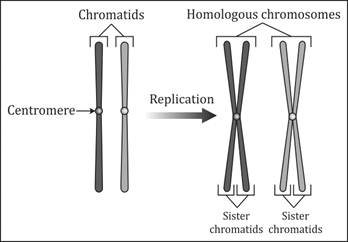