(d) Use of antibiotics and prophylactic vaccinations

(b) False. In tubectomy, fallopian tubes are cut or ligated i.e. tied with nylon thread to close the passage of the egg.

(f) False. Birth rate (natality) is the number of live births per 1000 people of population per year.

(g) False. Vasectomy is a popular surgical method of contraception in human males.

Two advantages of small family are:

(a) Parents can give more attention to their children.

(b) Small family helps every country in controlling the growth of population.

Family welfare centres are those places where any help or advice about family planning is available free of cost. These places could be any hospitals, dispensaries, etc. The inverted red triangle is the symbol of family welfare in India.

Yes, there could be a corresponding operation made in women. The name of the surgical procedure in females is 'tubectomy'. In tubectomy, the abdomen is opened and the fallopian tubes (oviducts) are cut or ligated i.e. tied with nylon thread to close the passage of the egg. 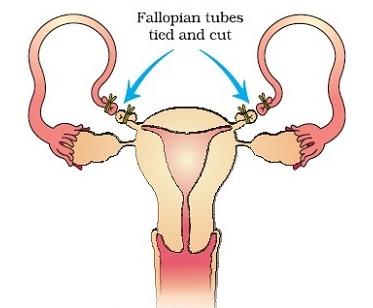 By law the minimum age is 21 years for boys and 18 years for girls.

Most of the rural population which forms the bulk of our society is still illiterate, ignorant and superstitious.

They also do not know the functioning of the human reproductive system.

Among the people from lower strata of the society, children are regarded as a gift of God and a sign of prosperity.

Therefore, they make no effort to avoid pregnancy.

Poverty and population have been closely linked ever since the world faced changes due to the major revolutions. Poverty has its own effects on the population and vice versa. Poverty prevails because of illiteracy and traditional beliefs in the economically weaker strata. Since illiteracy and traditional beliefs prevail the people from this stratum, they regard children as gift of God and a sign of prosperity. They consider children to be helping hands in increasing the family income, hence they keep producing more children forgetting that their current situation would do no good for the children and they would add more to this already overburdened poverty strata. Hence, the population keeps on rising and so does poverty. As the population increases the quality of life goes down.

(a) Population: The number of inhabitants living at a place together is called population.

(b) Population density: It is the number of individuals per square kilometre (km2) at any given time.

(c) Demography: It is the statistical study of human population specifically with reference to size and density, distribution and other vital statistics.

(d) Resources: Resource is any substance (natural or artificial), energy or organism which is used by humans for their welfare.

(c) Differences between natality and mortality:

(d) Differences between tubectomy and vasectomy:

(e) Differences between deforestation and afforestation:

The 3 Rs in the context of sustainable development are Reduce, Reuse and Recycle.

1. Reduce: Reduce the amount of Earth's resources which we use. Use of less paper and plastic carry bags.

2. Reuse: Reuse means not to throw old goods away, but to use the same goods again so that the demand for new goods is reduced. Plastic jars can be reused for storing salt, food grains etc.

3. Recycle: Recycle means rather than throwing materials away, they can be recycled. Used and discarded plastic, glass, paper and metal are sent to the respective industries where they can be converted into other useful products such as lampshades, handbags etc.

(i) Food: The first and most important need of the humans (or any living organism) is food. But with the production of food rising by arithmetic progression and population growing by geometric progression i.e. the number at each step is being multiplied. At the same time growing population is increasing the use of more and more agricultural land to build houses. Thus it is evident that food would be running short for the unchecked rising population.

(ii) Water: Availability of clean and germ-free water for drinking purposes would be more and more scarce with increase in population; the reason would be mainly, the pollution of rivers, ponds, lakes etc.

(i) The orthodox view, to have at least one son especially in Indian society, should be modified with education. People should be educated that their greed for a son can lead to numerous children in the household which would worsen both their family's health and wealth. They should focus on proper upbringing of the child, be it a son or a daughter.

(ii) Married couples should be educated to delay the birth of their first child, to space the second with a sufficient interval for proper upbringing and to stop the third. They should also be educated to adopt family planning methods by which they can prevent pregnancy after two children. These include devices for both men and women, for example: Condoms, intrauterine devices (IUD) and oral pills.

For developing countries like India, population explosion is a curse and is damaging the development of the country and its society. The developing countries are already facing a lack in their resources, and with the rapidly increasing population, the resources available per person are reduced further, leading to increased poverty, malnutrition, and other large population-related problems. The literal meaning of population is "the whole number of people or inhabitants in a country or region", and the literal meaning of population explosion is "a pyramiding of numbers of a biological population". As the number of people in a pyramid increases, so do the problems related to the increased population. Some of the reasons for this population explosion are poverty, better medical facilities, and immigration from the neighboring countries. The population in India continues to increase at an alarming rate. The effects of this population increase are evident in the increasing poverty, unemployment, air and water pollution, and shortage of food, health resources and educational resources.

(e) Part 2 (testes): They produce the sperm cells or sperms by the process of spermatogenesis.

Part 4 (uterus): It functions to nourish and house a fertilized egg until the fetus, or offspring, is ready to be delivered.