Understand concepts without stress by using Selina Solutions for ICSE Class 10 Biology Chapter 16 Pollution – A Rising Environmental Problem for revision. Relearn what are pollutants and why they are harmful to people and the environment. Also, learn about the constituents of sewage while practising with the textbook solutions.

To learn in detail about the different kinds of pollution and the initiatives to prevent pollution, refer to TopperLearning’s Selina concise solutions. Also, check our extensive ICSE Class 10 Biology revision notes, Frank textbook solutions and other study materials. These revision and exam preparation resources will help you not only to score more marks but also to become aware of environmental concerns.

Question A.1
Which one of the following is an example of pollutant?

(a) A rat entering your kitchen

(b) CO2 given out by the respiring organism

(c) The heat given out while cooking food

(a) Too loud marriage musical bands

(b) Disposing of corpses in rivers

(d) Wearing scented/perfumed clothes
Solution A.2
(b) Disposing of corpses in rivers
Question A.3

One of the examples of radiation pollutants is

Question B.1
Name the following pollutants:

(i) A pollutant which is mainly responsible for causing acid rain.

(ii) Any two chemicals leading to the formation of ozone holes.

(iii) The chemical element which caused minimata disease in Japan.

Solution B.2
Question B.3

Fill in the blanks:

Identify biodegradable waste from the following:

List two major harmful effects of each of the following:

(i)   Rivers contaminated with sewage.

(ii)  Too much gaseous exhausts containing CO2 and SO2.

(iii) Pesticides such as DDT used in agriculture.

(iv) Prolonged noise such as the one produced by crackers

(i) Rivers contaminated with sewage:

(a) A number of waterborne diseases are produced by the pathogens present in polluted water, affecting humans as well as animals.

(b) The flora and fauna of rivers, sea and oceans is adversely affected.

(ii) Too much gaseous exhausts containing CO2 and SO2:

(a) The high concentration of CO2 in atmosphere has been the main component of the green house effect that has caused global warming i.e. the rise of atmospheric temperature in recent years. Global warming causes melting of snow caps rise in sea levels.

(b) SO2 is poisonous and irritates the respiratory system of animals and humans. A continuous exposure to SO2 has been reported to damage the lungs and increase the rate of mortality.

(c) SO2 is also responsible for acid rain

(iii) Pesticides such as DDT used in agriculture:

(a) Pesticides kill soil microbes which are responsible to recycle the nutrients in the soil.

(b) Pesticides can enter the food chain and affect the health of humans as well as animals. It can cause damage to the lungs and central nervous system, failures of reproductive organs and dysfunctions of the immune system, endocrine system, and exocrine system, as well as potential cancer risks and birth defects.

(iv) Prolonged noise such as the one produced by crackers :

What are the common sources of oil spills, and how do they affect sea life.

The sea birds and sea animals sometimes get thick, greasy coating on their bodies due to oil spills.

(i) Use of loud speakers should be banned.

(ii) Airports should be located away from the residential area.
Question C.5

Briefly mention about 'Swachh Bharat Abhiyan'. When was it launched and what are its objectives?

'Swachh Bharat Abhiyan' is a significant cleanliness campaign started by the Government of India. It was officially launched on 2nd October 2014 by Indian Prime Minister Narendra Modi, who took the cleanliness pledge at India Gate in Delhi.

Question D.1
A lot of fish are dying near a sea shore. Describe any two possible causes.
Solution D.1
(i) Industrial Waste:

Large number of industries produces waste water which contains various types of chemical pollutants. Such wastes are commonly discharged into the rivers. These chemicals cause irritation to the body systems of fish.

Many industries such as thermal power plants, oil refineries, nuclear plants use water for cooling their machinery. This hot waste water may be 8-10oC warmer than the intake water. This hot water is released into the nearby streams, rivers or the sea and causes warming. The sudden fluctuation in the temperature of water kills the fishes and harms the plant life growing in it.
Question D.2
Look at the cartoonist's presentation of a kind of pollution given below and

(i) Name the kind of pollution.

(iii) Mention any two harmful effects of this pollution. 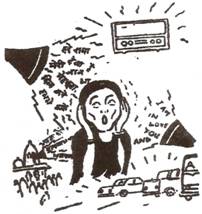 I. It lowers efficiency of work.

(i) Name the phenomenon and explain it.

(ii) Enlist the sources that are responsible for the above mentioned phenomenon.

(iii) List out the effects of the above phenomenon on humans.

(i) Ozone layer depletion is a phenomenon in which certain gaseous compounds such as chlorofluorocarbons (CFCs) break down into chlorine atoms which in turn break down ozone (O3) into oxygen (O2) and O.

The picture below shows a campaign recently started by the Indian Government. 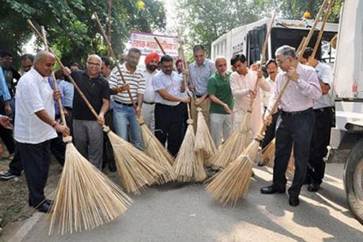 (i) Who launched this campaign and when?

(ii) Mention some chief objectives of this campaign.

(i) This campaign was launched on 2nd October 2014 by Indian Prime Minister Narendra Modi.