Chemistry is an important subject in ICSE Class 10, as the fundamentals studied now will also be helpful in the competitive exams like IIT-JEE and NEET. TopperLearning presents study materials for ICSE Class 10 Chemistry to help students to score well in the examination. All our study materials are created by subject experts and give basic insight on about how and what to prepare for the final exams.

(a) Choose the correct answer from the options given below:

(i)The element with the highest ionisation potential is

(iii) A compound with a low boiling point is

(iv) The acid which can produce carbon from cane sugar is

(v) The organic compound having a triple carbon–carboncovalent bond is

(b) State the relevant observationfor each of the following reactions:

(c) Write a balanced chemical equation for each of the following:

(i) Draw the structural formula for each of the following:

(ii) Write the IUPAC name for the following compounds:

(e) State one relevant reason for each of the following:

(g) Give one word or a phrase for the following statements:

(h) Fill in the blanks from the choices given in the brackets:

(a) The following table represents the elements and the atomic number.With reference to this,answer the following using only the alphabets given in the table.

(b) Draw the electron–dot diagram for the compounds given below.Represent the electrons by (.) and (x) in the diagram.

(c) Choose the correct word which refers to the process of electrolysis from A to E to match the description (i) to (iv):

A: Oxidation; B: Cathode; C:Anode; D: An electrolyte; E: Reduction

(a) Baeyer’s process is used to concentrate bauxite ore to alumina. Give balanced chemical equations for the reaction taking place for its conversion from bauxite to alumina.

(b) Complete the following by selecting the correct option from the choice given:

(a) Differentiate between the following pairs based on the information given in the brackets.

(b) Draw the structural isomers of pentane.

(c) Hydrogen chloride gas is prepared in the laboratory using concentrated sulphuric acid and sodium chloride. Answer the questions that follow based on this reaction:

(a) Distinguish between the following pairs of compounds using a reagent as a chemical test:

(b) Calculate the percentage of

(a) Identify the salts P, Q, R from the following observations:

(b) Identify the substance underlined in each of the following:

(c) Copy and complete the following paragraph using the options given in brackets:Alkenes are a homologous series of

(a) Write balanced chemical equations for the preparation of the given salts (i) to (iii) by using the methods A to C, respectively:

A: Neutralisation B: Precipitation C: Titration

(b) Name the following elements:

(i) An alkaline earth metal present in group 2 and period 3.

(c) An aqueous solution of nickel (II) sulphate was electrolysed using nickel electrodes. Observe the diagram and answer the questions that follow: 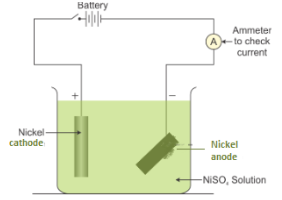 (i) What do you observe at the cathode and anode, respectively?

(ii) Name the cation that remains as a spectator ion in the solution.

(iii) Which equation for the reaction at the anode is correct?

(i) When concentrated nitric acid reacts with copper, reddish brown fumes of nitrogen dioxide are formed.

(ii) With excess of NH4OH, the precipitate formed of Cu(OH)2 dissolves to give a deep blue solution of tetrammine copper(II) sulphate.

(iii) A colourless, odourless gas is evolved which burns with a pop sound.(iv)When zinc carbonate is heated strongly, carbon dioxide is evolved.

(i) Graphite electrode being an inert electrode does not interfere in the process of electrolysis.

(iii) Copper sulphate crystals CuSO4.5H2O contain 5 water molecules which are known as water of crystallisation. When we heat the crystals, these water molecules are removed and the salt turns white.

(iv) Concentrated nitric acid appears yellow when left standing in a glass bottle due to the dissolution of reddish brown nitrogen dioxide in the acid. Nitrogen dioxide is produced because of the thermal decomposition of a portion of nitric acid.

(v) When HCl gas comes in contact with moist air, it gives white fumes due to the formation of hydrochloric acid.

(i) is Gay–Lussac's law of combining volumes.The law states thatwhen gases react together to produce gaseous products, the volumes of reactants and products bear a simple whole number ratio with each other provided the volumes are measured at the same temperature and pressure.

(i) The polar covalent compound in the gaseous state that doesnot conduct electricity is carbon tetrachloride.

(iv) An alkali which completely dissociates into ions is lithium hydroxide.

(v) An alloy used to make statues is bronze.

Conversion of Al(OH)3 to pure alumina

(i) pH of acetic acid is greater than dilute sulphuric acid. So, acetic acid contains low concentration of H+ions.

(ii) The indicator which does not change colour on passage of HCl gas is phenolphthalein.

(iii)The acid which cannot act as an oxidisingagent is conc.HCl.

(b) Isomers of pentane:

(iii) When silver nitrate solution is added to the magnesium chloride solution, silver chloride precipitates out.

(i) Nickel is reduced at the cathode. Water is oxidised to oxygen at the anode.