What is a chemical bond? How to draw the electron–dot structure of NaCl? Find answers in Frank Solutions for ICSE Class 10 Chemistry Chapter 2 Chemical Bonding. The Frank Chemistry solutions at TopperLearning cover examples of solid covalent compounds, gaseous non-polar compounds and more.

In these ICSE Class 10 Chemistry chapter solutions, you will also learn about the structures of ammonium and hydronium ions. You may also check our video lessons, Selina Solutions and practice tests to revise this Chemistry chapter further.

Solution 1
Chemical bond: A chemical bond may be defined as the linkage that stands for the force which actually holds the atoms together within the molecule.
Chemical bonding: The phenomenon during which a chemical bond is formed is called chemical bonding.
Solution 2
Atoms combine to attain the electronic configuration of nearest inert gases as the atoms of inert gases are very stable having 8 electrons or duplet (or 2 electrons in case of helium atom) in their outermost shell.
Solution 3
Electrovalent compounds: The chemical compounds containing electrovalent bonds are called electrovalent or ionic compounds.
For example: Sodium chloride (NaCl).
Covalent compounds: The chemical compound, formed as a result of mutual sharing of electrons or electron pairs thereby establishing a covalent bond is called a covalent or molecular compound.
For example: Hydrogen molecule (H2)
Solution 4
The conditions for the formation of an electrovalent bond are:
1) Low ionization energy of electropositive atom
2) High electron affinity of the electronegative atom.
3) Large electronegativity difference.
4) High lattice energy.
Concept Insight:  1) Lower is the ionization energy of atom, higher is its tendency to lose electron to form a cation and form ionic bond.
2) Higher the value of electron affinity of an atom, greater will be its tendency to form anion and form ionic bond.
3) If the electronegativity difference of two elements is higher, more easy will be the transfer of electrons and hence more chances of ionic bond formation.
4) Lattice energy is the energy released when positive and negatively charged atoms called ions come closer to form a crystal because the attractive forces among the oppositely charged ions tend to decrease the energy of the system. Higher is the lattice energy, greater will be the ease of formation of the compound.
Solution 5
Solution 6
Hydrogen chloride has a polar covalent bond because in hydrogen chloride the higher electronegativity of chlorine atom attracts the shared electron pair towards itself. As a result, the chlorine atom gets a partial negative charge while the hydrogen atom gets a partial positive charge. Hence such a covalent bond with charge separation is called polar covalent bond.
While methane has a non polar covalent bond  because in case of methane molecule the shared electron pairs are at equal distance from the carbon and hydrogen atoms, because neither the carbon atom nor the hydrogen atom has enough electronegativity difference  between each other to attract the shared pairs of electrons towards itself. Hence no charge separation occurs in the covalent bond due to which it is called non polar covalent bond.
Concept Insight:  When a covalent bond is formed between the atoms of the same elements of equal electronegativity then the electron pairs are shared equally between the atoms and the bond so formed is called non polar covalent bond. On the other hand, if the covalent bond is formed between atoms of different elements, with difference in electro negativity, the electrons are not shared equally between the atoms. The more electronegative atom pulls the bonded pair of electrons towards itself and acquires negative charge while the other less electro negative atom acquires positive charge and the bond becomes polar covalent bond.
Solution 7
In terms of electron transfer, oxidation is defined as the phenomenon in which an atom loses electron to form a positively charged cation while reduction is defined as the phenomenon in which an atom gains electron to form a negatively charged ion called anion.
During formation of ionic bond one atom undergoes oxidation while another atom undergoes reduction.

Solution 10
(a) Sodium chloride dissolves in water because it is an ionic compound and water is also a polar covalent compound. Water decreases the electrostatic forces of attraction among the sodium and chloride ions due to which these ions become free in water, hence sodium chloride dissolves.
On the other hand, carbon tetra chloride has non polar covalent bond and water has polar covalent bond. Hence, water is unable to break the non polar covalent bond of carbon tetra chloride. So it is insoluble in water
(b) Helium does not form He2 molecule as it has its outermost shell complete i.e. two electrons in its valence shell. Due to this complete valence shell helium atom is very stable hence does not participate in chemical bonding to form He2 molecule.
(c) Pure water does not conduct electricity because it has a polar covalent molecule hence does not have ions in it which can conduct electricity.
On adding sodium chloride to pure water, sodium chloride breaks apart into sodium and chloride ions because water being polar decreases the strong forces of attraction among sodium and chloride ions. Now, pure water has ions present in it which can conduct electricity.
(d) Cl2 is a non polar molecule because the bond is between same atoms that is chlorine with zero electronegativity difference among them. So the shared electron pair is attracted equally by the two chlorine atoms hence there is no separation of charges in the bond formed so the chlorine molecule is non polar.
In case of HCl the bond is formed between two different atoms that is hydrogen and chlorine with enough electro negativity difference so that the shared electron pair is attracted towards more electronegative chlorine atom which acquires partial negative charge while the hydrogen atom acquires partial positive charge hence HCl is a polar molecule.
(e) Metals have low ionization energy due to which they can lose their outermost electrons easily to form positive metallic ions hence metals are electropositive.
For example Sodium metal always form Na+ ions, Potassium forms K+ ions etc.
Solution 11
(a) (i) when the electro negativity difference between the two atoms is high then the bond formed will be purely ionic.
(ii) When the electro negativity difference between the two atoms is low then the bond formed will be polar covalent bond.
(iii) When the electro negativity difference between the two atoms is zero then the bond formed will be purely covalent.
(b) Ionic compounds = NO, NH4Cl,  NH4NO3

The necessary conditions for the formation of covalent molecule are:
Number of valence electrons: Both the participating atoms should have four or more valence electrons in their valence shell.
Equal electro negativities: The combining atoms should have equal electro negativities so that no transfer of electrons takes place.
Equal electron affinities: The combining atoms should also have equal electron affinities i.e. equal attraction for electrons.
Ionization energy: It should be high for both the atoms so that there is no chance of removal of electrons.
High nuclear charge and small inter nuclear distance: Both these conditions favor the formation of covalent bond because during the formation of a covalent bond the electron density gets concentrated between the nuclei of the combining atoms and this electronic charge is responsible for holding the two nuclei together.
The properties of covalent compounds are:
Nature: They are generally volatile liquids or gases. Some may be gases like urea, sugar etc.
Low melting and boiling points: Since the intermolecular forces of attraction are weak, very small amount of heat energy is required to overcome these forces hence their melting and boiling points are low.
Electrical conductivity:  Since covalent compounds are made up of molecules and not ions, so they do not conduct electricity.
Solubility: These are insoluble in water but soluble in organic solvents.
Ionization in solution: These do not ionize when dissolved in water except some polar covalent compounds like HCl.
Molecular reactions:  These participate in reactions as a molecule so the reactions are called molecular reactions. These are slow reactions.

(b) Structure of Ammonium ion: Ammonium ion (NH4+) is formed when a hydrogen ion or proton combines with ammonia molecule. Nitrogen atom in ammonia has a lone pair of electrons on it which it shares with the hydrogen ion which tends to acquire the configuration of helium atom. Thus, a co-ordinate bond results between nitrogen atom and hydrogen ion in ammonium ion.

These hydronium and chloride ions produced on dissolution of HCl in water are responsible for conduction of electricity.
Solution 19

(a) The electrovalent bond or ionic bond is called heteropolar bond.

(b) When ionic compounds are dissolved in water, their constituent ions get separated; this phenomenon is called ionisation or dissociation.

(c) Ionic compounds generally are soluble in water and insoluble in organic solvents.

(e) A coordinate bond is represented by an arrow pointing from donor to acceptor atom.

(f) Four single covalent bonds are formed between the carbon and chlorine atoms.

ionises when dissolved in water

One atom of carbon shares four electron pairs, one with each of the four atoms of hydrogen. 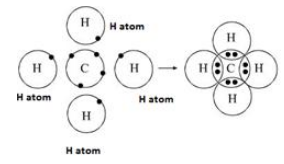 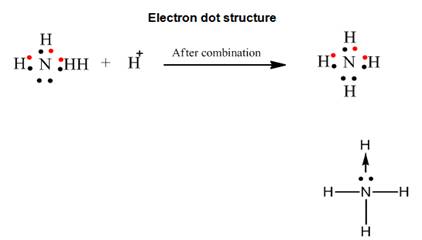 (a) The compound that does not have a lone pair of electrons is carbon tetrachloride.