Aim. To carry out an electrolysis of water.

Theory. Water is a ubiquitous chemical substance vital for all known forms of life. It is composed of hydrogen and oxygen. The chemical formula for water is H2O. One molecule of water has two hydrogen atoms covalently bonded to a single oxygen atom.

As the electricity from the battery passes through and between the electrodes (the pencils), bubbles of gases are formed at different gases. Water splits into hydrogen and chlorine gas, which collect as very tiny bubbles around each pencil tip. Hydrogen collects around the cathode and the chlorine gas collects around the anode. How can you get chlorine from H2O? This is because a secondary reaction takes place because of sodium chloride. Oxygen is not given off in this experiment. That's because the oxygen atoms from the water combine in the liquid with the salt i.e. sodium chloride to form hydroxyl ions. The chlorine gas is from the chloride in the salt. The oxygen in the hydroxyl ions stays in the solution. So, what is released in this reaction is not oxygen but is chlorine gas that collects around the pencil tip. Around the other pencil is hydrogen gas. In real electrolysis systems, a different solution is used, and higher levels of electricity help to split the water molecules into hydrogen and oxygen without this secondary reaction.

1.   Take two regular pencils and sharpen each pencil at both ends.

2.   Take a cardboard piece and cut the cardboard to fit as the cover of the glass.

3.   Push the two pencils into the cardboard, about an inch apart.

4.   Take one piece of the electrical wire and connect its one end on the positive side of the battery and the other to the black graphite (the "lead" of the pencil) at the top of the sharpened pencil.

5.   Repeat the same for the negative side of the battery connecting it to the second pencil top.

6.   Take a glass ¾ th filled with warm water. Dissolve about a teaspoon of salt into the warm water and let it remain as it is for a while. The salt helps conduct the electricity better in the water.

7.   Place the other two ends of the pencil which are not connected to the electrical wire into the salted water.

As the electricity from the battery passes through and between the electrodes (the pencils), bubbles of gases are formed at different gases.

1. The pencils ends should be sharpened properly so that flow of electricity takes place.

2. The ends of the wires should be tied properly with the correct connections. 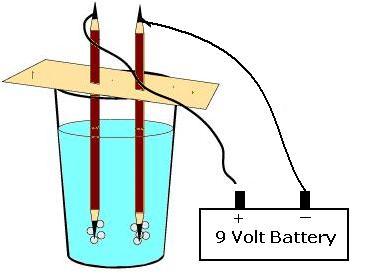