Squares and circular altars were used for household rituals.

Whereas altars having shapes as combinations of rectangles, triangles and trapeziums were used for public worship.

In ancient India, altars with combination of shapes like rectangles, triangles and trapeziums were used for public rituals.

In Indus Valley Civilization (about 300 BC) the bricks used for construction work were having dimensions in the ratio is 4:2:1.

The famous treatise 'The Elements' was divided into 13 chapters by Euclid.

Euclid belongs to the country, Greece.

Thales belongs to the country, Greece.

Pythagoras was a student of Thales.

A statement that requires a proof is called a theorem.

'Lines are parallel if they do not intersect' is started in the form of a definition.

Euclid stated that 'All right angles are equal to each other' in the form of a postulate.

This is Euclid's Postulate 4.

Note: The answer in the book is option (a). But if you have a look at the Euclid's postulate, the answer is a postulate.

A pyramid is a solid figure, whose base is any polygon.

The side faces of a pyramid are triangles.

A solid has 3 dimensions.

A surface has 2 dimensions.

A point is an exact location. A fine dot represents a point. So, a point has 0 dimensions.

Boundaries of solids are surfaces.

Boundaries of surfaces are curves.

The number of planes passing through three non-collinear points is 1.

Axioms are assumed as universal truths in all branches of mathematics because they are taken for granted, without proof.

Two lines are said to be parallel, if they have no point in common.

Options (a), (b) and (d) have a common point, hence they are not parallel.

In option (c), the floor and the ceiling of a room are parallel to each other is a true statement.

In option (a), infinite number of line can be drawn to pass through a given point. So, it is not a true statement.

In option (b), only one line can be drawn to pass through two given points. So, it is not a true statement.

'If two circles are equal, then their radii are equal' is the true statement.

In option (d), A line has no end points. A line has an indefinite length. So, it is not a true statement.

Option (a) is true, since we can pass an infinite number of lines through a given point.

Option (b) is true, since a unique line can be drawn to pass through two given points.

As shown in the above diagram, a ray has only one end-point. So, option (d) is true.

Hence, the only false statement is option (c).

A point C is called the midpoint of a line segment

, if C is an interior point of AB such that

Observe the above figure. Clearly, C lies between A and B if AC + CB = AB.

That means, points A, B, C are collinear.

Euclid's second axiom states that 'If equals are added to equals, the wholes are equal'.

A theorem is a statement that requires a proof. Whereas, a basic fact which is taken for granted, without proof, is called an axiom.

Example of axiom: A unique line can be drawn through any two points.

(i) Line segment: The straight path between two points is called a line segment.

(ii) Ray: A line segment when extended indefinitely in one direction is called a ray.

(iv) Parallel Lines: Two lines in a plane are said to be parallel, if they have no common point, i.e., they do not meet at all.

(v) Half-line: A ray without its initial point is called a half-line.

(vi) Concurrent lines: Three or more lines are said to be concurrent, if they intersect at the same point.

(vii) Collinear points: Three or more than three points are said to be collinear, if they lie on the same line.

(viii) Plane: A plane is a surface such that every point of the line joining any two points on it, lies on it.

and their corresponding point of intersection is R.

and their corresponding point of intersection is P.

and their point of intersection is R. 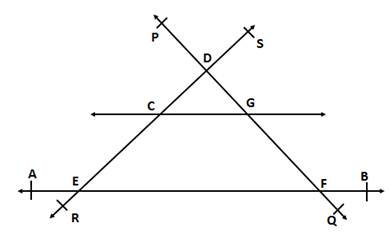 (iii) Four concurrent points: Points A, E, F and B

(i) An infinite number of lines can be drawn to pass through a given point.

(ii) One and only one line can pass through two given points.

(iii) Two given lines can at the most intersect at one and only one point. 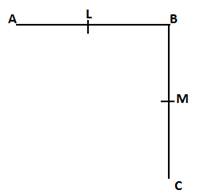