Score marks in short answer questions easily by practising with our NCERT Solutions for CBSE Class 9 Mathematics Chapter 10 Circles. Write and practise with TopperLearning’s expert solutions for long answer questions based on chords. By revising a variety of textbook questions, you’ll learn how to prove chord properties in a step-wise format.

With CBSE Class 9 Maths chapter solutions, learn the application of important concepts such as RHS congruence rule, angle sum property of a triangle etc. This knowledge will help you think logically and arrive at correct answers in your Maths exam. Other than expert solutions, you may want to use sample papers, online mock tests, concept videos etc. to revise circles for exam preparation.

Solution 2
(i)  True, all the points on circle are at equal distance from the centre of circle, and this equal distance
it called as radius of circle.
(ii) False, on a circle there are infinite points. So, we can draw infinite number of chords of given length. Hence, a circle has infinite number of equal chords.
(iii) False, consider three arcs of same length as AB, BC and CA. Now we may observe that for minor arc BDC. CAB is major arc. So AB, BC and CA are minor arcs of circle.

(iv) True, let AB be a chord which is twice as long as its radius. In this situation our chord will be passing through centre of circle. So it will be the diameter of circle.

(v) False, sector is the region between an arc and two radii joining the centre to the end points of the arc as in the given figure OAB is the sector of circle.

(vi) True, A circle is a two dimensional figure and it can also be referred as plane figure.

Solution 1
A circle is a collection of points which are equidistant from a fix point. This fix point is called as the centre of circle and this equal distance is called as radius of circle. And thus shape of a circle depends on the radius of the circle.

AB = CD            (by CPCT)
Hence, if chords of congruent circles subtend equal angles at their centres then chords are equal.

Solution 1
Consider the following pair of circles.
(i) circles don't intersect each other at any point, so circles are not having any point in common.

(ii) Circles touch each other only at one point P so there is only 1 point in common.

(iii) Circles touch each other at 1 point X only. So the circles have 1 point in common.

We can have a situation in which two congruent circles are superimposed on each other, this situation can be referred as if we are drawing circle two times.

Solution 2
Following are the steps of construction: 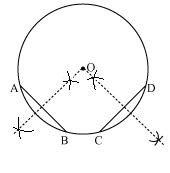 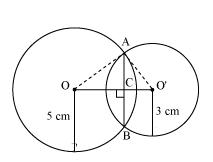 Solution 2
Let PQ and RS are two equal chords of a given circle and there are intersecting each other at point T.

Draw perpendiculars OV and OU on these chords.
In 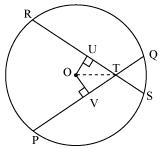 Let PQ and RS are two equal chords of a given circle and there are intersecting each other at point T.
Draw perpendiculars OV and OU on these chords.
In

Solution 4
Let us draw a perpendicular OM on line AD. 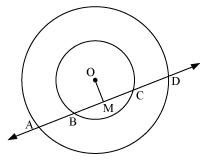 Here, BC is chord of smaller circle and AD is chord of bigger circle.
We know that the perpendicular drawn from centre of circle bisects the chord. 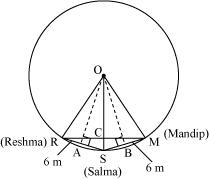 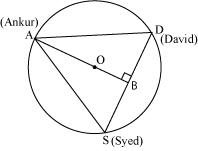 So, length of string of each phone will be

Solution 1
We may observe that

OAB is an equilateral triangle.
So, each interior angle of this triangle will be of 60o

Consider PR as a chord of circle.
Take any point S on major arc of circle.
Now PQRS is a cyclic quadrilateral.

Let ABCD a cyclic quadrilateral having diagonals as BD and AC intersecting each other at point O.

(Consider BD as a chord)

(Considering AC as a chord)

ABC = 90o
Here, each interior angle of cyclic quadrilateral is of 90o. Hence it is a rectangle.

ADC are on same side of transversal AD

BCD = 180o          [Using equation (1)]
This equation shows that the opposite angles are supplementary.
So, ABCD is a cyclic quadrilateral.
Solution 9 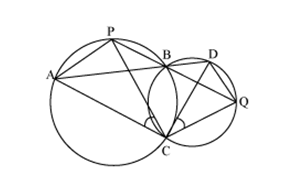 ABC
Two circles are drawn while taking AB and AC as diameter.
Let they intersect each other at D and let D does not lie on BC.
Join AD 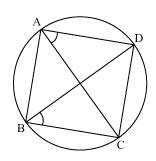 Let ABCD be a cyclic parallelogram.

A = 90o
Parallelogram ABCD is having its one of interior angles as 90o, so, it is a rectangle.

Let two circles having their centres as O and intersect each other at point A and B respectively.
Construction: Let us join OO',

OBO'             (by CPCT)
So, line of centres of two intersecting circles subtends equal angles at the two points of intersection. 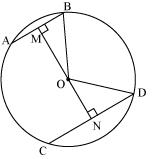 (Perpendicular from centre bisects the chord)

So, radius of circle is found to be

So, distance of bigger chord from centre is 3 cm.
Solution 4

Let ABCD be a rhombus in which diagonals are intersecting at point O and a circle is drawn taking side CD as its diameter.
We know that angle in a semicircle is of 90o.

Let two chords AB and CD are intersecting each other at point O.
In

A = 90o
As ACBD is a parallelogram and one of its interior angles is 90o, so it is a rectangle.

A is the angle subtended by chord BD. And as

It is given that BE is the bisector of

Similarly we can prove that

AB is common chord in both congruent circles.

A meet at point D.
Let perpendicular bisector of side BC intersects it at E.

Perpendicular bisector of side BC will pass through circum centre O of circle. Now,

A meet at point D.

BAD
It is possible only if BD will be a chord of the circle. For this the point D lies on circum circle.
Therefore, the perpendicular bisector of side BC and angle bisector of

A meet on the circum circle of triangle ABC.