Complete your revision at your own speed with TopperLearning’s chapter-wise NCERT textbook solutions for CBSE Class 9 Geography Chapter 2 Physical Features of India. Learn about the Earth’s lithosphere, the Bhabar belt, the Thar Desert etc. Read our expert solutions to understand what differentiates the Peninsular Plateau from the Himalayan Region.

To score excellent marks in your CBSE Class 9 Geography exam, you can study from our NCERT solutions. These solutions can be accessed as many times as you want at our study portal. Additionally, you can browse through our Geography study resources such as online practice tests, concept videos, mock exam papers etc. 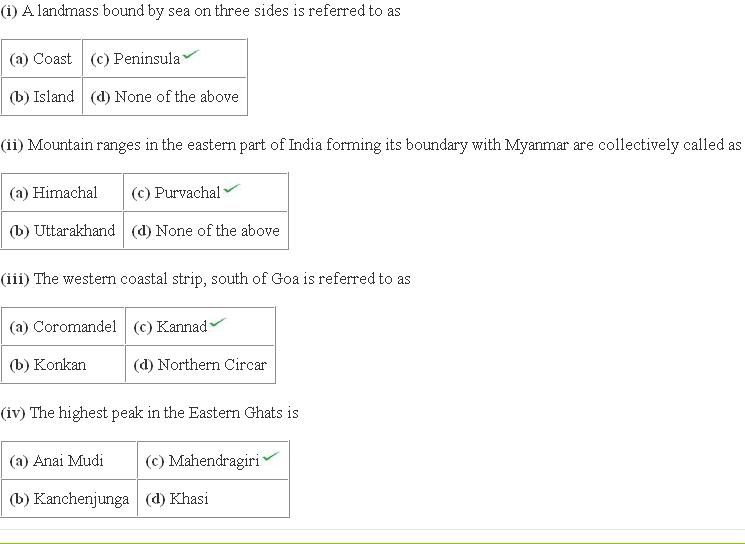 (i) The Lithosphere is broken into number of plates. The convectional currents present below the solid layer of the earth’s crust split the crust or the lithosphere into a number of large fragments or plates. These major or minor rigid plates are called tectonic or lithospheric plates. The movement of these plates has been responsible for changing the position and sizes of continents for millions of years.

(ii) Gondwana land is the southern part of the ancient super continent Pangea. Present continents that were the part of Gondwana land are Australia, India, South Africa, Antarctica and South America.

(iii) The bhabhar is that part of the Northern Plains where the rivers, after descending from the mountains, deposit pebbles. It is a narrow belt, having a width of about 8 to 16 km and lies parallel to the slopes of the Shiwaliks.

(v) The Malwa plateau lies between the Aravali and the Vindhyan ranges.

(vi) The Lakshadweep Islands that lie close to the Malabar coast of Kerala are composed of small coral islands.

(ii) Bhangar soil is older alluvial soil. Large parts of the Northern Indian Plains are formed of the bhangar soil. The soil presents a terrace like feature.

Khadar soil is new and younger deposits of the alluvium soil on the flood plains. This soil is renewed every year and thus is comparatively more fertile than the bhangar soil.

The Earth’s Lithosphere is broken into number of plates called tectonic plates. These plates were formed due to the convectional currents occurring under the surface of the Earth. The Indo Australian plate got separated from the Gondwana land and drifted towards the north.

As it drifted towards the north, it collided with the Eurasian Plate. As a result of this collision, the sedimentary rocks which were settled in the large scale depression in the Earth’s crust called Tethys were folded and formed the mountain system of western Asia and the Himalayas.

The major physiographic divisions of India are:

(i) The Himalayan Mountains

The northern plains have been formed by three major river systems, the Indus, the Ganga and the Brahmaputra. This plain has been formed of alluvial soil.The Northern Plains are divided into three regions. The western part of the Northern Plains is known as the Punjab Plains. The larger part of this plain lies in Pakistan. It is drained by the river Indus and its tributaries- the Ravi, Beas, Satluj, Jhelum and Chenab. The Ganga Plain is spread over the states of Haryana, Delhi, U.P., Bihar and some parts of Jharkhand and West Bengal. Assam is the part of Brahmaputra plains. The Northern Plains presents various relief features. They can be divided into four regions based on the variations in the relief features:

(i) The Great Indian Desert or the Thar Desert is located in western Rajasthan. It is a sandy plain receiving rainfall as low as 150mm in a year. THE vegetation cover in the region is extremely scarce. Some small streams appear during the rainy season but they quickly disappear into the sand. Luni is the only large river in this region. Barchan, crescent shaped sand dunes are prominent feature of the desert.

(iii) India has two groups of islands. The Lakshadweep islands are located in the Arabian Sea close to the Malabar Coast of Kerala. These are the small group of the coral islands. Kavaratti Island is the administrative capital of the Lakshadweep. The Pitt Island is uninhabited and has a bird sanctuary.  The Andaman and Nicobar islands are located in the Bay of Bengal and are an elevated portion of the submarine mountains. Since these islands lie close to the Equator, the climate remains hot and wet throughout the year and has dense forests.