NCERT Solutions for CBSE Class 9 Geography Chapter 4 Climate discuss the climatic conditions in India and what influences Indian climate. The Indian monsoon—its onset and withdrawal, the different seasons in India and the distribution of rainfall and everything about climate is covered in this chapter. 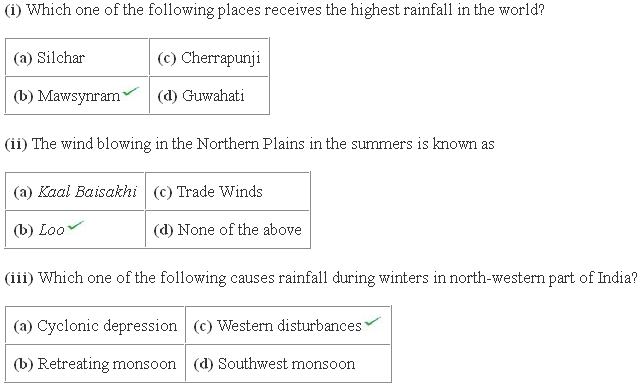 (i) The controls affecting the climate of India are: latitude, altitude, pressure and wind system, distance from the sea, ocean currents and relief features.

Latitude: Nearly half of India, lies south of the Tropic of Cancer, while the rest, lies in the sub-tropics.

The climate therefore has characteristics of tropical as well as subtropical climates.

Altitude: To the north are mountains with an average height of 6,000 metres. India also has a vast coastal area with maximum elevation of 30 metres. The difference in altitudes results in different climatic conditions in the country.

Relief features: The Himalayas prevent the cold winds from Central Asia entering the subcontinent resulting in milder winters. the three water bodies surrounding India also have a moderating effect on its climate.

(ii) The word ‘monsoon’ usually refers to the seasonal reversal in the direction of wind during the year. The climate of India is strongly influenced by monsoon winds. Hence, it is said to have a monsoon type of climate.

(iii) The north-western part of India comprising the Thar Desert/ Indian Desert experiences the highest diurnal range of temperature. This region is devoid of any vegetation cover and is covered with sand. Sand absorbs heat quickly during the day and loses heat very quickly at night. As a result of this phenomenon, there is a wide difference between day and night temperatures in this region. The day temperature may rise to 55°C and drop down to near 10°C the same night.

(iv) The south-west monsoon winds are responsible for rainfall along the Malabar Coast.

(v) Jet streams are a narrow belt of high-altitude westerly winds in the troposphere with speeds varying from about 110km/hr in summer to 184km/hr in winter. The sub-tropical westerly jet stream blowing south of the Himalayas are responsible for the western cyclonic disturbances experienced in the north and north-western parts of the country during the winter months. The sub-tropical easterly jet stream blowing over peninsular India is responsible for the tropical cyclones that affect the eastern coastal regions of India during the monsoon as well as during the October to November period.

(vi) The word ‘monsoon’ usually refers to the seasonal reversal in the direction of wind over a large area during a year. In summer, it blows moist air from the ocean to the land and in winter it blows dry air off shore.
“Break” in monsoon refers to the wet and dry spells of the monsoon. The monsoon rains take place for a few days at a time and are interspersed with rainless intervals.” Breaks “are related to the movement of the monsoon trough.

(vii) Despite variations in temperature conditions across India, a sense of unity is imposed by the monsoon. The seasonal alteration of the wind systems and the associated weather conditions provide a rhythmic cycle of seasons that binds the entire country. The Indian landscape, animals, plants, the life of the people and their occupations all revolve around the monsoons. The water they provide for agriculture and the rivers that carry this water also create a unifying bond.

In summer, the monsoon winds blow both from the Bay of Bengal and the Arabian Sea. The monsoons which rise from the Bay of Bengal cause heavy rainfall in the Brahmaputra Valley and the Assam Hills (i.e. in Cherrapunji) as these regions lie on the windward side of the mountains. Because of the Himalayas, they then take a western turn and move up the Ganga Valley but as they proceed westwards they carry little moisture. The western parts of the Northern India also lie in the rain shadow area and therefore the amount of rainfall decreases towards the west. As such Kolkata gets a rainfall of 119 cm, Patna 105 cm, Allahabad 76 cm and Delhi 56 cm.

(i) During winter, a high-pressure area develops to the north of the Himalayas .Cold dry winds blow from this region to the low-pressure areas over the warm oceans to the south. These off- shore winds blow in a north east direction and usually do not bring rain.

In summer, a low-pressure area develops over interior Asia as well as over northwestern India. This causes a complete reversal of the direction of winds. Air moves from the high-pressure area over the southern Indian Ocean, in a south-easterly direction, crosses the equator, and turns right towards the low-pressure areas over the Indian subcontinent.

These are the Southwest Monsoon winds that blow over the warm oceans, gather moisture and bring widespread rainfall to India.(ii) The rainfall received by India is largely due to the south-west monsoon winds. As these winds blow over warm oceans, they bring abundant moisture to the subcontinent. They are strong and blow at an average velocity of 30 km per hour covering the country in about a month. The duration of the monsoon is between 100 to 120 days. Hence, the bulk of rainfall received by the country is concentrated over a few months.

(iii) During the winter season, north-east trade winds prevail over India. They are off-shore winds that blow from land to sea and usually do not bring rain. Because of India’s topography however they change their direction and become northeasterly over the Bay of Bengal where they pick up moisture. They then blow towards the Tamil Nadu Coast which receives winter rainfall due to these winds.

(iv) The delta region of the eastern coast of India is frequently struck by cyclones. In early November the low pressure conditions over north west India are transferred to the Bay of Bengal. This shift is associated with cyclonic depressions. . The cyclonic depressions that originate over the Andaman Sea are brought in by the sub-tropical easterly jet stream blowing over peninsular India during the monsoon as well as during this October to November period. Tropical cyclones are very destructive causing great damage to life and property.

(v) Parts of Rajasthan, Gujarat and the leeward side of the Western Ghats are drought-prone because of the scanty rainfall received by these regions during the monsoon rains. The progressive decrease in the humidity of the winds of the Bay of Bengal branch causes the amount of rainfall to decrease from east to west in northern India. As the leeward side of the western Ghats is the rain-shadow area, the places located in this region receive very little rainfall from the Arabian Sea branch. It is the windward side of the Ghats that receives the maximum rain.

The climate of India is described as that of the monsoon type. But within this general pattern there are certain regional variations in climatic conditions. This is because of the variations in temperature, precipitation, atmospheric pressure, wind, humidity and altitude from place to place.

The following are a few examples which prove the above fact:

Direction of the Rain-bearing Winds - The direction of the Rain-bearing winds has a great impact on the climate of a place. The summer monsoons arising from the Arabian Sea because of their south-west direction strike the Western Ghats first and cause heavy rainfall (about 250 cm). The regions located in the lee ward side of the mountains receive little rainfall. Therefore, Western Ghats receive heavy rainfall and the eastern Ghats receive scanty rainfall.

Form of Precipitation - The form of precipitation whether it is in the form of light rains or heavy snow also influences the climate of an area. In winter, north-west of India gets some rains due to the Western Disturbances. As a result, there is little rain in the plains of Punjab and Haryana but there is heavy snowfall in the Western Himalayas especially in Himachal Pradesh and Jammu and Kashmir. All this is due to the change in the form of precipitation.

Amount of Rainfall - Difference in rainfall is bound to create variations in climate. In India, there are places like Mawsynram which receives 1080 cm of rainfall annually. This is perhaps the highest rainfall all over the world. On the other hand, there are places in India, especially in Rajasthan, which gets 20 cm of annual rainfall.

Rainfall Regime or Seasonal Distribution of Rains - In India, there are many parts which get rainfall only during the summer while many others remain dry during that season. On the other hand, there are certain places which get rainfall in winter alone while there are others which get scanty or no rainfall during winter. For example, Tamil Nadu and Andhra Pradesh get much of their rainfall in winter season, and in summer they are almost dry. This seasonal distribution of rainfall has a great bearing on climate. In summer both Tamil Nadu and Andhra Pradesh experience dry and hot season while the rest of the country especially Kerala, Karnataka and Maharashtra located on the western-coast of India experience a pleasant climate.

Since there is development of high pressure areas over the seas, the warm winds blowing over the Indian Ocean pick up enough moisture and the strike the Indian sub-continent in the first week of June.

The Monsoon winds then get divided into two branches- the Arabian Sea branch and the Bay of Bengal branch. While the Arabian Sea branch reaches Mumbai by the 20th of June, the Bay of Bengal rapidly approach the north eastern part of the country by the first week of June. The rainfall in India is largely affected by the relief features. For example, the places lying in the windward side of the mountains get adequate rainfall while those lying in the leeward side get scanty rainfall. By the first week of July, rainfall reaches in the northern parts of the country.

The Monsoon begins to retreat by early September from the north western parts of the country. By early December, Monsoon completely retreats from the entire country.

In India, the cold weather season begins from the month of December and lasts till February. January is the coldest month. During this period temperature varies from 10OC to 15OC in northern plains and 25OC in southern parts of the country. A high pressure area develops over the northern plains due to the cold climatic conditions. The cold dry winds blow from the high pressure towards the low pressure equatorial regions. These winds are north-westerly in the Ganga plains and north-easterly over the Bay of Bengal. Only two parts of the country receive rain during this season. First is the north-western part of the country which receives rainfall, caused by the Western Cyclonic Disturbances which originates in the Persian Gulf and Mediterranean regions. Second is the coast of Tamil Nadu which gets rainfall in winter because of the Retreating Monsoons which blow over the Bay of Bengal. Other parts of the country experiences a pleasant weather with clear skies and bright sunshine.

Characteristics of the Indian Monsoon