Solution I-1
Evelyn was seventeen years old when she went to the Royal Academy of Music in London.

Solution I-2
Evelyn Glennie’s loss of hearing had been gradual. Her deafness was first noticed by her mother when Evelyn was eight years old. She was once waiting to play the piano. When her name was called, she did not move. That was when her mother realized that Evelyn had not heard anything. For quite a while Evelyn managed to conceal her growing deafness from her friends and teachers. Her deafness was confirmed when she was eleven. Her marks had deteriorated and her headmistress had urged her parents to take her to a specialist.  It was then discovered that gradual nerve damage had severely impaired her hearing.
Solution II-1

While most of her teachers discouraged her percussionist Ron Forbes was the first person to notice Evelyn’s potential and helped her continue with her music.  He began by tuning two large drums to different notes. He asked Evelyn not to listen through her ears but to try and sense the sound in some other manner. Suddenly Evelyn realized that she could feel the higher drum from the waist up and the lower drum from the waist down. Forbes repeated the exercise and Evelyn realized that she could sense certain notes in different parts of her body.

Solution II-2
Evelyn always delighted her audience. She had toured the United Kingdom with a youth orchestra. She auditioned for the Royal Academy of Music and scored one of the highest marks in the history of the academy. She gradually moved from orchestral work to solo performances. She had a very hectic international schedule. Apart from the regular concerts, she gave free concerts in prisons and hospitals. She gave high priority to classes for young musicians and was a shining inspiration for deaf children.
Solution III-1

Evelyn heard music by sensing the notes in different parts of her body. When Ron Forbes tuned two drums to different notes and asked her to sense the sound without using her ears, she realized that she could feel the higher drum from the waist up and the lower drum from the waist down. She learnt how to open her mind and body to sounds and vibrations. It was sheer determination and hard work. When she played the xylophone, she could sense the sound passing up the stick into her fingertips. By leaning against the drums, she could feel the resonances flowing into her body. On a wooden platform, she removed her shoes so that the vibrations could pass through her bare feet and up her legs. She herself said that music poured in through every part of her body. It tingled in the skin, her cheekbones and even in her hair.

1. The  pungi was a 'reeded noisemaker.'

2. A barber transformed the pungi into a shehnai.

4. Bismillah Khan learnt to play the shehnai from Ali Bux. 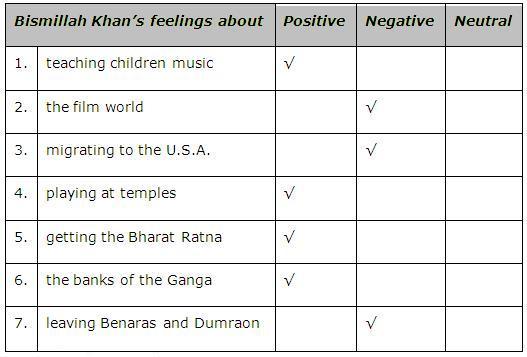 The pungi produced such a shrill unpleasant sound that the word itself became synonymous with any reeded noisemaker. Owing to this, Aurangzeb banned the playing of the pungi at his royal residence.

The barber who decided to reinvent the harsh sounding pungi chose a pipe with a natural hollow stem that was longer and broader than that of the pungi. The result was the shehnai, which also had a better tonal quality.

The shehnai was a part of the traditional ensemble of nine instruments found at the royal courts. Till recently, they were played only in temples and at weddings, but Ustad Bismillah Khan changed that by introducing the instrument into the classical stage.

Bismillah Khan’s big break came with the opening of the All India Radio in 1938. He was invited to play the shehnai on air and his tunes came to be commonly heard on the radio by the entire nation.

On the momentous occasion of India’s Independence on the 15th of August 1947, Bismillah Khan had the honour of greeting the nation by playing Raag Kafi at the Red Fort. His tunes ushered the nation into an era of independence which made the event historic.

A student wanted Bismilla Khan to start a shehnai school in the U.S.A. He even promised to recreate the atmosphere of Benaras. The offer was turned down by Khansaab stating that the Ganga cannot be transported to the U.S.A.

The first instance is when he turned down his student’s offer to start a shehnai school in U.S.A. The second instance is when Khansaab was asked by Shekhar Gupta about moving to Pakistan during the partition, he said that he would never leave Benaras.

1. The school sports team hopes to do better than they did the last time.
2. We all want to go on a vacation.
3. They advised the hearing-impaired child’s mother to take her to a specialist.
4. The authorities permitted us to organize a charity event.
5. A musician decided to take India’s music to the world.

1. The home of royal people (1) the royal residence
2. The state of being alone (5) solitude
3. A part which is absolutely necessary (2) indispensable
4. To do something not done before (5) invent
5. Without much effort (13) effortlessly
6. Quickly and in large quantities (9) thick and fast