Practise important textbook questions with our reference NCERT Solutions for CBSE Class 8 Science Chapter 14 Some Natural Phenomena. These solutions by TopperLearning will give you clarity on concepts like the Richter scale, electroscope etc. Revise chapter-based True or False questions by running through our chapter solutions.

(b) The rod becomes positively charged, while the cloth has a negative charge.

Concept Insight: Although the causes of earthquakes are known, but no instrument has been invented to predict them in advance.

Solution 4
When we take off a sweater, it rubs against our shirt. The rubbing together of sweater and shirt produces opposite electric charges on them. The discharge of these electric charges produces tiny sparks of light as well as crackling sound.
Solution 5

Human body is a conductor of electricity. So, when we touch a charged object, our body conducts its charges to the Earth. That is why a charged body loses its charge, if we touch it with our hand. This phenomenon is known as electric discharge.

If the Richter scale gives a reading of magnitude 3, then the earthquake is not likely to cause much damage. Generally, earthquakes having magnitudes higher than 7 are really destructive earthquakes.

Protective measures against lightning are as follows:

(i) Stay in a completely closed place. If you are moving in a car, then remain there till the lightning is over. Close the windows of the car immediately.

(iii) Do not bath in running water. This may cause an electric shock.

An electroscope can be used to detect whether a body is charged or not. The following figure shows a simple electroscope. 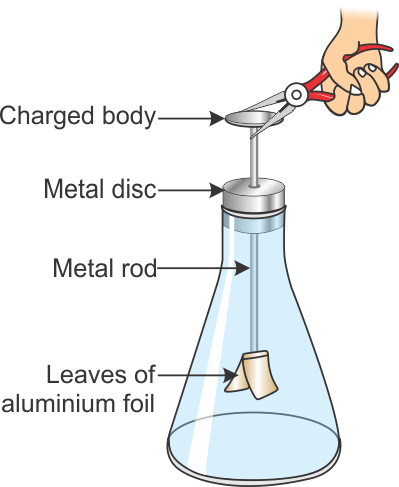 When the metal disc is touched with a charged body, the aluminium strips move away from each other. This happens because some of the charges of the body are transferred to the strips through the metal rod. This method of charging a body is called charging by conduction. The nature of charges on both the leaves is similar. Hence, both the leaves of the aluminium foil move away from each other. If, however, the body is not charged, then the two leaves remain as they are. They do not repel each other.

The three states in India where earthquakes are more likely to strike are Jammu and Kashmir, Gujarat, and Assam.

If we are outside our home and an earthquake strikes, then

(i) We should try to find an open field away from tall buildings, installations, tall trees, and electric wires and poles.

(ii) If travelling in a bus or a car, then we should not come out of it, instead we should drive the vehicle slowly to a clear spot away from buildings, trees etc.

Solution 12
No. We should not carry an umbrella in a thunderstorm. During thunderstorm, which is accompanied by lightning, electric discharge from the clouds can travel through the metallic rod of the umbrella. This may give an electric shock to the person who is carrying it. Hence, it is not safe to carry an umbrella during lightning.