Practise important chapter-specific Q&A with NCERT Solutions for CBSE Class 8 History Chapter 10 The Changing World of Visual Arts. With the textbook solutions, learn the significance of different types of art forms and the meaning of the works of artists. Also, understand the reasons for the popularity of Raja Ravi Varma’s paintings.

Through TopperLearning’s CBSE Class 8 NCERT solutions, find out why certain artists mass produced their paintings through cheap prints. For more learning support, browse through our practice tests and revision notes. If you have chapter-related doubts while revising your History lessons, you can check our ‘UnDoubt’ section to resolve doubts.

Solution 1
(a) The art form which observed carefully and tried to capture exactly what the eye saw is called portraiture.

(b) The style of painting which showed Indian landscape as a quaint, unexplored land is called picturesque.

(c) Paintings which showed the social lives of Europeans in India are called Kalighat paintings.

(d) Paintings which depicted scenes from British imperial history and their victories are called history paintings.

As the Indian national movement began to grow, the popular prints carried the national messages. Figures of ‘Bharat mata’, national leaders and Gods and Goddess killing the British began to be printed. Such prints inspired the people to fight against the British rule.

The main aim of many Indian painters was to establish a connection between art and nationalism. Thus, they wanted to develop a style which would not only be able to imbibe some of the modern techniques of painting but also retain main features of Indian art. Raja Ravi Verman’s works highlights a new national style of art in which he painted scenes from the Indian mythology using western art of oil painting and real life painting.

A new group of artists in Bengal including Abanindranath Tagore rejected the art of Raja Ravi Verman as imitative and westernized. They contended that such style was not suitable for depicting the Indian mythology. They did not believe in oil and realistic style of painting and looked towards the miniature paintings and the art of mural paintings that was depicted in the Ajanta Caves. Some of the paintings of Abanindranath Tagore were influenced by the Rajput miniature and Ajanta style of painting

Later, in 1920s, many artists began to break away from Abanindranath Tagore’s style of painting. His paintings were rejected for making spiritualism as a central theme of the Indian paintings. To them, an artist has to believe in real life than painting from the themes taken from ancient books.

Further, they believed that the contemporary themes like folk dances and tribal way of life should also be the subjects of paintings.

The British history paintings celebrated the British power, their victories and supremacy. They aimed at creating paintings which could leave an ever lasting impression of the British victories not only among the people of Indian but also among the British public. This was a way in which the British could depict themselves as invincible and all powerful.

Raja Ravi Verman was a painter who aimed at creating a style which was an amalgamation of both the national and the modern art. He mixed both modern and national elements in his paintings. He painted real life paintings and used oil colours for depicting Indian mythological themes in his paintings.

He depicted many scenes from Ramayana and Mahabharata. His paintings became popular not only among the Indian princes but also among common masses.

By the early nineteenth century, Calcutta was expanding as a commercial and administrative centre. This was marked by the construction of new buildings and roads. Due to the availability of many new jobs prospective which the city provided, many people came and settled in the city. Due to growing population, village artists including scroll painters and potters  came and settled in the city in the hope of finding new patrons and new buyers of their art.

After 1840, there was a gradual shift in the subject of the Kalighat painters. As the time passed and many social and economic changes began to take place in the society, Kalighat painters began to depict social life under the British rule. Frequently these artists mocked the Indians who imitated the British dressing and life styles and criticised corrupt priests.

The history paintings dramatise and recreate various episodes of British imperial histroy. These paintings celebrated the British-their power, victories and supremacy. One such paiting is the one shown below. 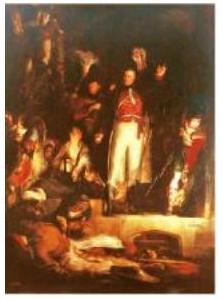 This painting shows the superiority and dominance of the British over the Indians. This painting painted by David Wilkie shows the discovery of the body of Tipu Sultan by the British General, David Baird after Tipu Sultan was defeated in the fourth Anglo Mysore war. In this picture, the painter has shown a defeated and a dead Tipu Sultan lying in a corner with his body hidden in semi darkens. On the contrary, David Baird is shown standing triumphantly besides the body of the dead sultan. This painting present the victory of British imperial forces and the defeat of any force this challenges them. Tipu Sultan lying in semi-darkness and David Baird being lit up by the lantern are also signifying that seem to suggest the invincibility and all-powerful nature of the imperial mater.

The picture also show corpse of Tipu Sultan with torn clothes. David Baird, on the other hand is shown in his full attire standing on an elevated platform. By pointing his for finger, he seems to be discarding Tipu as the thing of the past. He also seems to be pointing out that those people who oppose the British, meet the same fate.