Increase your marks by using TopperLearning’s NCERT Solutions for CBSE Class 8 History Chapter 3 Ruling the Countryside for thorough chapter revision. Read the well-written model answers for your textbook questions by subject experts at our learning portal. Practise the key points to explain the differences between the Mahalwari system and the permanent settlement.

Study with our NCERT textbook solutions for CBSE Class 8 History to understand why indigo farmers protested against European planters after the revolt of 1857. For exam support e-learning materials, check our Class 8 online practice tests and more. 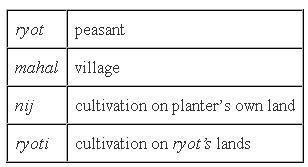 Solution 2
(a)Growers of woad in Europe saw indigo as a crop which would provide competition to their earnings.

(b) The demand for indigo increased in late-eighteenth-century Britain because of the expansion of cotton production as a result of industrialisation, which in turn created an enormous demand for cloth dyes.

(c)The international demand for indigo was affected by the discovery of synthetic dyes.

(d)The Champaran movement was against the indigo planters.

As the Company was worried about the declining revenues, she introduced the Permanent Settlement of Bengal in 1793.

Under the new Munro system of fixing revenue, the revenue officials were driven by the desire to increase income from the land revenues. The demand of high revenues could not be met by the peasants. Consequently, the peasants deserted their villages and fled to the nearby forests.

The European planters forced the ryots to sign a contract to grow indigo on 25% of their land holdings. The farmers who signed the contract were paid money in advance to grow indigo. After the indigo plant was given to the planters after the harvests, farmers were given new loans for growing indigo. The peasants who received advanced loans from the planters realised that the prices they received for the indigo plant was too low and they were always involved in the cycle of debt. Indigo had to be grown on the fertile soil. However, it exhausted the fertility of the soil. The farmers always preferred to grow rice on the fertile soil as once indigo was cultivated, the fertility of the soil decreased. Thus the ryots were reluctant to grow indigo.

After the beginning of the indigo rebellion, many intellectuals from Calcutta began to visit these villages and wrote about the tyranny of the planters and the miseries of the ryots. A Commission was constituted to by the government which held the planters guilty to using coercive methods to deal with the indigo peasants. The Comission also laid down that the ryots after fulfilling the conditions of their contract may refuse to grow indigo on their field. This eventually led to the eventual collapse of indigo plantation in Bengal.