Get help during revision with NCERT Solutions for CBSE Class 8 History Chapter 8 Civilising the Native, Educating the Nation. TopperLearning’s chapter solutions will help you clearly explain the life and works of William Jones. Find out why Gandhi emphasised on teaching handicrafts to children through our expert answers.

In addition, learn about the criticism towards Orientalists expressed by Thomas Macaulay and James Mill in our chapter solutions. Experienced teachers carefully write our chapter-wise NCERT textbook solutions according to the latest CBSE Class 8 History syllabus. You can refer to these notes at any time to improve your understanding of the subject for excelling in your school exam. 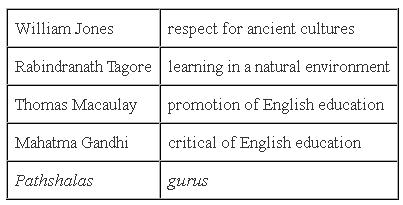 James Mill and Thomas Macaulay criticised the Orientalists. Mill advocated that Western education should be imparted to Indians as it was scientific, practical and useful. According to him, the government should try to provide scientific and technical education to Indians rather than teaching them the literature and poetry of the East.

Macaulay was of the opinion that ‘a single shelf of the European library was worth the whole native literature of Asia and Arabia’. He believed that Indians would be able to read the great literatures produced in the world if they learn the English language. He further advocated that the British had the responsibility of civilising the natives. This could be done by imparting Western education to them.

Gandhi believed that ‘literacy in itself is not education’. He wanted to teach handicrafts to children as this would mark the beginning of true education of children enabling them to produce results from the very initial moment of their learning. To him, handicraft should not only be taught as a mechanical activity with a scientific point of view but also as a process in which children work with their hands, learn a useful handicraft and know how different things operated. According to him, this will lead to the highest development of mind and body.

Gandhi believed that the colonial education filled Indians with the inferiority complex. It was because they were made to believe in the greatness and superiority of the western education. This destroyed their pride in their own culture. After receiving western education, Indians gradually begin to admire the British rule forgetting their own glorious culture and civilisation. Thus, he believed that English education had enslaved Indians. Gandhi wanted Indians to receive education which aims at recovering their pride, dignity and self-respect.

William Jones was a linguist who had the knowledge of Latin, French, English, Arabic and Persian languages. He learned Sanskrit and grammar from learned Brahmins in India. He believed that it was needed to study texts on Indian philosophy and laws as these texts were the sources of information on which the laws and traditions of the Hindus and Muslims were based. Reading and comprehension of these documents could in future become the basis of legal development in India. According to him, this will help the British in administering the country.

William Jones felt the need to study Indian history and translated various Sanskrit texts. He believed that the discovery and translation of the ancient Indian texts would not only lead to the discovery of the lost glories of the ancient Indian texts but would also help the British to learn from the Indian culture. This will also help the British to administer country and become the guardian and the masters of the Indian culture.

Solution 2
(a) James Mill was a severe critic of the Orientalists.

(b) The 1854 Despatch on education was in favour of English being introduced as a medium of higher education in India.

(c) Mahatma Gandhi thought that promotion of literacy was the most important aim of education.

(d) Rabindranath Tagore felt that children ought to be subjected to strict discipline.