Read about concepts such as shifting cultivation in our NCERT Solutions for CBSE Class 8 Geography Chapter 4 Agriculture. With TopperLearning’s study materials, revise the factors that influence agriculture such as soil, climate, technology etc. Also, learn the differences between intensive farming and subsistence farming.

With the NCERT solutions, understand what are primary activities and what are secondary activities while studying about agriculture. For thorough revision of chapter concepts, go through our CBSE Class 8 Geography revision notes and sample papers with solutions. Our chapter-wise study materials can be seamlessly accessed 24/7 according to your Geography study plan.

(i) Agriculture is a primary activity that involves growing of crops, fruits, vegetables, flowers and rearing of livestock.

(iii) Shifting cultivation is a form of agriculture which involves clearing of a plot of land by cutting of trees and burning them. The ashes are then mixed with the soil and crops are grown. After the land has lost its fertility, it is abandoned.  The farmers then move to a new place.

(iv) Plantation agriculture is a type of farming that involves growing of one crop on large farms for profit. The crops could be either a cash crop or beverage crops such as coffee, tea, sugarcane, rubber, banana or cotton. This farming requires large amount of labour and capital. The produce is processed either on the farm or some nearby factories. This type of farming can be found in tropical regions of the world – India, Sri Lanka and Brazil. 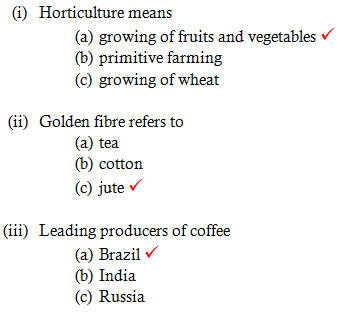 (i) In India, agriculture is a primary activity because:

India being a densely populated country requires food production on a large scale to fulfil the people needs.

(ii) Growing of the crops depends on a variety of factors such as:

(i) Difference between Primary and Secondary activities.