Concept insight: Recall the concept of transport of substances in plants.
Solution 2

The presence of haemoglobin, a red pigment in the red blood cells (RBC's) makes blood appear red in colour. The haemoglobin carries oxygen and transports it to all the parts of the body.

Concept insight: Haemoglobin is red pigment present in blood due to which blood looks red.

Concept insight: The function of the heart is to beat continuously throughout the life and act as a pump to transport blood.
Solution 3

Concept insight: Waste products are toxic to our body. So, it is necessary to excrete them regularly.

Transport of materials is necessary in both plants and animals because:
i.Each and every cell needs a constant supply of oxygen and food (water and nutrients in plants).
ii.Also, waste produced during respiration and other life processes are to be excreted otherwise they will cause harm to the organism.

Concept insight: This question is important from exam point of view. Transport is necessary in multicellular organisms so that each and every cell can get food and oxygen and can expel out waste.

If there are no platelets in the blood, then the blood would not be able to clot. A clot is formed because of platelets. They release blood clotting chemicals at the site of injury. These chemicals form a clot and prevent further bleeding.

Stomata are tiny pores present on the surface of a leaf.

(a)  Stomata help in the exchange of gases.

(b)  Evaporation of water from the leaf surface occurs through stomata. 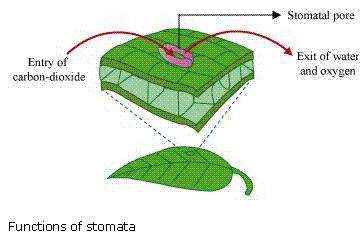 Transpiration is the evaporation of water from the plants. The water evaporates through the stomata present on the surface of the leaves. It is called a necessary evil because:
i.It helps in lowering the temperature of plant thus prevents heat injury to the plant.
ii.Due to transpirational pull water rises in higher plants.
iii.It also causes loss of water absorbed by plants.

Concept insight: Important question from exam point of view. Transpiration is a necessary evil because it lowers the temperature of plant and helps in water absorption by roots.

The main components of blood are:
a)    Red blood cells (RBCs): Red blood cells are the most abundant cells in the blood. These cells contain a red pigment called haemoglobin. It is the haemoglobin which carries oxygen and transports it to all parts of the body.
b)    White blood cells (WBC's): These cells can change their shape and help body in fighting against diseases. Thus, they constitute the immune system of the body.
c)    Platelets: They help in blood clot formation thus prevents excessive bleeding from wounds.
d)    Plasma: All the blood cells are present in plasma. It also contains dissolved nutrients.

Concept insight: List the components of blood and their functions.

Blood is needed by all parts of the body as it is an important part of the transport system of our body. It performs the following important functions:
(i) It transports O2 from the lungs to all the body cells.
(ii) It carries CO2, a waste product back to the lungs so that it can be exhaled easily.
(iii) It transmits heat, thus regulating the body temperature.
(iv) It also fights off diseases and infections.

Concept insight:  Blood carries oxygen and food to all the cells and takes waste substances to kidneys and lungs.