Two words/phrases that mean the same as oddities are

Solution 3
Till the middle of the eighteenth century, bats were roughly the same shape as hockey sticks, curving outwards at the bottom. However, later the curved bat was replaced with the straight one. A hockey stick is thin and curved at the bottom while a cricket bat is thicker, wider, and straight with the width fixed to four inches. Earlier it was cut out of a single piece of wood. Now it consists of two pieces, the blade and the handle.

Solution 1
(i) True
(ii) True
(iii) False
C.K. Nayudu was India's first Test captain.
(iv) False
When it played its first Test, Australia was not a sovereign nation. It was still a white-settler colony.

Solution 1-C C
The opposite of 'professional' is 'amateur'.
Solution 1
Cricket, hockey, baseball, and polo are a few stick-and-ball games.
Solution 2-C C
Here, 'triumph' means the one-day game's popularity among viewers.
Solution 2
The Parsis were brought into close contact with the British because of their interest in trade. They were also the first Indian community to get westernised. Hence, they were the first Indian community to take to cricket and founded the first Indian cricket club the Oriental Cricket Club in Bombay in 1848.
Solution 3-C C
It implies that cricketers are like actors and every cricket ground is like a stage on which the drama of cricket is enacted the world over.
Solution 3
The white cricket elite in India offered no help to the enthusiastic Parsis and a rivalry existed between the two. The 'happy ending' refers to the victory of a Parsi team over the Bombay Gymkhana-a whites-only club in a game of cricket in 1889, just four years after the foundation of the Indian National Congress in 1885.
Solution 4
Yes, cricket owes its present popularity to television. Television coverage changed cricket. It expanded the audience for the game by bringing cricket into small towns and villages. It also broadened cricket's social base. Children, who had never previously had the chance to watch international cricket because they lived outside the big cities, could watch and learn by imitating their heroes. Thanks to the technology of satellite television and the world wide reach of multinational television companies’ a global market was created for cricket. Matches in Sydney could be watched live in Surat. Cricket, as a result, became available to everyone and thus, gained a lot of popularity.
Solution 5
Cricket is not a popular team sport in many countries, e.g., China, Russia. Due to the lack of popularity, its viewership in these countries is also very little. Similarly games like rugby and baseball do not enjoy a large viewership in India. However, games like cricket, soccer and hockey are different. These games are hugely popular in India because they are played at the grass root level. The greater part of the Indian population has grown up playing these games, and therefore, has a good amount of knowledge about them. Besides television coverage has today reached every small town and village in the country and children who had never before had the chance to watch international cricket are now enthusiastic to watch and learn from their heroes.
Solution 6
The game's 'equipment' refers to the tools used in cricket such as the bat, ball, stumps, gloves, pads, etc. The most important tools are all made of natural, pre-industrial materials. Even today both the bat and ball are handmade not industrially manufactured. The bat consists of two pieces, the blade which is made out of the wood of the willow tree and the handle which is made out of cane. Cricket had refused to remake its tools with industrial or man-made materials such as plastic, fibre glass and metal. But in the matter of protective equipment, cricket has been influenced by technological change. The invention of vulcanised rubber led to the introduction of pads in 1848 and protective gloves soon afterwards. Now, cricket is unimaginable without helmets made out of metal and synthetic lightweight materials. 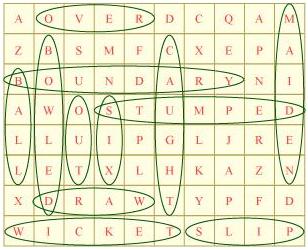 Solution 2
(i) It is obvious that the work has not been done properly.
(ii) He made the statement firmly.
(iii) The job can be completed within a week easily.
(iv) You did not play seriously, or else you would have won the match.
(v) She recited the poem cheerfully.
Solution 3
(i) Actually, I didn't intend to come to your place. I reached here by accident.
(ii) Sunil, there's a letter for you in today's post. There's one for me as well.
(iii)  Everybody thought I had composed the poem. As a matter of  fact, my younger sister did it.
(iv) The doctor told the patient to see to it that he took his pills on time.
(v) We had better plan our trip before setting out.