(a) The shape of the earth is like a sphere; however, it is not a perfect sphere. It is slightly flattened at the North and the South Poles and has a bulge in the centre.

(b) Globe is a small spherical model which serves as a miniature form of the earth.

(d) The three heat zones of the Earth are:

(e) Parallels of Latitude – These are all the imaginary parallel circles from the equator to the poles.

Meridian of Longitude – These are imaginary set of semi-circle lines that run from North Pole to South Pole.

(f) Torrid Zone receives the maximum amount of heat because:

(ii) The mid-day sun exactly falls overhead in this area. 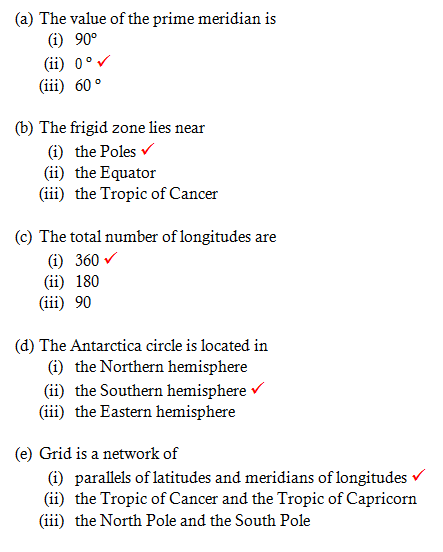 (a) The Tropic of Capricorn is located at 23 ½o south of the Equator.

(c) The 0o Meridian is also known as the Prime Meridian.

(d) The distance between the longitudes decreases towards the poles.

(e) The Arctic Circle is located in the Northern hemisphere.