The ovule is an integumented megasporangium which encloses an embryo sac. The anatropous ovule is the most common type of ovule found in angiosperms. Structure of the anatropous ovule:

In majority of the angiosperms, out of the four megaspores in a linear tetrad, three degenerate and only one remains functional. The functional uninucleated megaspore undergoes three mitotic divisions to form an 8-nucleated, 7-celled embryo sac. This development of the female gametophyte or the embryo sac from a single uninucleated functional megaspore is called monosporic development. 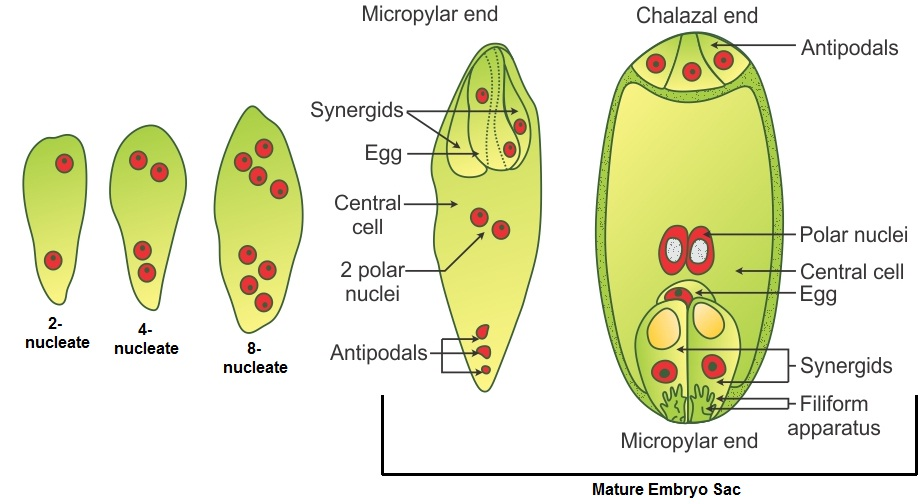 Cross-pollination cannot occur in cleistogamous flowers as such flowers are closed and do not open at all. Therefore, their anthers and stigma are never exposed. Thus, the transfer of pollen grains from outside to the stigma of the flower is not possible.

Self-pollination causes a decline in the vigour and vitality of the race. Hence, flowering plants have developed many devices to avoid self-pollination and to promote cross-pollination.

The inability of certain functional male and female gametes, even from genetically similar plant species, to fuse with each other and produce viable seeds is called self-incompatibility. It is a genetic mechanism to prevent self-pollination resulting in highly homozygous individuals with low survival value.

Self-pollination does not lead to seed formation in self-incompatible species because of the interaction of the chemical substances produced by the male gametophyte and the tissue of the style which obstruct fertilisation (pollen–pistil interaction). The chemicals inhibit the germination of pollen grains and the further growth of the pollen tube so as to avoid inbreeding and to help outbreeding.

During artificial hybridisation, the anthers of bisexual flowers are removed in the bud condition. These emasculated flowers are then covered with butter paper or polythene to prevent contamination of their stigmas from foreign unwanted pollen. This process is called bagging. When the stigmas of the bagged flowers attain receptivity, mature pollen grains are collected from the anther of the desired male parents and dusted on the stigmas. The flowers are then rebagged and fruits are allowed to develop.

Advantages of the bagging technique:

During double fertilisation in an angiospermic flower, one of the male gametes fuses with two polar nuclei located in the central cell and forms the triploid primary endosperm nucleus (PEN) As this involves the fusion of three haploid nuclei, it is termed triple fusion.

This process occurs in the central cell of the embryo sac of an ovule. The pollen tube containing two male gametes enters the ovule through the micropyle. Of the two gametes, one joins with the egg cell resulting in the production of zygote and the other with the secondary nucleus (formed by the fusion of two polar nuclei) producing a triploid primary endosperm nucleus. This is called triple fusion. In triple fusion, two polar nuclei and one male gamete are involved.

Differences between coleoptile and coleorhiza:

Differences between integument and testa:

Differences between perisperm and pericarp:

When the fruit is derived from the ovary along with other accessory floral parts, it is called a false fruit or pseudocarpic fruit. This is true for apple where the thalamus grows to form the fleshy edible part of the fruit along with the ovary.

In apple and cashew, false fruit formation involves the thalamus of the flower, while true fruits develop only from the ovary.

Emasculation is the process of removal of anthers from the flower bud before the anther dehisces from bisexual flowers without affecting the female reproductive structures.

Plant breeders employ this technique for artificial hybridisation for crop improvement programmes to prevent self-pollination and promote cross-pollination. To remove anthers, the flowers are covered with a bag before they open to avoid self-pollination. This ensures that the flower is pollinated by pollen grains obtained from desirable varieties only. The matured, viable and stored grains are dusted on the bagged stigma to allow artificial pollination to occur and to obtain the desired plant variety.

Parthenocarpic fruits are seedless. They develop from the ovary without fertilisation. Fleshy fruits such as watermelon, orange, banana, grapes and lemon should be selected to induce parthenocarpy because the seeds are scattered within the edible parts in these fruits. These seeds act as irritants while consuming these fruits. Hence, if the seeds of these fruits are removed, they become even more valuable.

The tapetum is the innermost wall layer of the microsporangium.

Role of the tapetum in the formation of the pollen grain wall:

Apomixis is a form of asexual reproduction which mimics sexual reproduction by the production of seeds directly from the diploid cells of the nucellus or integuments without fertilisation. It is common in grasses and species of the Asteraceae family.