Diapause is a stage of suspended development under unfavourable conditions. Example: Many zooplankton species in lakes and ponds undergo this suspended development under unfavourable conditions, whereas hibernation is the winter sleep which refers to the spending of winter in a dormant state by some organisms. Example: Frog is a cold-blooded animal. During severe cold, it buries itself deep in the mud.

No. A marine fish kept in fresh water will not be able to survive because of the outside hypotonic environment and osmoregulation problems.

i.Reduction in the amount of free water.

ii.Occurrence of branched chain lipids which reduce fluidity of the cell membrane.

Modification of leaves into thorns and development of spiny margins on leaves. Many plants produce and store chemicals which make herbivores sick. Example: Calotropis produces highly poisonous cardiac glycosides. Some other chemical substances such as nicotine, quinine, opium etc. are produced by plants and provide defence against grazing animals.

It is an example of commensalism, where the orchid gets space (benefitted) and the mango tree is neither benefitted nor harmed.

The ecological principle behind the biological control of pest insects is based on the ability of a predator to regulate the prey population in that habitat. Example: Gambusia fish prey upon the larvae of mosquito and acts as biological controller of malaria.

(a) Adaptations of desert plants and animals: Many desert plants have a thick cuticle on their leaf surfaces and have their stomata arranged in deep pits to minimise water loss by transpiration. They also have a special photosynthetic pathway (crassulacean acid metabolism CAM) which enables their stomata to remain closed during the day time. Some desert plants, such as Opuntia, have no leaves. The leaves are reduced to spines. The photosynthetic function is taken over by the flattened stems.

Animals living in the desert have a thick skin to prevent water loss. They concentrate their urine to conserve water. Camels have padded feet which enable a smooth walk in the desert. The kangaroo rat in North American deserts is capable of meeting all its water requirements through its internal fat oxidation in which water is a by-product.

(b) Adaptations of plants to water scarcity: Plants in water scarce areas are called xerophytes. Adaptations of xerophytes include reduced permeability of the epidermal layer, stomata and cuticle to maintain optimal amounts of water in the tissues by reducing transpiration, adaptations of the root system to acquire water from deep underground sources or directly from humid atmospheres (as in epiphytic orchids) and succulence, or storage of water in swollen stem, leaf or root tissues. The typical morphological consequences of these adaptations are collectively called xeromorphism.

(c) Behavioural adaptations in animals: Some animals show behavioural adaptations by moving away temporarily (migration) from a stressful habitat to a more hospitable area and return when a stressful period is over. The best example of this is shown by migratory Siberian cranes. During winters, they migrate to India because Indian lakes are full of water and sufficient prey during this period. When winter is over, Siberian cranes return to their native land.

(d) Importance of light to plants: Autotrophic plants produce food through photosynthesis, a process which is only possible when sunlight is available as a source of energy. Many species of small plants (herbs and shrubs) growing in forests are adapted to photosynthesise optimally under low light conditions because they are constantly overshadowed by tall, canopied trees. Some plants are also dependent on sunlight to meet their photoperiodic requirement for flowering.

(e) Effect of temperature or water scarcity and the adaptations of animals: In most animals, the metabolic reactions function optimally in a narrow temperature range. However, there are a number of microbes which live in hot springs where temperature is more than 100C. They have branched chain lipids in the cell membranes and special resistant enzymes which deal with the high temperatures of their habitat. Similarly, during water scarcity, the kangaroo rat undergoes internal fat oxidation in which water is a by-product. It has the ability to concentrate its urine so that minimal volume of water is used to remove excretory products.

(a) An endothermic animal: Human being (Mammal)

(b) An ectothermic animal: Frog (Amphibian)

Population: A population is the collection of interbreeding organisms of a particular species living together in the same geographical area at a time.

Community: A community is a group of organisms belonging to several different species which live together in the same area or habitat and interact through trophic and spatial relationships.

(a) Commensalism: Commensalism is an interspecific interaction between two species where one species is benefitted and the other remains unaffected. Example: Orchid and mango tree.

(b) Parasitism: It is a relationship between two organisms where the larger animal is at harm and the smaller animal is benefitted. Example: Malarial parasite and human beings.

(c) Camouflage: Camouflage is the ability of animals to blend with the surroundings or background. In this way, animals remain unnoticed for protection or aggression. Example: Stick insect.

(d) Mutualism: It is relationship between two organisms where both organisms are benefitted. Example: Fungal symbiotic association with algae in lichens.

(e) Interspecific Competition: It is an interaction between individuals of two species where both the interacting species are affected. Example: Monarch butterfly and Queen Monarch. 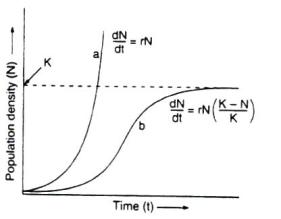 a - When responses are not limiting the growth, the plot is exponential.

b - When responses are limiting, the growth plot is logistic. K is the carrying capacity.

(d) One organism is benefitted, other is affected.

Three important characteristics of a population are

i.Density: It is expressed as the total number of individuals per unit area or volume at a given time. The size of the population is determined by the available resources nutrients, water etc. at a given time and other group properties such as natality, mortality and age structure.

iii.Mortality: The loss of individuals due to death in a population under given environmental conditions is called mortality.