(b) Humans are viviparous.

(c) Fertilisation is internal in humans.

(e) A zygote is diploid.

(f) The process of release of ovum from a mature follicle is called ovulation.

(h) The fusion of male and female gametes is called fertilisation.

(i) Fertilisation takes place in ampulla of oviduct.

(j) The zygote divides to form blastocyst which is implanted in the uterus.

(k) The structure which provides a vascular connection between the foetus and the uterus is called placenta. 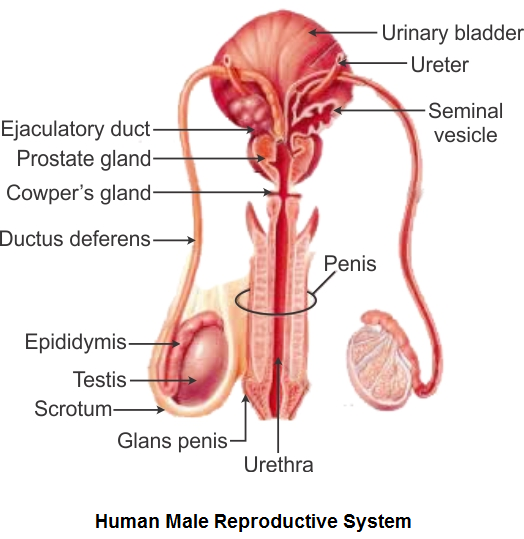 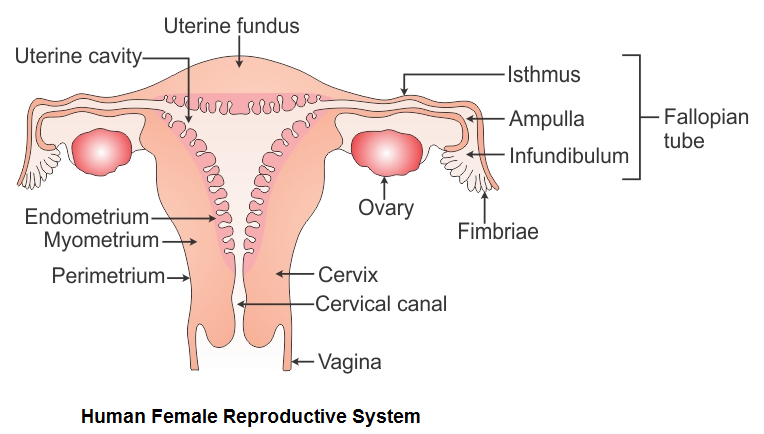 Functions of the testis:

Functions of the ovary:

Structure of the seminiferous tubule: 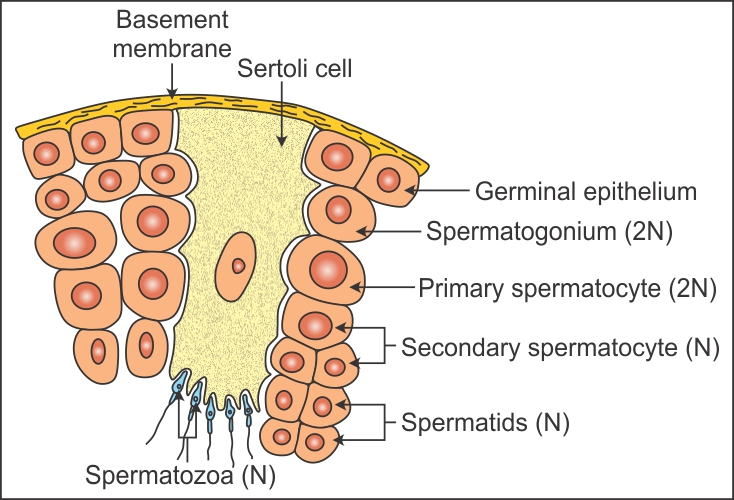 Spermatogenesis is the process where diploid sperm mother cells or spermatogonia in the seminiferous tubules of the testes change into haploid, microscopic and motile male gametes or spermatozoa. It is a stepwise process and occurs continuously in the testes which lie outside the abdomen and in the scrotum of human males. Spermatogenesis includes the formation of spermatids and spermatozoa.

Formation of spermatozoa from spermatids:

Spermiation is the process of release of mature spermatozoa from the Sertoli cells into the lumen of the seminiferous tubules of the testes. 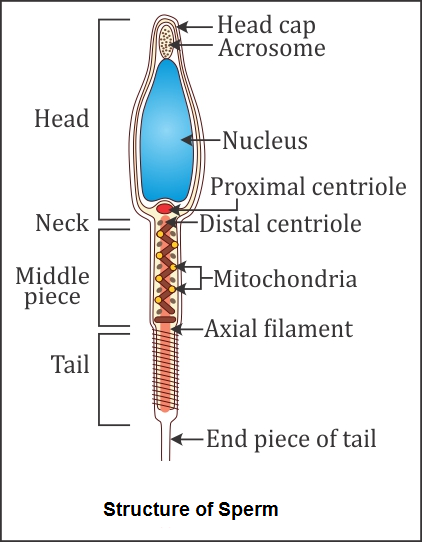 The seminal plasma or seminal fluid carries the secretions of the accessory sex glands of males, i.e. seminal vesicles, prostate gland and bulbourethral glands. Its main components are

Oogenesis is the process of formation of haploid female gametes called ova from diploid oogonia in the Graafian follicles of the ovary. It is a discontinuous process which starts during the period of foetal development but is completed only after the onset of puberty. 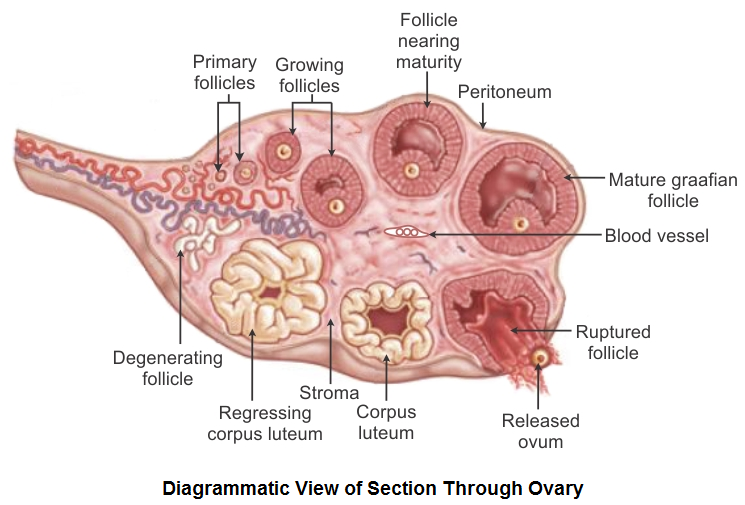 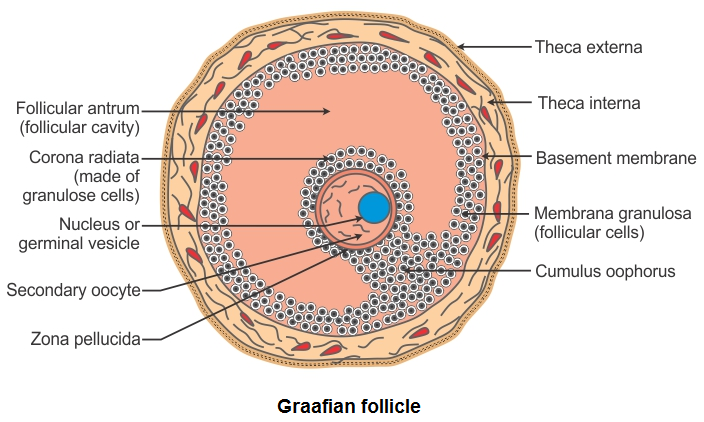 (a) Corpus luteum: It acts as an endocrine gland and secretes the hormone progesterone which prepares the uterine endometrium for implantation, placentation and normal development of the foetus and thereby maintains pregnancy.

(b) Endometrium: It is the innermost, highly vascular and glandular lining of the uterus. It undergoes cyclic changes during the different phases of the menstrual cycle to prepare itself for the implantation of the blastocyst and placentation.

(c) Acrosome: It secretes sperm lysins such as hyaluronidase, corona penetrating enzyme and acrosin. These hydrolytic enzymes help contact the ovum, dissolve its membranes and finally penetrate it for fertilisation.

(d) Sperm tail: It helps in the movement of spermatozoon in the female genital tract for fertilisation. It produces lashing movements which provide forward push to the sperm.

(e) Fimbriae: These are finger-like projections present on the margins of the infundibulum. They bear cilia which beat towards the ostium for the collection of ovum from the ovary after ovulation.

(a) False. Androgens are secreted by Leydig cells or interstitial cells.

(c) False. Leydig cells are found in regions called interstitial spaces outside the seminiferous tubules of the testis.

(e) False. Oogenesis takes place in the Graafian follicle of the ovaries.

The menstrual cycle in human females starts at the age of puberty and carries on up to menopause. During this cycle, the ovaries, uterus and fallopian tubes undergo several regular cyclic changes because of the influence of the pituitary hormones so that the fertilised ovum is implanted. If fertilisation fails to occur, then the corpus luteum of the ovary degenerates and progesterone and oestrogen secretion stop, leading to a fresh start of the menstrual cycle. This cycle is usually repeated after 28 days and lasts for 3–5 days.

Role of hormones in the menstrual cycle:

Parturition is the process of expulsion of the fully developed foetus from the mother’s uterus after the gestation period. Oxytocin and relaxin are involved in the induction of parturition.

Role of hormones in induction of parturition:

Oxytocin: It acts on the uterine muscles and induces forceful contractions of the myometrium of the uterus leading to the expulsion of the baby.

Relaxin: It causes relaxation of the pelvic ligaments and widens the pelvis to facilitate easy childbirth.

Generally, only one egg (rarely two) is released by human ovaries in a month.

In case of identical or monozygotic twins, one egg is released which divides into two after fertilisation, thus giving the same genetic features.

In case of fraternal or dizygotic twins, two eggs are released and get fertilised by two different sperms. So, the genetic characters of fraternal twins are always different.

To give birth to six puppies, six eggs must have been released by the ovary of a female dog. Therefore, six zygotes would have been formed, each of which developed into a puppy.