The substrate DNA on which a restriction enzyme acts:

The products it produces:

The molecular size of DNA molecules is more than that of enzymes. It is because an enzyme (protein) is synthesised from a segment of DNA called the gene.

No. Eukaryotic cells do not have restriction endonucleases. All the restriction endonucleases have been isolated from the various strains of bacteria and they are also named according to the genus and species of prokaryotes. The first letter of the enzyme comes from the genus and the second two letters come from the species of the prokaryotic cell from which they have been isolated. For example, EcoRI comes from Escherichia coli RY 13. In EcoRI, the letter 'R' is derived from the name of the strain. Roman numbers following the names indicate the order in which the enzymes were isolated from that strain of bacteria.

Shake flasks are used for growing microbes and mixing the desired materials on a small scale in the laboratory. However, the large-scale production of a desired biotechnological product requires large stirred tank bioreactors.

Besides better aeration and mixing properties, bioreactors have the following advantages:

i. It has an oxygen delivery system.

ii. It has a foam control, temperature and pH control system.

iii. Small volumes of culture can be withdrawn periodically.

A recombinant DNA is made in the pachytene stage of prophase I by crossing over.

Reporter enzyme can differentiate recombinants from non-recombinants on the basis of their ability to produce a specific colour in the presence of a chromogenic substrate. DNA is inserted within the coding sequence of the enzyme β-galactosidase. This results into inactivation of the enzyme which is referred to as insertional inactivation.

The presence of a chromogenic substrate gives blue-coloured colonies if the plasmid in the bacteria does not have an insert. The presence of the insert results in insertional inactivation of β-galactosidase and the colonies do not produce any colour. These are identified as recombinant colonies.

(a) Origin of replication (ori): This is a sequence from where replication starts and any piece of DNA when linked to this sequence can be made to replicate within the host cells. This sequence is also responsible for controlling the copy number of the linked DNA. So, if one wants to recover many copies of the target DNA it should be cloned in a vector whose origin supports a high copy number.

(b) Bioreactors: Bioreactors are vessels in which raw materials are biologically converted into specific products, individual enzymes etc. using microbial plant, animal or human cells. A bioreactor provides the optimal conditions for achieving the desired product by providing optimum growth conditions (temperature, pH, substrate, salts, vitamins, oxygen). The most commonly used bioreactors are of stirring type. A biogas plant is a good example of a bioreactor.

(c) Downstream processing: After completion of the biosynthetic stage, the product is subjected through a series of processes before it is ready for marketing as a finished product. The processes include separation and purification, which are collectively referred to as downstream processing. The product has to be formulated with suitable preservatives. Such formulation has to undergo thorough clinical trials as in the case of drugs. Strict quality control testing for each product is also required. Downstream processing and quality control testing vary from product to product.

(a)PCR: PCR stands for polymerase chain reaction. In this reaction, multiple copies of the gene of interest are synthesised in vitro in three steps:

i.Denaturation: Double-stranded DNA is converted to single-stranded DNA, often achieved by heating or alkaline conditions. This is called 'melting' of DNA.

ii.Annealing: The two sets of primers undergo the biochemical process of annealing at an optimum temperature of 40-65C.

iii.Extension: The enzyme DNA polymerase extends the primers using the nucleotides provided in the reaction and the genomic DNA as the template. 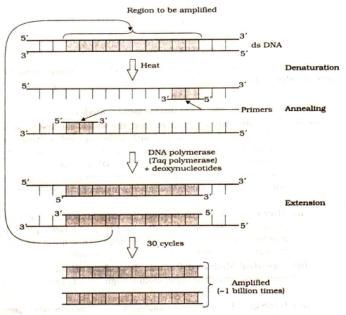 If the process of replication of DNA is repeated many times, the segment of DNA can be amplified to approximately a billion times. Such repeated amplification is achieved by the use of a thermostable DNA polymerase and the amplified fragment if desired can be used to ligate with a vector for further cloning.

(b) Restriction enzymes and DNA: Restriction enzymes are synthesised by microbes as a defence mechanism and are specifically endonucleases which cleave the double-stranded DNA with the desired genes. This activity occurs at a limited number of sites depending on the number of recognition sequences in DNA. Lysing enzymes, synthesising enzymes (DNA polymerase and reverse transcriptase) and ligases are also tools of genetic engineering.

(c) Chitinase: During the isolation of DNA in the processes of recombinant DNA technology, the fungal cell is heated with an enzyme called chitinase. The chitinase enzyme dissolves the chitin membrane to open the cell for release of DNA along with other macromolecules such as RNA, proteins, polysaccharides and lipids.